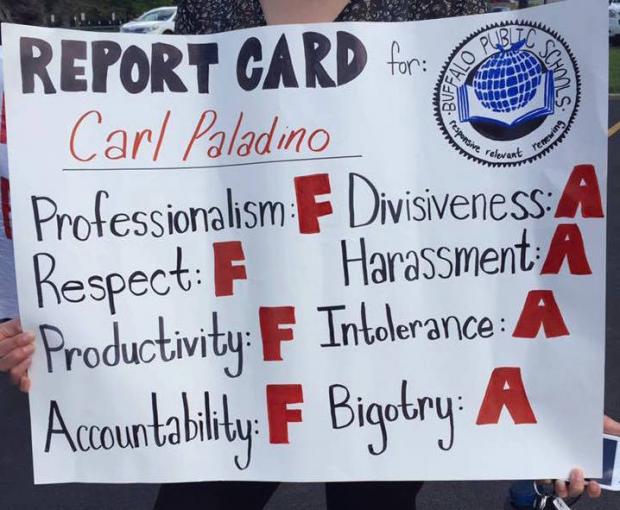 On June 22, 2017, we, as Buffalo Public School parents, ventured to Albany to attend the NY State Education Department Commissioner’s hearing on the Buffalo Board of Education’s 306 Petition to remove Carl Paladino from the Buffalo BOE. To be clear, the only allegation brought before the Commissioner in the BOE 306 Petition and examined in the hearing was Paladino’s divulging of confidential information.

At the hearing, we observed Paladino’s representing legal counsel, led by attorney Dennis Vacco, make several dubious allegations about the Buffalo BOE violating the Open Meetings Law, in an attempt to deflect attention and responsibility for Paladino’s blatant divulging of confidential information from BOE executive sessions. Outrageously, unlike any other local media covering the hearing, the Buffalo News has repeatedly presented these allegations as the predominant narrative in their reporting. Worst of all, they are not just reporting these as allegations, but concluding for the public that the BOE held “illegal private sessions” leading the public to falsely believe that the Buffalo BOE is in absolute disarray. This is a convenient narrative for Paladino and his wealthy allies to prey upon.

Here’s the run-down of Buffalo News articles in question:

Rod Watson: Paladino hearing sheds light on board’s love of secrecy (June 29, 2017), which includes this nugget: “When his attorneys flayed President Barbara Seals Nevergold over the board’s illegal private sessions, it revealed a public body that routinely insults the public by hiding in executive session without properly disclosing the reasons.”

Editorial: School Board treats the right to know with disdain, in which the News Editorial Board takes Paladino’s side (July 1, 2017).

The New York State Open Meetings Law makes it clear when a public body can enter into executive session, under eight different purposes. These include: litigation; collective negotiations; and personnel matters. The 306 petition argues that Paladino divulged information from each of these areas of executive sessions.

Vacco made the claim that the BOE illegally entered into executive sessions. This claim was capricious at best and easily and clearly refuted by the BOE Attorney Frank Miller. From video shown by the Paladino legal team, BOE members willingly authorized and entered into executive sessions, including Mr. Paladino. No objection was ever made by any BOE Member, nor was any unofficial or official complaint ever made.

Vacco and his legal team also made the claim that seven BOE Members held an “illegal private meeting,” closed to the public with their hired legal counsel, Frank Miller, on January 17, 2017. This meeting included BOE Member Patti Pierce. First, it’s important to gain an understanding for the chronology of events. On January 4, 2017, in an open, public meeting, the BOE approved the appointment of Frank Miller as their legal counsel, to advise the BOE on filing a 306 Petition with the Commissioner. BOE Member Pierce voted in the affirmative on the appointment. Upon this, particular BOE members became clients represented by Miller in this matter.

As a result, just like any other client, they obtained the right to meet privately with their attorney for advice under attorney-client privilege. From testimony in the hearing, this was exactly the purpose of the January 17 meeting, which BOE members Larry Quinn and Carl Paladino were excluded from, as they had not voted to obtain outside counsel. It’s important to note that no official BOE action was taken at this meeting.

On January 16, 2017 a resolution was made publicly available on the Buffalo Public School District website. We know this because we posted it to the Buffalo Parent-Teacher Organization Facebook page. This resolution was then presented and voted on in an open, public meeting on January 18, 2017. The resolution approved the filing of a 306 Petition for Paladino’s removal based on divulging confidential information. Miller argued well in the hearing how his clients have every right to a private meeting for the purposes of legal advice. Miller affirmatively stated that this is an exemption in the Open Meetings Law. The Open Meetings Law makes an exemption for “any matter made confidential by federal or state law,” and the attorney-client privilege applies (4503 Civil Practice Laws and Rules). Under the News’ false premise that this meeting was “illegal,” they should then also be claiming that Vacco should have invited all BOE Members to his private meetings that he had with his client, and should characterize each of these meetings as “illegal private sessions.” 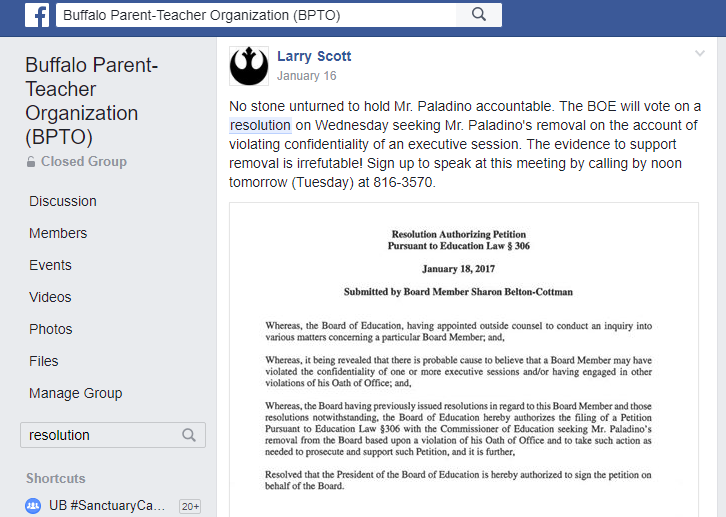 Beyond the smoke and mirrors

Paladino blatantly divulged confidential information from executive sessions pertaining to contract negotiations, litigation, and a personnel matter. It was all in print, but at the hearing he unabashedly admitted to doing so under oath. He, and BOE Members Quinn and Pierce, argued that they believed confidential information on contract negotiations could be divulged because the teacher’s contract was settled. Yet, they could cite no law or policy showing an expiration to upholding confidentiality of this information, nor could they cite a BOE ruling to divulge the information.

Both Quinn and Paladino have endlessly justified the divulging of the confidential information to inform the “public” of the “rigged” teacher’s contract. But yet, to this day, we haven’t seen or heard any public outrage, with the exception of the Buffalo News editorial Board, on Buffalo teachers now getting a fair contract.

As two petitioners of the Buffalo Parent-Teacher Organization 306 Petition, also before the commissioner, we remain resolute that Paladino needs to be removed for his breach of duty to ensure that Buffalo children receive an education free of racism and harassment, along with divulging confidential information from BOE executive sessions. It’s more than time for the commissioner to prevent Paladino from ever making decisions for our Buffalo Public Schools and our children again. We have work to do, and Paladino has made himself an ineffectual barrier to and a distraction from the completion of that work. That the Buffalo News has picked up and perpetrated the narrative of dysfunction, rather than listening to everyone except Paladino, Quinn, and Pierce, is an abomination of journalistic integrity.