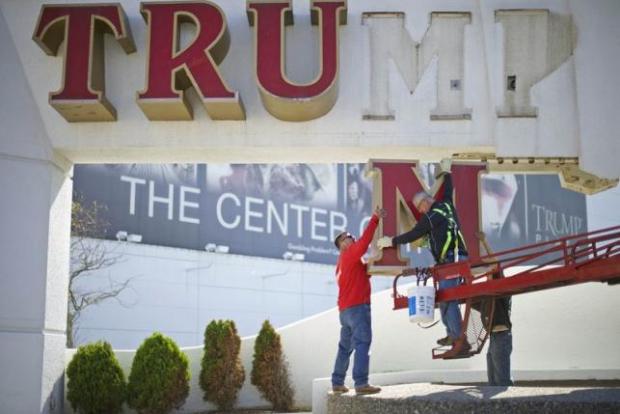 The tarnished brand of a hateful man. Photo credit: Reuters
by
Alan Bedenko
/ Jul. 3, 2015 6am EST

Donald Trump is one of the best cartoon characters of recent times — even Scrooge McDuck seems like a reasonable guy by comparison. McDuck might dive into a pool of gold coins, but he’s known for his frugality. Donald Trump is the flashy caricature of the nouveau riche asshole who gold-plates everything and preens around like an Arab Sheikh.

As Trump does palpable harm to what’s left of his brand and the Republican Party’s Latino outreach efforts, let’s not forget that in 2013 it was our own Republicans here in western New York who pushed Trump to run for Governor against Cuomo.  That’s a terrifying threat to replace the wild, unchecked egotism of Andrew Cuomo with a wealthy walking id.

Donald Trump will never be President. He is a construct of the media and he’s polling well with Republican primary voters, but wildly disliked overall. Trump’s rise in the poll is him being patted on the back by the same people who are angry about the Confederate Flag, same sex marriage, and the people still clamoring for Obama to be removed from office for being an Indonesian Kenyan Manchurian candidate usurper. He is the candidate of anti-intellectual America, and the defeatist white male upstate voter with a “repeal NY SAFE Act” lawnsign; Cuomo is the devil, and Obama isn’t even human. They aspire to be just like Donald Trump, and they love that he thinks like they do – and he has the money and name recognition to not care what anyone thinks.

Donald Trump would accomplish nothing. He would do nothing for education, for the poor, for upstate’s economic malaise, for Buffalo, or for anyone except the tea party and the ultrarich. The headlines related to the upstate effort to recruit Trump for governor should have read, “Lawmakers to Massage Trump Ego, Trump Reacts Favorably”.

However, Trump has done irreperable damage to his brand (and that of his children). His outrageous and false defamation of Mexican immigrants have prompted numerous people and companies to completely abandon the tarnished “Trump” name. For once, Trump is learning that the 1st Amendment and $4 billion in the bank can’t protect you from the very real, public consequences of the false and outrageous things you say. Macy’s and other companies have a business to run, and they simply can’t afford to be associated with a bigot.

The Trump name used to stand for opulent, rococo luxury. For most people with some taste, it was always over the top; kitsch, but quality kitsch. He’s always been a colorful public figure, brash and opinionated. But with his political behavior, he has taken the Trump name and essentially thrown it in the toilet.

He has now supplanted Orly Taitz as American birther-in-chief. His anti-Obama public political pronouncements have been false, offensive and loaded with thinly veiled racial animus – claiming that the President is foreign, socialist, evil, doesn’t have America’s best interests at heart. Even many Obama detractors who think his policies are wrong would concede that he hasn’t led the country over the last four years like the Bolshevik some make him out to be.

Trump throws shade at Mitt Romney and Jeb Bush, but Romney used Trump as a surrogate; Trump is disloyal and has a constituency of one.

Over the past few years, Trump has polarized customers and voters, and ruined a formerly strong brand. Adopting crazy, fringe political viewpoints and broadcasting them in a way that is equal parts arrogance and ignorance won’t win him the Presidency, and will only deepen the already-extant boycott of his products. He’s also a hypocrite, bemoaning the very free trade deals that made it economically smart for him to exploit cheap labor and manufacture suits in Mexico and ties in China.

Trump is one of about 15 Republican Presidential hopefuls, and he not only threatens the viability of his own brand, but the Republican brand in general. The more nonsense that comes out of his unfiltered mouth, and the more he beats up on the most vulnerable and powerless in our society, and the more he demeans his fellow candidates, you’d not be crazy to think that he might actually be a liberal plant setting up the GOP for self-immolation.

Enjoy the ride, Republicans, but remember that whatever Trump’s doing, he’s only in it for Trump.