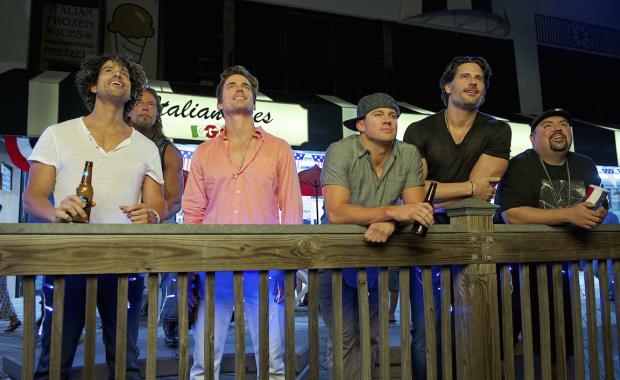 Several years ago, not long before the still-young Stephen Soderbergh announced his retirement from feature-film direction (strictly speaking a vow he hasn’t kept; he’s done an HBO biopic about Liberace), he directed an inexpensive little B‑movie about male strippers, Magic Mike. Produced for an almost ludicrously low $7 million, it brought in 16 times that amount just in the US. And as I wrote then, it was a surprisingly painless experience—a lightly entertaining one, in fact.

Matthew McConaughey was the most prominent player, portraying Dallas, a lubriciously unctuous and vaguely sleazy strip-club owner, but the biggest attraction turned out to be Channing Tatum as the title character. Supposedly Tatum was a very youthful “male entertainer” in real life and his routines in the movie had me convinced of that backstory’s authenticity. He was awesome.

He still is. At the “advanced” age of 35, he still manages to be toothsomely cute and super-athletically dynamic in the totally unnecessary but almost inevitable sequel to that movie, Magic Movie XXL. (And no, I don’t know what the title means.) He’s also virtually the only object of interest in this mangy dog.

The almost indiscernible storyline has Mike (Tatum) joining the dancers from his past, all abandoned by Dallas, for a European venture. They head to a Florida stripper’s “convention” for one last hurrah.

This one is essentially a road movie, if the most boring I can remember. There’s no point in my trying to summarize the plotting, it’s so silly and minimal.

This thing is so inept that none of the five other characters is even crudely convincing as a strip-joint entertainer. When Tatum does his stuff, the disparity is pitifully highlighted. (I have to report that the largely female audience at the preview hollered, hooted and laughed at the, shall we say, sexually candid performance numbers.) The movie renders men removing their clothing tedious—something of an accomplishment, I suppose.

When he retired, Soderbergh said he was tired of Hollywood’s crass, obstructionist ways. He produced this thing. ‘Nuff said?