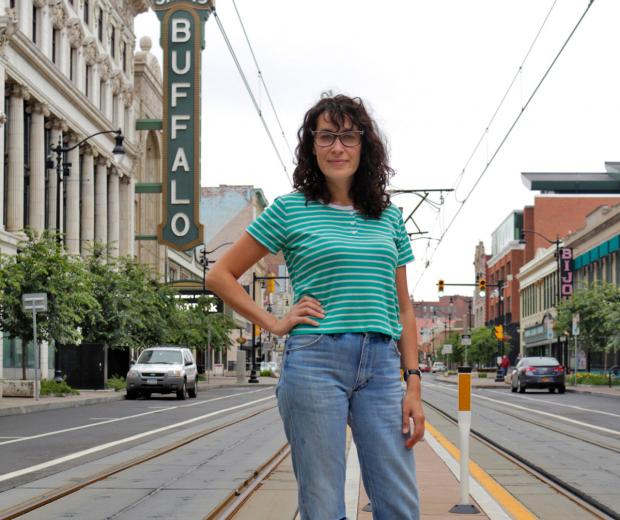 Ever get the feeling you’d like to be a foundation? Like the Rockefeller Foundation or the Ford Foundation? Not just to have all that money to throw around, but to actually do something good with it, accomplish something, something tangible. Like fund individual artists’ residencies and associated art projects.

Tina Dillman isn’t rich. She just got out of school, with an MFA degree and substantial school debt, and moved to Buffalo from San Francisco—partly because it’s so much cheaper to live here, but more because when she visited she saw so much going on, in the arts, in the whole city revitalization, the ferment—and has started her own artists’ residency program. On a shoestring or less. Out of her own residence. A house she rents on Grant Street. The residency program is called Project Grant.

The current program season is in three parts. The fruits of the first part—artwork of aspiring kid artists following free instructions by Project Grant artists at a West Side park on consecutive Saturdays last month—are currently on display at Buffalo Arts Studio. Part two—currently underway—includes free art instruction at the Old First Ward Community Center. The instructees’ work will be unveiled at the City of Night festival—being held in the Old First Ward this year—July 18. Part three will be a performance work, tentatively set for early September. Still somewhat in the planning stage.

Dillman said she realized during the course of her undergraduate studies—basically in painting—that for her making art wasn’t enough. “For me,” she said, “it’s important to provide opportunities for other artists. It’s part of who I am.”

She added that she also has a problem with the whole idea of commodity art. Art made for sale and purchase. Which is a little the same as art made for galleries. “It’s important for me, too,” she said, “that art be accessible to everyone.”

So that after finishing her undergraduate program, instead of making and trying to sell paintings, she got working with youth groups. Then a variety of art non-profits, first in Providence, Rhode Island, and then San Francisco. And eventually started her own art space in San Francisco, out of her house. “We did everything,” she said, “visual art, poetry, music, film, even a performance art dinner by a traveling chef.” Next, her MFA from the San Francisco Art Institute. Following which she won her own grant for a residency in Los Angeles.

But a family emergency brought her back to Central New York, where she had grown up and family still resided. The family emergency became protracted and she had to give up the LA gig. But meanwhile visited Buffalo on several occasions—she has relatives here, too—and realized this was the place for her and her evolving idea about what would become Project Grant.

So how is Project Grant funded? By Dillman herself, for the most part. She works several part-time jobs—as a program coordinator at Squeaky Wheel and putting together the art listings every week for The Public—to keep herself and the program going. In addition to lots of Project Grant sweat equity. “I wear all the hats,” she says, “program director, marketer, outreach coordinator, fundraiser…” The list goes on.

Also by some money donations—mostly quite modest—from individuals of good will, and supplies donations from Hyatt’s art store and Golden Artists Colors (a manufacturer of artists’ paints sold at Hyatt’s and elsewhere). Participants in the various instruction programs also get free supplies.

But funding is a continuing and major concern. Her website includes an appeal for contributions to Project Grant, as well as her personal appeal for work for hire—jobs from “hang out with kids and teach them cool things” to cook, clean, or “make a mean drink”—for a suggested $15 an hour. (Meanwhile, an official Project Grant fundraiser event is scheduled for July 24 at Ironworks, in the cobblestone district.)

Dillman has a neatly lettered tattoo on her upper right arm, reading: “I am not an object that can be bought or sold.” One of her teachers in art school interpreted the slogan—in a word—as “commitment.” She doesn’t reject the interpretation. “Yeah,” she says, “I’m committed.”