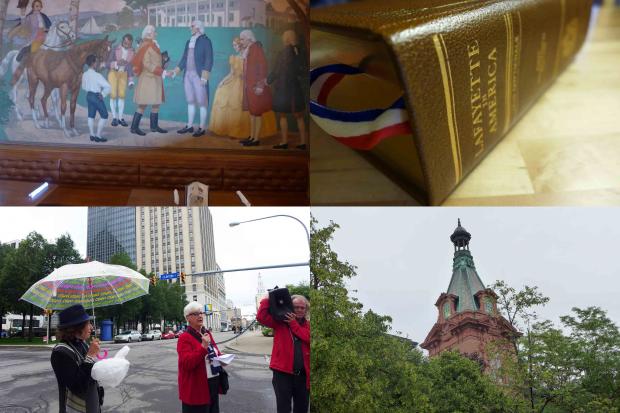 Aristocrat and military officer General Marquis de LaFayette (a.k.a. Marie-Joseph Paul Yves Roch Gilbert du Motier) took a grand tour of the United States in the early 19th century, on the invitation of US President James Monroe, the last of the American Founders.

One of the stops on his frenetic, 24-state tour was Buffalo: This month marks the 190th anniversary of this headline news of that day. LaFayette undertook this trip with his son, George Washington Lafayette.

On the noble rank chart a marquis is midway between an emperor (the toppermost) and a gentleman (the lowest). LaFayette was wealthy, French, and supportive of the colonial American fight for independence and representative governing: He volunteered his services for the cause. He was, therefore, friends of early governmental leaders and on his 1825 visit to Buffalo he was greeted as a star by war veterans, fans, and socialites.

The City of Buffalo named—and renamed—several places in his honor, as did several other places LaFayette visited on the 14-month tour. Historical accounts of the LaFayette souvenir industry during this time is that there was a frenzy to make, sell, and buy items showing his likeness.

The marquis is even loosely woven into this reporter’s family history. My grandfather, Edgar Plumsteel, ordered a special limited edition book, Lafayette in America by Louis Gottschalk, published during the bicenntenial year, for me. It’s a three-inch-thick tome (and unread, but revered). My mother, an alumna of Lafayette High School, taught my sister and I the school’s unforgettable cheer of the era: “Rickety ack, sko-ack, sko-ack, rickety ack, sko-ack, sko-ack, alla-balloo, how do you do, Lafayette!”

A short list of Buffalo places named for the General are: Lafayette High School, defunct Lafayette Theater, Lafayette Avenue (formerly Bouck Street), Hotel Lafayette, and Lafayette Square. The General arrived in Buffalo, rode in a parade down Main Street and gave a speech at Eagle Tavern, where he was entertained and slept before touring the Erie Canal under construction.

On June 28 Buffalo-Lille Association, an organization celebrating the relationship of these two sister cities as well as French culture in Western New York, held a luncheon and walking tour retracing LaFayette’s Buffalo visit. The group, led by president and Buffalo State College professor Jean Gounard, met at Hotel @ The Lafayette, underneath murals depicting Revolutionary War-era LaFayette and George Washington in the Pan-American Grill painted in the 1930s.

The tour was led by retired Buffalo librarian Judi Lopez del Moral, about a dozen began the tour outside of the hotel in a light rain. Pointed out from that spot were where the Eagle Tavern had stood, on the site of the former AM&A’s. Lopez del Moral noted the former historical site, and where other storied municipal buildings had once been. “There was a bronze plaque on AM&A’s for years,” Judi says, “and then it was moved in 1968 to the Liberty Bank Building, but now I don’t know what’s happened to it.”

From Lafayette Square the tour went north to Red Jacket’s monument in Forest Lawn Cemetery (a comrade of LaFayette’s), and breezed by Lafayette Presbyterian Church on Elmwood, Lafayette High School and then Lafayette Baptist Church on Grant Street. The plaque denoting the place where Peter Porer’s home stood on Niagara Street was a stop, and more stories were recounted of another marathon reception for LaFayette there.

Of the canal—and his reception in Buffalo—LaFayette said: “The very rocks rend to welcome me.” Buffalo has carried forth its grand traditions of hospitality and holding raucous receptions for stars of all ilks.