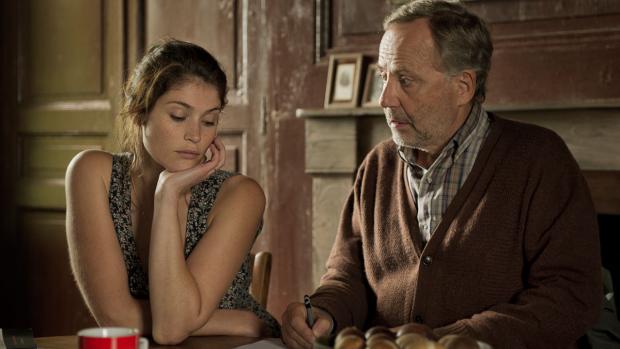 Some of the critical reaction to Anne Fontaine’s Gemma Bovery has expressed disappointment that the movie doesn’t provide any insights into Gustave Flaubert’s novel or his famously dissatisfied, personally reckless and doomed heroine. They’re right about this lack, but their objection is rather beside the point, not to mention a bit stuffy. The people behind this film don’t seem to have had any intention of seriously commenting on Madame Bovary, either the novel or the character. It’s a little hard to see how anyone could have confused the movie’s obvious comedic approach with any of Flaubert’s literary and social themes. There’s a wry, not-so-subtextual point of view at work as the picture rolls on to its mordantly witty resolution. Whether the execution is really successful is another question, but it’s a relevant one.

Gemma is a French film and it may seem more or less protypically Gallic in its casually humorous sexual vibe, but its origin was in a comic strip by Posy Simmonds in the British Guardian newspaper. (Simmonds’s take on Far from the Madding Crowd, Tamara Drewe, was also filmed in 2010). Gemma isn’t the central character, although she’s important. That role is taken by Martin Joubert (Fabrice Luchini), a middle-aged baker in small-town Normandy, and a devotee of Flaubert. It doesn’t take him long to begin identifying, and confusing, an English newcomer with the novelist’s creation. Gemma (Gemma Atherton) has come with her husband Charlie (Jason Flemyng), speaking little French and largely innocent about French culture and country life. She begins to rely on Martin’s advice and assistance, and he harbors an unacknowledged attraction to the younger woman. He also is increasingly haunted by his concern that she’s an incarnation of her near-namesake and headed for that one’s fate. His meddling only makes a holy mess of things, and leads to a wickedly witty denouement.

There’s a barely obscured irreverence percolating just beneath the movie’s surface events, not so much toward great literary works as to those who take them too seriously, or seriously in the wrong ways. Luchini is an economically deft actor and his Martin is creatively solid, but the general proceedings aren’t consistently enough amusing to give contextual shape to his performance.

An important and ironic part of the problem is that for all its sport with the literary classic, Martin’s ardor and obsession are a kind of literary conceit. His muddled sensibility is hard to treat cinematically. Gemma Bovery has its amusements, but it’s never quite as sharp as it wants to be.