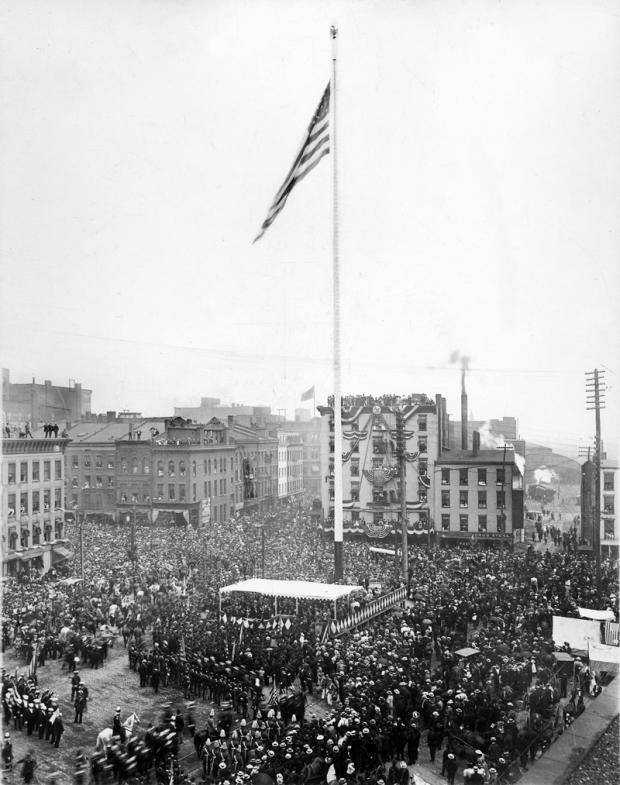 “Yesterday was, with one possible exception, the most glorious Fourth of July Buffalo ever saw. If one leaves out the day that witnessed the unveiling of the monument in Lafayette Park, yesterday certainly was the day of all days, all things combining to add to its glory.” – Buffalo Courier, July 5, 1895

The Liberty Pole No. 4 was dedicated on July 4, 1895, amid song, speech, and cheers. Here, at Main Street and The Terrace, thousands of people blockade the streets and gather on the rooftops. The Grand Army of the Republic lines up near the stand. As the American flag is raised and unfurled, the G.A.R. double quartet sings “Rally ‘Round the Flag, Boys,” accompanied by Miller’s band.

This Liberty Pole was the fourth and last in a series at The Terrace, the first being erected in 1838. It was also the tallest, a mast towering 175 feet above ground level. The pole weighed 13 tons, and was anchored on a 24-foot-diameter, 13-foot-deep concrete foundation. It was made of rolled steel plates from the furnaces of the Park Brothers of Pittsburgh. The plates were riveted in place by boilermakers employed at the Riter Brothers, corner of Indiana and Mary streets. “Long may it stand,” read the Buffalo Courier headline of July 5.

The Liberty Pole stood for another 44 years, rust spelling its end in 1939, when Mayor Thomas Holling ordered it taken down, with no replacement. The 400-pound bronze eagle was preserved and is now in the collection of the Buffalo History Museum. By 1959, the I-190 expressway cut through this former public space. Not one building in this photograph stands today.