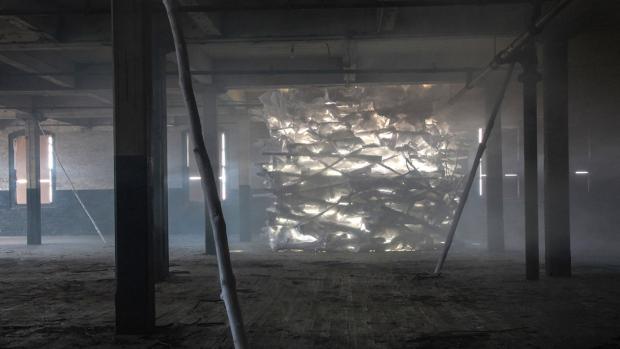 There’s something eerie in the darkness. Exactly what isn’t immediately clear. Your eyes strain to make out the scattered twigs and bark underfoot. What looks at first like leaning birch tree limbs, are actually branches shrouded in white paper, their natural skin encased in an unnatural one. In the center is a towering cylindrical structure improvised from loosely stacked tree limbs wrapped wildly in white paper and glowing like a demonic Japanese lantern. Light escapes from gaps in the covering, casting beams that slice like knives through the surrounding fog. A beacon? A sub-bass drone, more corporal than audible, penetrates your body. There’s a force here, emanating from somewhere—yet nowhere. In the distance, beyond a pile of tarp-covered branches, a doorway beckons you with a golden radiance. You walk toward the light like a moth to a flame, drawn partly by the intensifying hum that now begins to sound like otherworldly music. You think to yourself, I’m definitely in X-Files territory here.

Sounds like a scene from a movie, right? That was my reaction upon entering LAST EXIT, a site-specific “blind collaboration” project by artists Max Collins, David Mitchell, and the sound art group Flatsitter (Jax Deluca, Kyle Marler, Frank Napolski). It’s anybody’s guess whether this is what the artists intended—or what others experience. LAST EXIT is wide open to interpretation; no didactic wall text telling you what to think. The immersive installation is housed on the fourth floor of Hi-Temp Fabrication’s warehouse at 79 Perry Street, which has become something of a haven for artists in need of a large raw space to mount experimental work. You walk up narrow wooden stairs (or take the freight elevator), and you’re there.

The collaborating artists approached this project with an agreed-upon set of guidelines loosely inspired by the film Five Obstructions. In this instance, a more apt title might be “Five Conditions,” as these were compulsory guiding principles. To start, they agreed to work with the unifying theme of “meditations on nature.” They were also required to respond in some way to the unique qualities of the Hi-Temp building, and play-off the idea of “cinematic space.” They could discuss these concepts in general terms as they planned their work, but not reveal what they were doing individually. That would only be known upon installation. In such a collaboration, connections between individual components are left largely to chance. And of course, viewers will create their own associations.

The entrance to the voluminous industrial space is through Collins’ portion, described above, which feels like a movie set piece. There is a slightly different vibe when viewed during the day, with light leaking in through loosely covered windows, rather than the opening at night when I saw it. But it maintains an uncanny eeriness. An ethereal ambiance permeates the work, setting the tone for what comes next, though the offhanded appearance of the plastic-covered woodpile seems out of step with the exactness of the overall piece. Collins created this work in response to a personal tragedy, though it isn’t apparent in the final result. The convoluted path of the artistic process often leads to unforeseen destinations.

Visitors will hear a recorded version of the live Flatsitter performance from the exhibition’s opening. Deluca and Marler composed the backing audio elements, and Napolski did live mixing. At the opening, the three silver-masked players sat impassively at a table located in an open freight elevator, meditatively focused on their electronic equipment. Marler played acoustic guitar and Deluca contributed vocals. It felt like the control center to the exhibition.

The ethereal atmosphere generated by Flatsitter enhances each component differently. The visceral hum experienced at the start, morphs into electronic ambient music upon entering Mitchell’s brightly lit “white room.” This aural disparity is due partly to the wooden floor and walls of Collins’s installation, which absorb sound, while Mitchell’s concrete space acts like a giant reverb machine. The building’s acoustical idiosyncrasies put to effective use—one guideline met squarely.

Moving from Collins’s space into the Mitchell’s is like being transported from an impenetrable primitive culture to an indecipherable advanced civilization. Photographic lights positioned around the room might be intended to suggest “cinematic space,” but it’s also creates the effect of a cavern-like archeological display. While Collins’ room is a single unified environment, Mitchell offers discrete elements in a quasi gallery setting. In the middle of the room a large shiny amoeba-shaped copper surface adheres to the concrete floor. In its center an upright log stands next to an architectural fragment and a pile of ambiguous fiber. The curious arrangement echoes the obscure purposefulness of Collins’s work. Spotlights beam down on the gleaming surface, creating a mottled golden reflection on the ceiling, again echoing a glowing effect above Collins’s cylindrical tower.

The most compelling aspect of Mitchell’s installation takes the form of several large photo-reproductions of landscape paintings on canvas; each selectively obscured by coarsely applied gold leaf. This gilding follows natural contours in the paintings—a mountain range or line of foliage. It’s reminiscent of gilding used on Christian icons, Hindu idols, and other objects of veneration. These landscapes are as alluring as they are mildly disquieting. They hint at Gaia worship or neo-druid mysticism, if such worshipers used cheesy landscape reproductions. A spotlighted pile of crinkled gold leaf on the floor suggests unfinished work, as if someone stepped away and never returned.

One wall component, made of eight florescent lights arranged in a spoke-like pattern, flashes circularly in rapid sequence. The comically excessive mass of wires, plugs, and devices used to produce the simple effect sits below the piece like the punch line in a joke. The sci-fi absurdity of this seems superfluous to the studied stillness of the rest of the installation.

Given the blind collaboration of LAST EXIT, the individual components could have been jarringly incompatible. That’s not the case. The three separate elements resonate with each other, evoking a myriad of fascinating associations. Viewers caught up in this immersive wonderland might feel like they are in a movie. A movie in which they can only guess at the plot.

The exhibition runs through July 10, but may be extended. Open during business hours daily from 10am to 4pm Monday through Friday. Best to make an appointment with the artists at: David Mitchell [davmit@gmail.com], or Max Collins [makscollins@gmail.com].