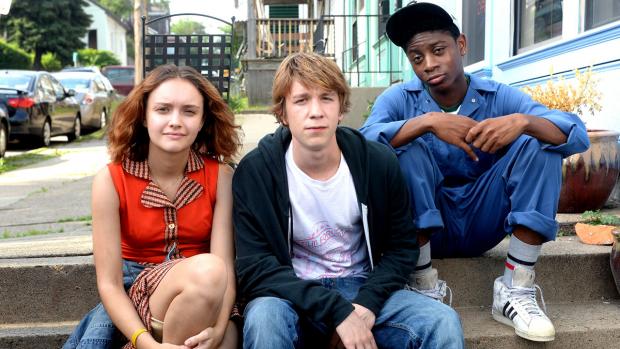 Earlier this year, the New York Times had a front-page feature about the testamentary wishes—“end-of-life plans”—of dying adolescents. Some of it was painfully sad, although it was obviously intended to offer hope and guidance. Alfonso Gomez-Rejon’s Me and Earl and the Dying Girl tries to work some of that feeling into its serio-comic coming-of-age narrative.

Adapted by Jesse Andrews from his own young adult novel, Earl may be most appreciated by people rather older than the ostensible target market. YA fiction has been read by increasing numbers of adults, in recent years, but the movie has a special potential appeal to older audiences.

“Me” is Greg (a surprisingly resourceful and intermittently successful Thomas Mann), a clever, self-consciously dorky 17-year-old outlier in his Pittsburgh high school. Greg is essentially friendless except for Earl (RJ Cyler), a poor African-American kid from a stereotypically pathological family. (For an urban school there seems to be a paucity of other blacks.) For years, he and Greg have been making brief, shrewdly funny movie parodies with joke titles like 2:45 pm Cowboy. By now, there are 42 of them.

Greg’s own family is cartoonish and dysfunctional, albeit middle class, and it’s his mother who adamantly nags him into hanging with Rachel (Olivia Cooke), a classmate he scarcely knows who has just been diagnosed with leukemia. From this conspicuously contrived conceit—not the movie’s only one—we follow Greg’s difficult journey toward sobering maturity and self-knowledge.

Rachel herself seems to be little more than another device, and Earl is an increasingly annoying instrument of the filmmakers’ attitudes: a hip-hop jivester speaking in a deliberately artificial black patois, who is all but discarded by the movie’s end.

But there’s a more glaring discrepancy than those. The boys’ cinephilia will very likely be of little consequence to youthful movie goers, who are more likely to react to the film’s smart-ass serio-comic depiction of Greg’s teenage angst and anguish, and his eventual, melodramatically satisfying, coming-to-terms with himself. There is no large young-American film culture to draw on. Some of their parents and grandparents may get Greg and Earl’s filmic japes.

This is in contrast with the strange movie madness of the Angulo brothers in Crystal Moselle’s documentary The Wolfpack (which Earl will be displacing at the one local cinema showing it). Their remarkable transcribing and restaging of movies in their apartment in New York’s East Village was an almost desperate response to a cloistered, grotesque upbringing, but it actually happened. The movie has its defects, but the boys are fascinating. A few writers have objected to Moselle’s alleged exploitation of these kids, but, in some cases, they’ve missed the cruder, supremely artificial manipulation in Earl.