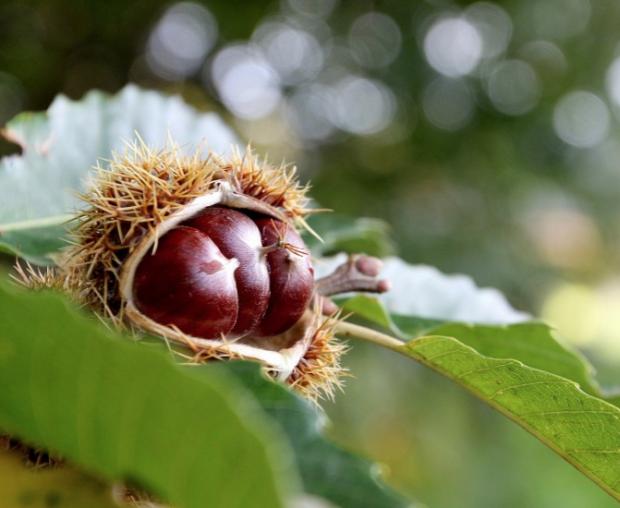 Today we are pleased to publish Anne Peterman’s piece critical of Erie County’s plan to introduce genitically modified American Chestnut in Chestnut Ridge Park. It might seem like a good idea on the surface, but a little deeper look uncovers some real dangers to moving ahead with an idea, mission, and product that is essentially corporate greenwash.  Erie County is hardly alone in being used by less than honorable interests. Research and activism conducted at the SUNY ESF (College of Environmental Science and Forestry) is funded by corporate agents that are deeply involved in profitable deforestation initiatives across the globe. They seek to develop and sell more economically efficient products including trees that burn hotter, grow faster, produce more palm oil, and create economic benefit that are profitable to investors. Economic efficiency always ignores environmental and cultural costs.  The environment is often an after thought to these dangerous to nature industrial farm products. People that depend on forests and nature for clean air, water, shelter, food, and life sustenance are shoved to the side, and sometimes murdered by the corporate political animals that think that they have the privilige to exploit.  The American Chestnut and ESF have been used to conduct reserarch and raise money as a front  for the kind of industrial forest products that come from the labratory. Untested engineering is set loose on unsupsecting clients such as an environmental policy-strong Erie County that would love to find ways to bring back real chestnut trees to Chestnut Ridge Park. We applaud that sentiment.  Instead we get substantially dangerous invasive tree products that allow corporations to continue to profit from the exploitation of natural areas.   Peterman’s research and activism regarding GMOs and GM Chestnuts is deeeply respected by scientists and communities around that globe that are concerned that these genetically modified agricultural products, including forest trees, can create more harm than benefit. Given the profound implications to natural communities and ecosystems, can’t we consider the precautionary principle and at least pump the brakes on this not so good Erie County project?

Self-replicating, unregulated GMOs in our forests, what could go wrong?

This spring Erie County Executive Mark Poloncarz took part in an Arbor Day activity that planted 50 American chestnut trees in the park as part of a reintroduction campaign to bring the park’s namesake trees back.

Unfortunately, a future phase of the plan involves introducing risky GMO American chestnut trees to the park in the misguided belief that this is the only way to restore the species and make it resistant to the blight that killed the trees in the early 1900s.

GMO Proponents ignore the potential dangers of planting these unnatural American chestnut trees in the forest. They also overlook the fact that, outside of labs and test plots, GMO trees are not legal.  In fact, the only countries in the world genetically engineered forest trees are legal for use are China and Brazil.

If approved by the government, the GMO American chestnut tree would be the first ever self-replicating GMO to be released directly into the wild for the purpose of contaminating as many wild relatives as possible.  It would be one giant uncontrolled experiment and set a dangerous precedent for the future our forests and natural environment.

It is clear that some researchers are eager and confident in the outcome of their experiment, but the interests of science alone cannot be enough to take an irreversible action that involves the world’s first release of a self-replicating genetically modified organism, the long-term risks of which are completely unknown.  History has shown us that just because science can do something does not always mean it should.  Our scientific and technological choices must be informed by broader ethical, health and environmental considerations.

And while these researchers insist that their genetically engineered American chestnuts are the only way to go, there are numerous initiatives working to restore the American chestnut naturally through traditional breeding techniques.  But GMO chestnut proponents complain that this process is too slow, while downplaying the risks and unknowns of these trees.

We know from GMO crops that genetic engineering comes with unintended problems. Widespread use of herbicide resistant GMO corn and soy, for example, led to the evolution of herbicide-resistant super weeds—and hence to the use of even more toxic herbicides.

But in the case of the GMO American chestnut, we are not talking about an annual plant in a field, we are talking about a tree that can live 250 years and spread pollen and seeds for miles.

Forest ecologists will tell you how very little we know about forest ecosystems.  The complex interactions between trees, soil microorganisms, wildlife, songbirds, and insects are barely understood.  There is no way to know what the risks will be of planting GMO trees in forests. If something goes wrong in 20, 30 or 50 years, the impacts will be irreversible.

If we truly want to protect our forests, we should be combatting climate change and stopping the global trade in raw logs, woodchips, and live trees that is importing the diseases, insects and invasive species that are wreaking havoc. Adding unnatural and risky genetically engineered trees and their unpredictable impacts will only worsen the problem.

Tell County Executive Mark Poloncarz to reject dangerous genetically engineered American chestnut trees and to support only the efforts to restore them naturally.

Anne Petermann, an East Aurora native, is the Executive Director of Global Justice Ecology Project, with international headquarters in Buffalo.  She has been studying the social and ecological impacts of GE trees since 2000.  She presented “Risks, Concerns, and Potential Problems Regarding the Use of Biotechnology to Address Forest Health” to the National Academy of Sciences on March 27th.  Washington, DC’s The Hill, ran an Op-Ed on GE trees co-authored by Petermann on March 28th.