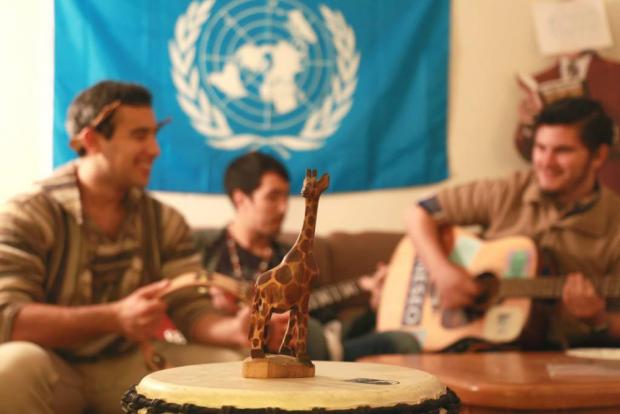 Ponder the Giraffe is in good company. They’ve officially joined Toad the Wet Sprocket in the “weirdest band names I’ve come across” category. But that certainly doesn’t mean they don’t have talent. The band (vocalist and guitarist Gabe Birkby, guitarist Matt Rapoza, drummer Aaron Murphy, keyboard plater Justin Fischer, and bassist Andy Hogan) combine an eclectic mix of jam rock and alternative to create a sound that’s garnered them a fair amount of attention. At SUNY Geneseo, where the band met, they recently opened for alt-pop titans New Politics; they will be playing the Buffalove Music Festival this year, too. To get to know this eclectic group a bit better, I spoke with singer Birkby and drummer Murphy to find out more about the band’s recent success and how they’ve subverted many of the stereotypes of college bands.

Tell me about how you guys got started.
Birkby: About a year and half ago, I signed up for a Geneseo battle of the bands, and after I signed up I realized I didn’t have a band. So I contacted Aaron to play drums for me. We ended up losing, but over time we recruited more members. Ssince March of last year we started getting more serious, and now we’re really trying to show what we can do and get out as much as we can.

Being so eclectic, how did you all come to a consensus on what types of music you wanted to play and write?
Birkby: I think what we usually play would be indie with a mix of jazz and funk and that comes from me listening to a lot of indie music.
Murphy: And for me it’s a lot of rock and funk. I’m really into a lot of jam music, so these styles all come together.
Birkby: We tend to put a lot of genres into each song, and we mix it up a bit. It’s fun to experiment with other styles of music, and we don’t like being confined. We don’t just want melody and guitars. We’ll throw in a rap or a drum solo.

When you write your songs, where do you usually draw from? Is it collaborative effort?
Birkby: Initially, I’ll be sitting around thinking of a topic. As someone who is constantly studying so many different things, it’s fun to explore other people’s perspectives and what they go through. I tend to write in the mindset of someone else and dive into emotions we haven’t previously felt. Then I bring the outline of the song and lyrics to the band.
Murphy: The drums follow naturally from whatever he writes. I have my own musical tastes, which involve a lot of build ups and jam sorts of things. So I’ll try to incorporate those into the songs around what Gabe makes.
Birkby: Murph tends to add a lot of the emotion to the song. We’re not just lyrically driven. We try to use the music as a way to play with feelings as well.

So where did the name of your band come from?
Murphy: Way back in the long, long ago when we had just started, I thought this would be just a fun little thing, so we can’t have a serious name. So I just sat in my dorm room and wrote a bunch of names down on a piece of paper. They were all silly names, and I showed the list to Gabe, and he picked it out. Out of all the stupid names, he picked that one, but it’s become a lot of fun and pretty good for marketing.

You guys have sort of transcended the clichés of the “college rock band” in the way that you’re breaking out and pushing beyond that closed off environment. Do you think the ultimate goal here is to move beyond that story and that label?
Birkby: From the beginning, this thing wasn’t supposed to be anything special. We didn’t plan on opening or playing any big shows. But as time went on, people kept asking us to play more shows and we kept going because people liked it. The goal isn’t necessarily to transcend the college band stereotype. We know music is something we can do forever even after college is over. We’ve all become close friends and we want to keep going in any way we can.

Was being in Geneseo, a college that really isn’t surrounded by much, difficult for you guys in terms of finding places to play and spread your music?
Murphy: We did have the issue of not having many places to play, so we created a venue in my basement. We built our fanbase off of that. We’d have 80 to 110 people coming to watch us there.
Birkby: It’s nice to give a spot for other bands to play. It was really hard to find shows, and we realized other bands were in the same boat, so it was great giving other local bands a place to play a few shows a year. We met friends that way and it really became a community and less of a following.

How has playing more in Buffalo changed how you view the local scene?
Birkby: Buffalo has a great scene. We’re trying to play as much as we can there because it’s so receptive. I didn’t realize the amount of talent in Buffalo. Now that we’re older, the talent level at every local show in Buffalo is amazing. I would love to see local bands play over and over again. Every band we’ve seen and played with from Buffalo is just incredible.

What sort of material do you guys have out or in the works? Where can people find your stuff?
Birkby: We just recorded an album and released in December called Remember the Bridge. We’re on all the major platforms: iTunes, Spotify, and Facebook under Ponder the Giraffe. We haven’t told anyone yet, but we’re planning on releasing an EP as well in the middle of July.