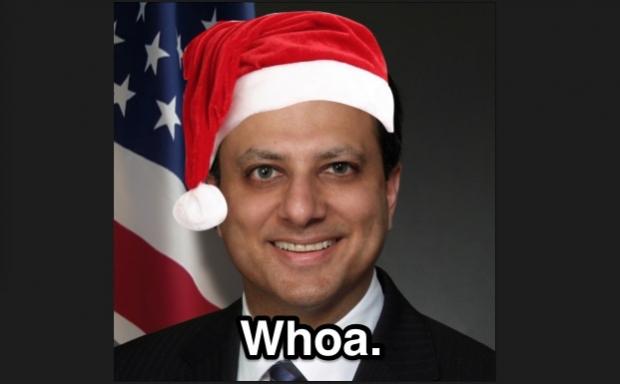 Bombshells fell on Buffalo’s legal and political circles Wednesday when it was announced that Supreme Court Justice Michalek would plead guilty to charges relating to bribery and filing a false instrument, and that former Erie County Democratic Chairman and Pedro Espada patronage hire G. Steven Pigeon would appear in court on similar allegations on Thursday.

On May 28, 2015, state and federal law enforcement executed search warrants at the homes of Pigeon, former Buffalo Deputy Mayor Steve Casey, and Chris Grant, former chief of staff to Congressman Chris Collins. The raids stemmed from allegations of campaign finance illegalities arising out of a failed political committee run by Assembly candidate Kristy Mazurek in 2013 called the “WNY Progressive Caucus”, or as I call it, “AwfulPAC”. (Click this link to see the complete compendium of Preetsmas/AwfulPAC posts since 2015).

Since then, Western New Yorkers have wondered what was going on with this investigation, especially as the statute of limitations for campaign misdemeanors came and went. We now have part of the answer: The first domino to fall will be Judge Michalek, a well-regarded straight-shooter of a judge. A huge cache of emails from Pigeon’s computers revealed a scheme to engage in bribery:

State prosecutors will contend that an “understanding” existed between Michalek and Pigeon that the judge would engage in “official misconduct which advanced Pigeon’s interests,” according to the source who is familiar with the felony charges. The charges will accuse Michalek of “accepting and agreeing to accept benefits from Pigeon,” the source said.

In exchange for Pigeon’s help in finding jobs for two of Michalek’s relatives, and Pigeon’s help recommending Michalek for a seat on the Appellate Division of the 4th Department in Rochester, Michalek would make rulings on cases that were favorable to Pigeon’s interests, and went so far as to have Pigeon appointed referee on an Amherst foreclosure, which would have netted Pigeon a few hundred dollars.

Here, it should be noted that it was Pigeon’s once supposedly tight relationship with Governor Cuomo that likely would have prompted Judge Michalek to reach out for help getting an “App Div” appointment in 2012, and Pigeon responded, “I will start talking u up.”

According to one of the seized emails, Michalek assigned Pigeon to work on a foreclosure, with more emails between Pigeon and Michalek illustrating the judge’s official misconduct and the benefits that Pigeon provided to the judge and his family members, the source said.

In March 2012, Michalek emailed Pigeon regarding a lawsuit pending before him, providing Pigeon with nonpublic details concerning a motion filed by a nonparty to the litigation seeking a protective order from a subpoena served by one of the parties, the source said.

In a written decision issued about two weeks later, Michalek denied the motion for a protective order, just as Pigeon had requested. Michalek then sent Pigeon an email with a copy of the decision attached and thanked Pigeon for “his efforts” on behalf of his first relative looking for a job, the source said.

Pigeon responded by email a short time later with an offer of additional assistance to the relative.

Small potatoes stuff—this is the political equivalent of nabbing Al Capone on tax evasion. But it’s a start, and we’ll wait and see what’s in the Pigeon indictment, and whether Schneiderman might have more cases still left to unpack.

While at first blush a lot of this seems like just a guy helping his buddy’s relative get a job or two, there are concrete allegations that there was a series of quids pro quo between Michalek and Pigeon—at least enough to get them both disbarred. This is the tip of a massive iceberg—think of all the petty corruption you suspect or know about that never gets reported, much less prosecuted. Michalek has pled guilty, so it’s safe to say that Michalek agreed to manipulate the outcome of cases before him in exchange for the use of whatever influence Steve Pigeon might have had at the time regarding a handful of jobs and patronage appointments.

A sitting Supreme Court Justice just pled guilty to two felonies related to bribery, and will be sentenced in late September. He is cooperating with law enforcement, and Steve Pigeon is next to appear in court regarding charges arising out of the same set of facts—possibly more.

Query why then-DA Frank Sedita didn’t pursue the complaints made by his deputy Mark Sacha around 2009, or the AwfulPAC allegations in 2013.

It looks like Preetsmas is finally here, and that there’s quite obviously much more to come. And it’s been a long time coming.

Here, courtesy of WGRZ, is the text of the indictment against Michalek.