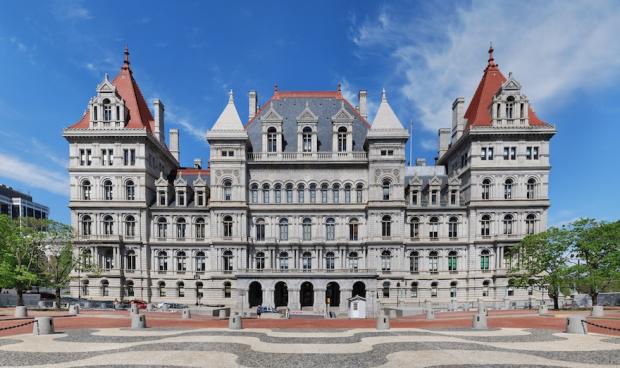 In his essay “Against a State Constitutional Convention,” Jeremy Toth asserts that the election of Donald Trump has singlehandedly caused him to go from being a fervent proponent of a state constitutional convention in New York to being a fervent convention opponent. His logic: “Anything is possible” (with the implication being of course, that “anything,” in the sense of a convention, would mean something bad).

Indeed Toth substitutes this aphorism for any hard data or analysis as to:

In place of any such evidence, Toth argues in essence that because “anything is possible,” we need the limit the possibilities.

Running through his polemic against holding a constitutional convention is a tension between what appears to us to be contradictory visions. On the one hand, it scares the hell out of Toth that “populist” delegates might be elected and might dominate the convention. On the other hand, the empirical data he presents about the 1967 convention demonstrates the extent to which established, prominent, and well respected politicians—liberal, conservative, Republican moderates, Democratic progressives—dominated both delegate selection and the convention itself. Toth believes the same thing will happen in 2019: Andrew Cuomo and the Democrats will line up delegates; Republicans will line up delegates. It will be, according to him, the same old same old. However, in startling fashion he reverses course and spends the rest of the essay trying to convince his readers that it could (will) be a convention dominated by populists who will foist dangerous proposals on the rest of the convention and then bamboozle voters (who have the final approval over anything the convention does) into accepting them.

To support his contention about unchecked populism, Toth selected a handful of bills introduced this session to amend the state constitution as evidence of what a populist convention might produce. Far from a representative sample of the hundreds of amendments introduced, the proposals Toth selected are not the stuff of populist rantings. One proposal, a unicameral legislature, has had the support of a number of prominent respected political scientists and reform groups. Populist? Hardly. Another example is term limits, which Mr. Toth admits is not outside the mainstream of political reform in America and which have been adopted by a number of states, including California, which has not succumbed to right wing populism. Another proposal Toth cites is that we not pay legislators. The less said about that one the better. He also mentions proposals that would require extraordinary majorities to raise taxes. This is far from a novel concept. New York currently requires a supermajority when local legislatures wish to raise property taxes. That measure was supported by “populist” Governor Andrew Cuomo, and our “populist” state legislature. That puts the state in line with California, which also requires voter approval for raising local taxes. Sixteen states require a supermajority vote for certain taxes to be raised. You may or may not approve of such measures, but they are hardly out of the mainstream.

Relying on pejorative labeling with little analysis, Toth equates what he calls “populist measures” with “bad” measure without justifying that equation. What his argument comes down to is that a convention might adopt measures he does not like. He draws examples from the many proposals introduced by legislators that never go anywhere; never come to a vote; and are made with the full knowledge that they are going nowhere—they are symbolic gestures made largely to appease constituents. These “go nowhere” proposals are even less likely to go anywhere at the convention for the additional reason that delegates do not face reelection as delegates so there will be little or no electoral pressure on those who are not inclined to support such measure. If these are meant to be examples and they are the best he can come up with, we can tuck the worry beads away.

Concerning Toth’s argument that the political process for the selection of delegates will make a convention an unnecessary duplication of the legislature, our constitutional history does support this claim. Significant differences exist between the state legislature and a constitutional convention that make a convention more likely to propose structural changes. For a legislatively initiated constitutional amendment to make it to voters, the amendment must be adopted by each of the houses of two consecutively elected legislatures—legislatures that have other functions to perform such as passing a budget and adopting necessary legislation for the state to function. A convention is a unicameral body; its proposals have to pass once through a single body that is constituted for the sole purpose of proposing constitutional reform. Delegates to a constitutional convention also have much greater independence than legislative members. There are no re-election campaigns for delegates and no seniority system for the appointment to critical positions. Convention delegates also are a mix of district and statewide, allowing for a statewide view to balance purely local interests. Convention officers do not wield nearly the same political power as legislative leaders. Also, delegates are drawn from different branches of government, bringing different perspectives that may be absent from a legislative process that it as devoid of hearings and substantive committee reports as the New York legislature.

Perhaps because of these differences, past conventions have been of great value in creating our constitutional tradition. They have been far from the do nothing boondoggles that Toth presages. The 1821, 1846, 1894, and 1938 conventions, all of whose work was approved in whole or in large part by the voters, had their share of sitting or former legislators and judges. Yet nearly every right and most of the important constitutional reforms that we now look at with pride were the products of these conventions.

The very constitutional protections opponents use to scare people from approving a constitutional convention happened because we held conventions! In the absence of conventions, would these cherished rights and policies be in the constitution? We wouldn’t bet on it. Since the state’s founding, conventions have had a much stronger record of creating and enhancing rights than the state legislature. Although we cannot predict what a convention will or won’t do, we have no evidence whatsoever to believe that a convention in 2019 would undo this strong tradition.

The 1967 convention, often assailed as a “failure” because its work was rejected by voters, produced a remarkably forward looking document. Rejected in large part because of the removal of a provision banning the use of public money for religious education, the constitution produced by that convention included several reforms that the state could benefit from today:

Far from a do-nothing waste of taxpayer money.

Most striking is that the largest number of delegates (46) were notable for their public service and not for their party leadership positions or elected offices. They were individuals who had distinguished themselves as citizens.

If there are delegates at future conventions who have distinguished themselves in public life and earned the esteem of the voters who chose them as delegates, should we fault the process for producing such results? A small number of legislators is a byproduct of having a cross-section of people bringing different levels of experience and coming from different political parties, and different parts of the state. Would Toth trade these individuals, all of whom are familiar with our constitutional system of local, state, and national governments and committed to our constitutional values such as the rule of law, an independent judiciary, a viable legislature, and the rights and policies New Yorkers cherish, for a convention filled with delegates who had no political experience or familiarity with decision-making in democratically organized forums?

Such delegates are the best defense against Toth’s other charge: that a convention will open Pandora’s Box and threaten our constitutional values.

Toth also argues that if the delegates do manage to overcome the inertia plaguing the legislative system, the measures they take will likely threaten constitutional provisions that many hold dear, such as protections for the Adirondack and Catskill forest preserves, the obligation of the state to provide aid and care for its needy, and the protection for collective bargaining and labor rights.

It is hard to square Toth’s worry about runaway populism with public opinion in the country and in New York. Two nationwide polls conducted in the spring of 2017 showed that a majority of Americans envision a larger role for government. In a survey conducted by NBC, 57 percent percent said that government should do more to solve problems and meet the needs of Americans, the highest percentage since the question was first posed in 1995 and a significant increase over the 2015 figure of 50 percent. A Pew Research Foundation poll conducted in April 2017 found that more Americans now prefer a bigger government with more services to a smaller one with fewer services. Compared to 2013, there was an 18 percent increase in support for more spending for assistance to the needy; a 13 percent increase for protection of the environment, and a 15 percent increase for Medicare.

Such results suggest that the time is right and that voters are unlikely to support any cutback in the positive role for the state in promoting social welfare, conservation, and education, among others. New Yorkers voted for Hilary Clinton over Trump by 23 percent. Democrats serve as governor, comptroller and attorney general. In fact, no Republican has won a statewide election since 2002. The state has a Democratic controlled assembly and Democratic enrollment advantages in 49 of the 63 state senate districts. Where are these reactionary/populist delegates that scare Toth so much going to come from? Where are the voters going to come from to approve any reactionary proposals? Under any measure, the populist shift that rocked the country in the last election has not made its way to New York, and will likely have little impact on a convention.

Not once in Toth’s essay does he even hint that a convention might provide necessary changes to a state that by almost all accounts is in need of major changes. Toth is wrong when he says the state constitution is a “progressive” document. It was progressive in 1938, not so much today. Rather than deal with the possible, let’s deal with some actualities:

While Toth is correct when he notes that the legislature has the right to initiate constitutional amendments, it has either been unwilling or unable to meaningfully address these issues during the last 40 years, and we have no confidence that it will meaningfully address them in the next 20 years. Likewise we believe a commission whose proposals are subject to legislative review will be similarly ineffective. The citizens of New York deserve a much better state constitution and the only way they will have a chance to get that better state constitution is with a convention.

It was hope, not fear, that propelled New York to its status as the Empire State. The state’s motto is not “Let sleeping dogs lie.” It is “Excelsior!” Ever upward.