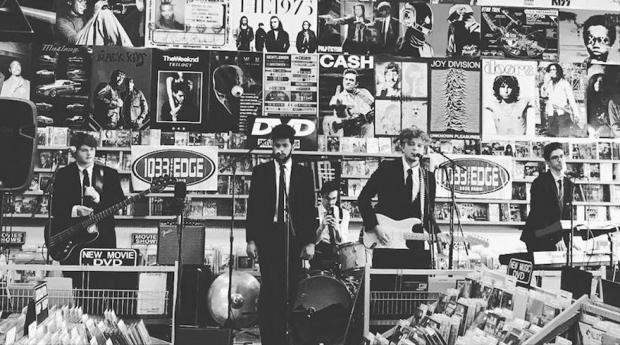 Buffalo-based garage rock band Mom Said No, is releasing their debut album Time, this summer. The project, still in the final stretch of its creation, is being recorded at the popular GCR studio downtown. With help from GCR owner and Goo Goo Dolls bassist Robbie Takac, the alternative rock quintet has a promising future ahead. Takac is working with the group on their single, “The Campaign Song” and rumored to be assisting with a couple more tracks on the upcoming effort.

“We’ve spent time with [Robby Takac] in the studio and he has been a huge help in the process of making this single and possible other songs a smash hit,” says vocalist Tim Jackson.

Along with Jackson, the band is made up of guitarist Elliott Hunt, bassist Ben MacFayden, and brothers Chris Lillis, and Mike Lillis—keyboard player and drummer respectively. With their new line up, the band has developed quite the presense in the local rock scene. While they often play rock-centered music, the group doesn’t subscribe to any specific genre yet. Their high-energy pop edge has allowed the college-aged band to cultivate some impressive collaborations. Their 2016 EP, Motivation offered stylings from saxophonist Mars Williams of Psychadelic Furs and violinist Mary Ramsey from 10,000 Maniacs. It also featured Anthony Corrone of Arkells who delivered his effortless piano work on a few tracks.

Taking inspirations from the Beach Boys to Green Day, Mom Said No oftens finds themselves having different visions for their sound. Lead vocalist Elliott Hunt explains how the band integrates each member’s style.

“Everybody has their own idea of how we should sound so when we write a song, we bring it to the group…everybody brings their influence and [we] mix it up.” To them, this means no one member really takes full ownership of any one song. It’s pure collaboration.

Their undoubtedly catchy tunes often show off the band’s well-polished songwriting, though it hasn’t come without some challenges. The band has dealt with a couple roster changes in the past year, but their album seems to have come at a perfect time, as their line up of members has stablized. And now, they seem more confident than ever. Bassist Ben MacFayden explains the new adjustment of the band.

“The band that we have now is about a month old…we lost our lead guitarist recently and so we had to reconfigure ourselves.”

With every member attending different schools, it has been a feat for the band to have a stable schedule. Though they have suffered multiple changes and functioned originally as a six piece band, Mom Said No has quickly adapted to the sound and pursuits they desire.

“It’s our voice…It’s really cool how it all connects,” says MacFayden. “What we were always looking for was a band where if you took one away, it wouldn’t be the same.”

While producing their next album, Mom Said No have been making the rounds in the local concert scene. They’ll be performing at a new festival coming to Buffalo this summer, Cobblestone Live. They are also on the serial compilation album We Killed Mckinley, which was released this past April and also features bands like Stress Dolls, dreambeaches, and the Mallwalkers.

The first edition of the We Killed Mckinley album series was released in the early 1980s and featured Buffalo’s rock bands including the then teenage Goo Goo Dolls.

With their album release date still unannounced, Mom Said No assures that there is a clear direction for the record. Both Chris Lillis and MacFayden chime in on the sound of Time.

“There will be elements from the EP…but it’s gonna be definitely more of like an alternative rock vibe,” says Lillis.

“Also I think this album is gonna sound very much so different from the EP—a complete 180,” says MacFayden.

Hunt even goes further into the message of the album, which he says is to bring people together. The young, multi-racial band plays off the themes of black and white and often includes that in their dress code.

“If we have something to say, we say it… years ago, this band would never be able to be a thing.”

Planning to tour the east coast this fall in support of their album, the group looks forward to the future. While the appeal of this young rock outfit might be the pop melodies and genre-bending music, Mom Said No only wants to achieve one goal, and that is to break barriers.