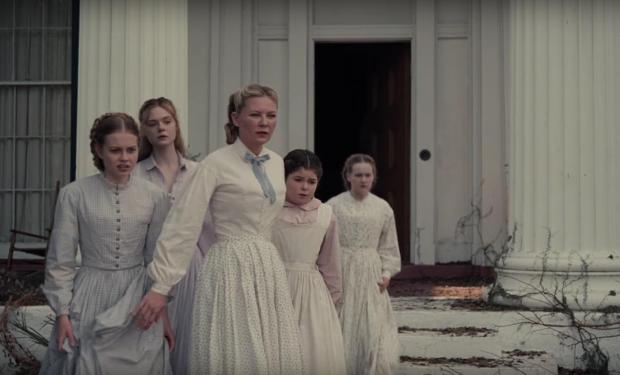 In 1971, two of director Don Siegel’s films were released, both of them with Clint Eastwood leading the casts: Dirty Harry, the law-and-order celebration of a rogue copy (“Go on, make my day”) andThe Beguiled, a Civil War-era drama. This second film was something of an anomaly in Siegel’s career, known as he was for tense contemporary crime thrillers and a very few Westerns. Beguiled was a strange movie irrespective of who made it, creepy and violent, with an ominous, hothouse psychosexual tenor that leads to a violent denouement.

Sofia Coppola’s new version, based like the older one on a 1966 novel by Thomas Cullinan, is both similar to, and a departure from Siegel’s. It’s also a personal reaction against much of it, one being lauded as an implicitly feminist redo.

It does follow the same basic narrative structure. In 1864 Virginia, as the Civil War increasingly goes against the South, wounded Union army corporal, John McBurney (Colin Farrell), is discovered by a young student from the nearby Farnsworth Seminary for Young Ladies. Taken in by the headmistress, Martha Farnsworth (Nicole Kidman), he is tended to and nursed back to health by her and the few other females left at the school after most of the students, teachers and all the slaves have fled as the war has come closer. Beside Farnsworth, there is Edwina (Kirsten Dunst) the sole teacher, and five girls, none of whom have homes to which they could return. The school is an isolated and threatened island of refinement and tradition amid a savage national upheaval, housed on Farnsworth’s family plantation.

McBurney is a penniless Irish immigrant who enlisted for a $300 bounty paid by a wealthy man to escape conscription. He’s a crafty survivalist, with no desire to return to his regiment. Farnsworth is also a survivor, a woman of sometimes intimidating, authoritative competence. She has kept her little brood protected in dire straits. This portrayal, ably achieved by Kidman, is in striking contrast to Geraldine Page’s performance in the 1971 movie as a tightly wound, resentful woman who eventually explodes in response to McBurney’s wiles and manipulation. All the females in Siegel’s film are portrayed as dangerously and stereotypically unstable.

Here, McBurney is still an opportunist but Farnsworth and the others are unthreatening. It is this male interloper who’s the threat, a seducer and disruptor of this fragile little female enclave. It’s somewhat paradoxically signified by the much-photographed massive Ionic columns of the plantation’s mansion.

There’s been a lot of comment about Coppola’s application of a “feminine gaze” to the story, a more enlightened and balanced reconceptualization of the older film’s masculine assumptions and fears about females. She certainly has diminished the brutal elements and given her film a calmer, more sympathetic cast, but the result doesn’t really work. Siegel’s was basically a gothic horror movie. Coppola’s quieter, more measured pacing doesn’t develop much tension, or even dramatic interest for much of Beguiled’s length.

From her debut 18 years ago with The Virgin Suicides, Coppola has concentrated on establishing and extending mood in her movies. In this one, the sunlight filtering through the mossy limbs of tall live oaks, the dim, candlelit interiors, the stately cadences of Monteverdi’s “Magnificat” on the soundtrack leave the movie awash in atmospherics, even as too little seems to be transpiring. The sharp climactic rise near the end is a little late and unpersuasive. Beguiled is only 94 minutes long, but it feels stretched.

And for a movie that’s widely being described as benefiting from a feminine point-of-view, its portrayal of the women’s situation is rather odd. All of them save Farnsworth react to McBurney’s presence with avid interest or fluttery flirtatiousness. And even Farnsworth begins to soften under his attentiveness. The four elder girls, and especially Edwina, are presented, however unintentionally, as acting as if what they most need or want is a good you-know-what.

This Beguiled is more curious than involving.