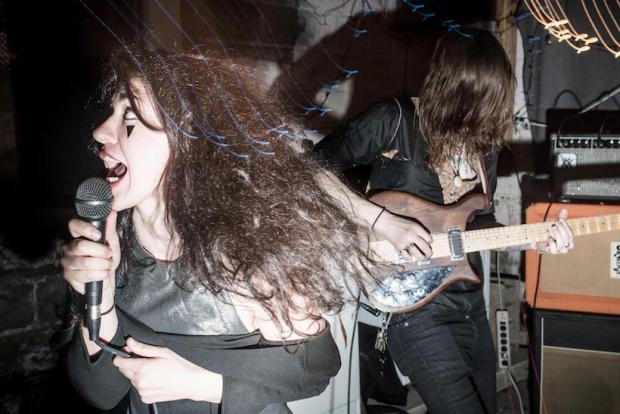 Immigration lawyer by day, punk singer by night, Irene Rekhviashvili is the frontwoman of the noise punk band Alpha Hopper. With a new record on the horizon and a show coming up this Thursday, June 28 at Electric Avenue with the Brooklyn-based cowpunk band Bambara, we caught up with Rekhviashvili to talk about her sci-fi inspired lyrics, her intense day job, and, of course, Bruce Springsteen.

Do you like your job? Is it intense?
I love my day job. I am an immigration lawyer for a non profit, Journey’s End. It is intense because of the clients that we serve. It’s a lot of people in need, a lot of people with different cultural backgrounds who have gone through a lot in their lives seeking the rights to live in the US. It’s very intense but very interesting and very satisfying.

How long have you been doing this?
Past four years.

Has it become more intense in light of the policies of our current president?
Super intense because of the current president. It’s like every week we feel like some law has changed and we don’t know how it’s going to play out but we have our suspicions. There’s a lot of uncertainty within our client population but also amongst the attorneys as well because of the constant changes. It’s hard to know what’s going to happen next. You’re always expecting something bad to happen.

Yeah, is that an unfair assessment?
No, I think that’s a great description; one that I like to hear, so that’s great.

You obviously have a job that can become political in some ways. Do you like to let your politics come through in the music of Alpha Hopper?
Not really. I try to keep my job and the rest of my life kind of separate because if you take it home with you it has a very big ability to affect you. It’s also almost not my story to tell. I don’t want to use other people’s lives for punk. It’s weird because traditionally it’s maybe not the case; a lot of people in punk get political with their vocals but I feel in my position I’m kind of privileged, so I feel weird using that as a way to advance my punk music. It’s a weird feeling and it’s not like I have anything against anyone that does, because everyone does things for their own reasons, which is fine, but that’s just how I personally feel about it.

What kind of themes do you like to hit on the most lyrically?
[She laughs] The things that I like to think about are mostly science fiction I guess. Science fiction mixed in with philosophy. That’s where I get my material from, but the way it comes out is more like fun and simple.

What would you say is the general philosophy of the band?
What we like to do is—we don’t want norms to stop us from creating something completely different. We want to challenge ourselves and we want to create something that’s our own. I’m sure that’s every punk band, but we have fun just trying things that traditionally wouldn’t be tried by a punk band. I say punk band but we’re kind of like weird for punk—which is a weird thing to say.

Punk can be kind of an umbrella term.
Right, it can be an umbrella term. We try to be innovative for ourselves and push our own limits to create something that hasn’t been done before—challenge expectations.

As far as the music goes, it’s pretty raw and noisy live and your vocals are loud and aggressive. Is there anything special you do to prepare for a live performance?
I do try to do warm up exercises. I sing in my car a lot. The best thing that I can do is just practice consistently before a show; like regular practice with the band. One thing I hate the most is having any period of time when I don’t sing, even in practice, and then trying to do a live set. That’s my worst nightmare because I know I’m going to suffer.

Tell me a little bit about the origin of the band.
Here’s my end of it, because I think everyone has a different origin: I was watching this documentary with John, Toohill, the guitar player of Alpha Hopper, about Rowland S. Howard. I got super inspired by it. I was like “oh my god, John, why don’t we start a band?” I was in one band at that point but I was feeling inspired. After I made my opinion on the matter clear, he asked Ryan [McMullen, guitar] and Doug [Scheider, drums] to join the band.

What was the documentary called?
I don’t remember what it was called but it was about Rowland S. Howard. He used to be in a band called The Birthday Party with Nick Cave. He was the guitar player. The documentary contained a lot of his music, which I hadn’t heard before that time and I was feeling really good about it. I was like “wow this is incredible, what a discovery! Let’s start a band.”

You guys are working on a new record. Tell me a little about that.
We recorded our record with Eric Bifaro at Deep Space 8 and we are just working on the final mastered versions of all the songs. We’re really close to having the music complete, then after that comes everything else; cover art etc.

If you could describe the new record in a few words, how would you describe it.
Oooo, ahhh. It feels different and more challenging than our last. It feels frantic and exciting and loud and it’s fast and it’s fun.

Oh, yeah, of course.
Of course. But the reason that I really like the title is because it feels like “last chance power drive” is as frantic as Alpha Hopper sounds to me. When I’m performing it just feels like “catch up, catch up, go go go.” I felt that the words themselves were really on point. That’s why I liked it. Ryan came up with it and I don’t know why he remembered those lyrics or why he equated them with us, but it works.

Since then you’ve released a B-side titled “Denver Airport.” What’s the story behind “Denver Airport?”
It’s just a really weird avant-garde song that didn’t make it onto the last album. Of course it’s named after the infamous Denver Airport, which has like a million conspiracy theories about it. I think everyone knows that there’s a crazy looking horse statue in front of it that like killed the person that made it.

So the song is almost as weird as the airport itself.
I’m going to say yes. Nobody knows how the song came about and there’s a lot of conspiracies around it.

Is there anything you want to say about your show coming up?
Everyone should go to the show because I think it’s going to be really fun. Bambara is an amazing band. They sound great, they look great, their performances are amazing, their music is so good. So I wouldn’t miss it.

Correction: a previous version of this article misattributed Ryan McMullen as drummer and Doug Schider as bassist.