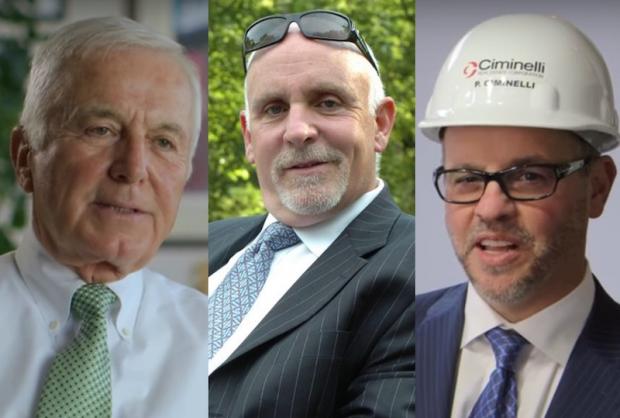 The Trump administration’s cruelty toward immigrants and refugees trying to cross the border has provoked massive outcry in recent weeks. In addition to growing anger toward public officials who are implementing Trump’s policies, many have begun to focus on identifying the private sector actors—including private prison operators, logistical service contractors, and big banks—directly profiting from immigrant incarceration.

Several Buffalo real estate developers profit from leases to the federal agencies carrying out Trump’s agenda. Buffalo’s detention profiteers enjoy prominence in local society, sitting on the boards of colleges and cultural institutions, and are also major political donors who pour money into the campaign coffers of local elected officials—Republican and Democrat alike—who have so far resisted calls to make Buffalo a sanctuary city or to endorse the abolition or reform of Immigration and Customs Enforcement (ICE).

New York Governor Andrew Cuomo has taken at least $50,500 from local landlords to immigration enforcers, Lieutenant Governor Kathy Hochul has taken $24,000, and Buffalo Mayor Byron Brown has taken $35,300. Congressmen Brian Higgins and Chris Collins have received $33,250 and $22,975, respectively, and Senator Chuck Schumer has received $14,900. The incarceration profiteers have also donated at least $21,500 to the Buffalo Niagara Partnership’s political action committee and $13,250 to the PAC of the closely related 43×79 Group.

This article examines the local elites cashing rent checks from ICE and Customs and Border Protection (CBP), the two primary government agencies responsible for enforcing immigration law and executing Trump’s vicious border policies. Beyond the policies of family separation and indefinite detention, both ICE and CBP have been accused of a swath of human rights violations going back long before the 2016 election. By profiting from leases with these agencies, these Buffalo developers—and the politicians whose campaigns they fund—are tacitly endorsing the brutal persecution of immigrants and refugees being carried out at their hands.

Uniland Development, headquartered in Amherst and owned by the powerful Montante family, appears to be the biggest local detention and deportation profiteer, earning more than $2.5 million per year from leases to ICE and CBP. The ICE Enforcement and Removal office in Uniland’s publicly subsidized Delaware North Building at 250 Delaware Avenue in downtown Buffalo brings in $1,949,414 per year in rent, according to the Government Services Administration.

Another Uniland-owned building at 300 Airborne Parkway in Cheektowaga houses the Customs and Border Protection Buffalo Field Office, earning $562,756 per year in rent.

Developer Carl Montante founded Uniland with his brother Thomas in 1974 and remains its president and managing director. Three of Montante’s children—Laura Zaepfel, Carl Montante Jr., and Michael Montante—are vice presidents at the company. According to a state tax appeal determination from 2009, Carl Montante owned 82.99 percent of Uniland and his children own “various minority percentages” of the company.

The Montante family and other Uniland executives sit on several prominent boards in the region. Michael Montante sits on the board of directors of the Buffalo Niagara Partnership, an influential corporate lobbying group, and Carl Montante Sr. has had a board position there in the past. According to their corporate bios, Carl Montante Jr. and Laura Zaepfel are on BNP’s development advisory council and Zaepfel sits on its diversity and inclusion council.

Profiting from leases to the agencies responsible for the immiseration of immigrants to the United States seems to conflict with their Catholic faith. The church has unequivocally denounced the cruel treatment of immigrants at the United States border, and Pope Francis called on the United States to treat immigrants in “a way which is always humane, just and fraternal” during the latter years of the Obama administration. Canisius College and High School were founded by Jesuits, the Catholic order well known for its commitment to social justice. In late 2016, Canisius College President John Hurley signed on to a letter urging US politicians to maintain the DACA program, stressing Catholic colleges and universities history of “welcoming those on society’s margins, especially immigrants and underprivileged populations.”

The second biggest local deportation profiteer is Williamsville-based developer Acquest Development, owned by William Huntress. According to its website, Acquest leases properties to more than a dozen federal agencies, including CBP. Two border patrol stations owned by Acquest will bring in more than $2.2 million in rent for the company in 2018. The Erie, Pennsylvania station has a lease worth $855,701 and the Grand Forks, North Dakota station lease is worth $1,408,593.

Until late 2017, Acquest owned a third border patrol station in Grand Island, New York, which it sold to the Cleveland asset management firm Boyd Watterson for $11.4 million in December 2017. CBP’s lease on that building is worth $1.1 million per year, according to the Government Services Administration.

According to a Buffalo News story from late 2017, Huntress has “butted heads with neighborhood residents and public officials and gained a reputation for hard-ball tactics” over the years. Since 2008, Huntress has faced criminal and civil suits from the federal government related to two separate cases where he attempted to develop wetlands. In the first case, Acquest pled guilty to criminal charges and paid a $250,000 fine for illegally filling in wetlands and cutting down trees as part of a deal that dropped criminal charges against Huntress himself. A separate civil lawsuit brought by the Environmental Protection Agency against Huntress for alleged Clean Air Act violations in his attempted development of a different wetland was dismissed in 2017.

Huntress is also a high-stakes gambler who regularly enters the annual World Series of Poker. He recently lost in the first day of the $25,000 Pot-Limit Omaha 8-Handed High Roller event in this year’s tournament.

Huntress is a major local political donor to candidates on both sides of the aisle as well. The politician who has received the most in campaign contributions from Huntress that is still in office is Congressman Brian Higgins, who received $7,850 from Huntress from 2004 through 2013. Buffalo Mayor Byron Brown is another significant recipient of Huntress’s political donations, having received $6,000 from 2012 through 2017. Huntress is also the top donor to Grand Island Town Supervisor Nate McMurray, who is challenging Republican Chris Collins for his congressional seat, giving $5,400, the maximum allowed by law. Huntress has given $2,000 to Collins in the past, and was also a major donor to former Republican Congressmen Chris Lee and Tom Reynolds who both retired amid scandal. Michael Huntress, the son of William Huntress and a vice president at Acquest Development, donated $1,000 to Donald Trump in 2016.

Ciminelli Real Estate Corporation also profits from leases to Customs and Border Patrol. The CBP Buffalo Station at 600 Colvin Woods Parkway in Tonawanda brings in $582,752 per year in rent, according to the Government Services Administration.