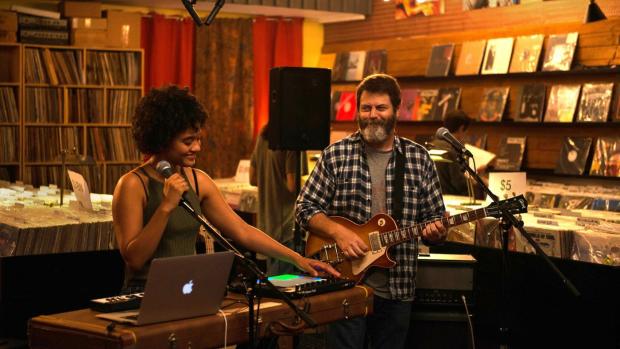 I don’t know about you, but it seems like everyone I know is suffering from anxiety overload these days. It doesn’t matter which side of the political spectrum you’re on, though it’s all but impossible to be in the middle on any issue: Everything has been turned into a zero sum game between the good guys (Us) and the bad guys (Them). And popular entertainment reflects this, with movie theaters dominated by comic book movies about superheroes and supervillains.

That there is a yearning to get a way from this is shown by the success of the current Mr. Rogers documentary, Won’t You Be My Neighbor. I haven’t had a chance to see it yet, but if you’re of a mood for something on the peaceable side, let me recommend Hearts Beat Loud, a pleasant example of a genre I like to refer to as Nice People Get Their Shit Together.

Nick Offerman brings his bearish charm to a leading role as Frank Fisher, a former musician who now runs a used record store in Brooklyn’s Red Hook neighborhood. The steady income it provided was necessary after the birth of his daughter Sam (Kiersey Clemons), especially after her mom died in an accident. Now that Sam is going off to college in California, Frank is planning to close the store and do something else, though he has no idea what.

Even though she is determined to become a doctor, Sam inherited the family musical gene, and jamming with dad has long been a weekly tradition. One such session gives birth to a song that Frank posts on Spotify. To his amazement, it starts to get some traction. Wouldn’t be nice, he thinks, if he and his daughter could form a band and play together? Maybe that college thing can wait for a year?

That’s about it for plot in Hearts Beat Loud, a substantial portion of which is given over to the lightweight but catchy tunes the pair compose. This portrait of the relationship between a father and daughter preparing to separate is touching, but the film can’t bring itself to focus anywhere for too long: We also have subplots with Toni Collette as Frank’s ambiguously friendly landlady, Blythe Danner as his mother, whose facilities are starting to fail (though glamorously so), Ted Danson as a friendly bartender (whoah, there’s a stretch), and Sasha Lane as the new love that Sam has to leave behind.

Hearts Beat Loud was directed by Brett Haley, who co-wrote it with Marc Basch. The same team was responsible for I’ll See You In My Dreams, starring Blythe Danner as a widow who gets a new lease on life at the age of 70, and The Hero, staring Sam Elliott as a dying actor reflecting on his life. I loved Dreams, didn’t see Hero but heard good things. Clearly Haley, who is in his early 30s and blessed with indie cred (all three of these films, made in the last four years, were Sundance favorites), has a penchant for what are often disparagingly referred to as “feel-good” movies. It would be easy to pick apart the flaws in Hearts Beat Loud, beginning with the awful title. Yes, I know that composing, arranging and recording a hit song in one evening is highly unlikely. But the movie made me feel good enough that I could suspend my disbelief. It’s not a great film, but it’s pretty irresistible.