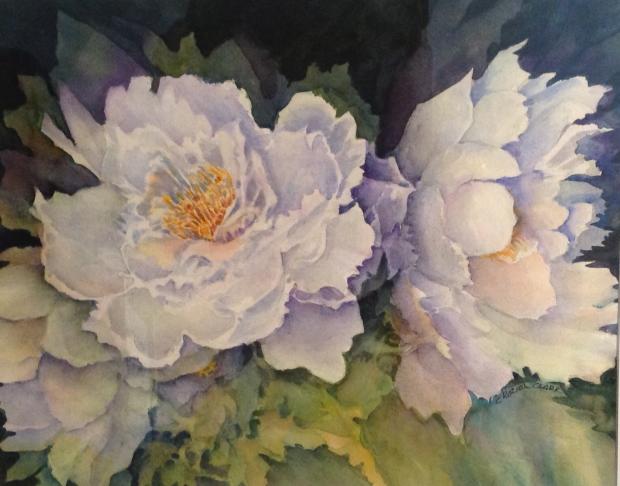 At Western New York Artists Group Gallery, an exhibition and spirited discussion of art and gardening

Art and gardening experts discussed topics ranging from engagement with immigrant and refugee communities to use of the herbicide Roundup in a panel session in conjunction with the current botanical art exhibit at Artists Group Gallery.

The works on show in the gallery—by a score or so of accomplished area artists in a wide variety of media—all depict flowers.

The nominal discussion topic was: “How Art and Gardening Bring Cultures and Generations Together.” Panelists included: Sally Cunningham, master gardener and author of the volume Great Garden Companions; Julie McIndoo, watercolor artist and also master gardener; and Robert Scalise, acting deputy director of the UB Art Galleries. Scalise confessed from the outset that he is “not a gardener,” but was ready to talk about art. David Swarts, president and CEO of the Buffalo and Erie County Botanical Gardens, was moderator.

Lots of lively back and forth on the nominal and tangential topics. Cunningham talked about a Cooperative Extension program she was involved in some time ago in conjunction with the Massachusetts Avenue Project then in its infancy, wherein African-American youngsters interviewed West Side refugee people about the food they ate and the gardens they grew it in in their former lands. Cunningham said it was probably the first encounter many of the African-American kids had with refugee populations, or the refugee populations with African-American kids, and both sides seemed to greatly enjoy and learn from the encounter. She said one result of the program was that the Massachusetts Avenue Project added hibiscus—to make hibiscus tea—to its garden plants roster.

McIndoo talked about her experience once as a schoolteacher starting up a gifted and talented program with prominent gardening elements, such as seem to be widespread in elementary schoolrooms these days. Kids planting plants in the classroom that they then can take home and re-plant in their back or front yards. And how a gardening curriculum in schools promotes awareness about plants as food that becomes reflected in family grocery store choices.

She also talked about farmer’s markets as a means of promoting interaction among newcomer and established communities. “There’s no language barrier when walking into a farmer’s market,” she said.

Scalise talked about how art institutions, instead of thinking about ways to get lower socioeconomics groups—such as immigrant and refugee communities, but also the black community—into art galleries to look at works on the walls, are thinking about ways to bring innovative art projects into poorer communities. He talked about a recent UB Art Galleries venture in which a two-artist collaborative from Los Angeles whose projects focus on fruit—apples, oranges, grapefruit, bananas—including providing fruit to undernourished or otherwise disadvantaged communities—undertook to plant fruit trees in the Fruit Belt section of Buffalo. Scalise said the one-weekend project was less successful than hoped for due to torrential rains that weekend. (The Los Angeles art collaborative is called “Fallen Fruit.” The two artists are David Burns and Austin Young.)

Cunningham noted another benefit of gardening for kids “who these days are on computers all day long,” and not getting outside and experiencing the natural environment. “Kids need to get outdoors and involved in the outdoors,” she said, “to develop human traits of compassion and empathy and respect for other living things—including other people.”

On a question from the audience about what plants grow best in the region’s “native clayey soil,” Cunningham answered succinctly, “Native plants,” and plugged the exhibition currently at Meibohm Fine Arts gallery in East Aurora called Art of Native Plants, continuing through July 29.

Another question from the audience was about Roundup. Nobody had much good to say for the product. Cunningham offered several alternative solutions for dealing with unwanted plants, including, as a last resort, “bend over and weed.”

Among works on show at Artists Group Gallery: Vicki Schneider’s delicate, lovely soda lime glass sculptures reminiscent of the nonpareil glasswork of George and Paul Marchand for museum dioramas such as at the Buffalo Museum of Science; varieties of impressionist watercolors by Pat Fortunato, Alice Seeley, and Julie McIndoo; embroidery stitchery fabric work by Marie Hassett; a screen print purple iris with an art nouveau feel by Dorothy Markert; and photographs by Don Scheller, Eileen Graetz, and Norman Horning. (Hornung’s employing a novel technique he calls “Scan-o-Gram.” Photos that mimic paintings. Not in the old Photo-pictorialst mode. Nor more recent paintings that mimic photos Photorealist mode. Something in-between. A third alternative.)