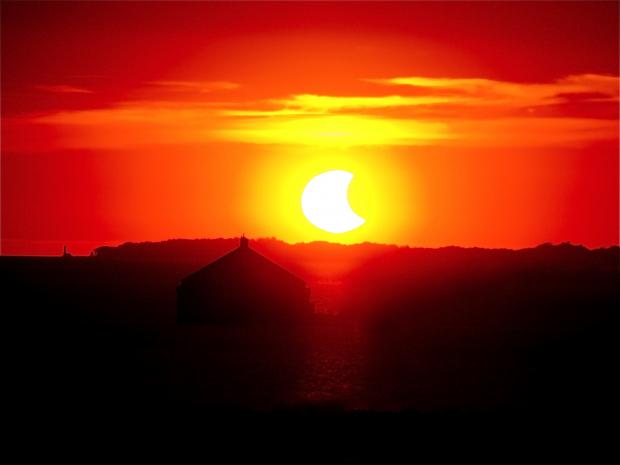 Dancing till the end of time as new reports reveal the end game of the Sixth Extinction. Photo of a solar eclipse over Fort Erie from Buffalo's Inner Harbor. (photo by Jay Burney)
by
Jay Burney
/ Jun. 26, 2015 12am EST

She told Sutter, and the new report leaves no doubt, that climate change has already reached the point where lots of people are going to die as a result. This includes 12,000 per year in “major cities” in the US by the year 2100.

The human health impacts and explicit references to loss of life are  somewhat of a public coming out in terms of our government’s promoting awareness of this kind of cost benefit analysis. It is a real challenge by scientists to find ways to engage the public and the leaders that they elect about the dire emergency that we are facing. The report also points out the staggering monetary costs under a variety of increasingly shrinking real world climate change scenarios. Acknowledgement of these costs is not so new. It is probable that actual costs will exceed trillions of dollars in the coming decades. Maybe that is just too abstract for most Americans to digest. How about this-lets get down to the bottom line. Climate change will kill you.

The new EPA report- “Climate Change in the United States: Benefits of Global Actions” is just the latest in a series of reports by the government on climate change that began with the launch of the initial White House/USGCRP National Climate Assessment on the Great Lakes Region at an event at the Statler in downtown Buffalo in 2000.

That report, which continues to be the foundation of how science characterizes climate change and the impacts in our region, articulated that more heat waves, more intense precipitation events, and cumulative negative effects on human health; ecosystems including freshwater resources; agriculture; and overall economic productivity will create significant impacts in how well our future works. It helped to open the floodgates to understanding the economic impacts. Things have not become better.

More Than Energy — More About Consumption Most if not all climate strategies including assets in this new EPA report, directly address the economic costs  and consequences of greenhouse gas emmissions and of our continued reliance on fossil fuels. Under almost all circumstances the locus of the energy discussions focus on transforming energy production to more renewable resources. This is certainly important, but this often complicated and divisive industrial production and distribution discussion frequently misses the point. Our economic system is about limitless growth and it is fueled by consumption and consumption is eating the earth and all of its systems.  While finding strategies to release less carbon into the atmosphere is essential, it is also critical to face directly the failings of our economic system. Climate change is the greatest failure of our economic system. Social injustice is both a product of our economic system and increasingly of climate change. If you are not at least thinking about that, you are failing to recognize the forest for the trees.

Biodiversity and Ecosystem Collapse As readers of GreenWatch know, I focus on the impacts of biodiversity and ecosystems, -until recently a topic obscured by energy discussions. Increasinlgly these ecological impacts are being recognized as fundamentally significant factors driving climate change and not just being driven by climate change.  Guy McPherson, Professor Emeritus of Biological Sciences at the University of Arizona describes part of the complexity of these relationships as “feedback loops” where actions build upon actions in an ever expanding cycle of ecological collapse. Read more of Professor McPherson’s work at his blog Nature Bats Last.

The new EPA report helps to bring to the forefront some of those biocentric concerns that we need to wave a sustainability flag around. From the report:

Ecosystems are held together by the interactions and connections among their components. Climate is a central connection in all ecosystems. Consequently, changes in climate will have far-reaching effects throughout Earth’s ecosystems. Climate change can affect ecosystems and species in a variety of ways; for example, it can lead to changes in the timing of seasonal life-cycle events, such as migrations; habitat shifts; food chain disruptions; increases in pathogens, parasites, and diseases; and elevated risk of extinction for many species. Climate change directly affects ecosystems and species, but it also interacts with other human stressors on the environment. Although some stressors cause only modest impacts by themselves, the cumulative impact of climate and other changes can lead to dramatic ecological impacts. For example, coastal wetlands already in decline due to increasing development will face increased pressure…”

Simply put, the loss of biodiversity will continue drive ecosystem collapse and climate change that will do great harm to all life on earth including human life.

The good news is that the report says that we can still ameliorate the consequences of climate change. Not a really good chance, but a chance.  The report  lays out a series of strategies that we need to initiate or continue to build upon if we want to have any effect on the consequences. We will explore some of these strategies in coming columns. The bad news is that we are progressing rapidly into deeper and deeper trouble and we remain unable to save ourselves.

The new EPA report is an important step in helping us to personalize the coming and ongoing consequences of climate change. To bad it isn’t getting wider coverage or being pushed as the Climate Emergency that it is.  We clearly have one and it would be wise to manage our intellectual and civic resources to address and plan for our rapidly approaching future. Failing to do so is stimulating social, economic, and environmental catastrophes across parts of the US and across the globe.  The EPA report comes just on the heals of another report released this week by a collaboration of scientists based at the Stanford University Center for Conservation Biology and the Stanford Woods Institute for the Environment.

The report “Accelerated modern human–induced species losses: Entering the sixth mass extinction” was published 19 June in the journal Science Advances, a publication of the AAAS (American Association for the Advancement of Science).

It characterizes and catalogues the rapid escalation of what scientists have recognized as “The Sixth Extinction.”

You may recognize one of the principle authors Dr. Paul R. Erlich, founder of the Center for Conservation Biology at Stanford.

Erlich is one of the world’s pioneering scientists in work on population, resources, the environment, and public policy. He is a founder of the field of Coeveloution which is the understanding of how the evolution of species impact each other and the ecosystems in which they exist. His work in the area of cultural evolution and environmental ethics reach deep into how humans have changed the planet.

The new Stanford study shows that the current extinction episode made more familiar by Elizabeth Kolbert’s 2014 book “The Sixth Extinction” is escalating and is worse than previously thought.

Erlich told reporters “There are examples of species all over the world that are essentially the walking dead.” “Parrots, raptors and penguins, large mammals and small insects, including the honey bee, are now in obviously danger. The coral reefs could be gone by 2070, -a disaster that could precipitate the loss of as much as a quarter of the ocean’s species.

The report concludes that people are at fault for this “global spasm of biodiversity loss.”

From the Stanford University Press Release:

Focusing on vertebrates, the group for which the most reliable modern and fossil data exist, the researchers asked whether even the lowest estimates of the difference between background and contemporary extinction rates still justify the conclusion that people are precipitating “a global spasm of biodiversity loss.” The answer: a definitive yes.

“If it is allowed to continue, life would take many millions of years to recover, and our species itself would likely disappear early on,” said lead author Gerardo Ceballos of the Universidad Autónoma de México.

Other Conclusions The Stanford report also finds that:

-Even with extremely conservative estimates species are disappearing at about 100 times more than the background rate. The background rate is defined as what could be expected if there were not accelarators such as human development and climate change driving the ship of life on earth.

-The most dramatic human-caused impacts on the ecosystem occurred after the Industrial Revolution. For instance, the death rate for birds, mammals, amphibians and fish since 1900 has been 72 times what has historically been the normal rate between extinctions.

-Since 1800, 540 species of known animals have been wiped out, most of them vertebrates. The study found that, under normal circumstances, those animals would have lived another 800 to 10,000 years.

-Impacts on birds have been and will continue to be severe.  The Ivory-billed Woodpecker, Passenger Pigeon, Carolina Parakeet, Great Auk, and Imperial Woodpecker are amongst those relatively recently lost.

It has been well over a decade since we began to find ways to catalog and compare the evidence that humanity and indeed all life on earth is in the throws of this Sixth Mass Extinction. Scientists have been following that trail for over half a century starting at least with Rachel Carson. There have been bumps in the road, including the hysterical distractions of social engineers, warmongers, and the somnambulance of self hatred sometimes steaming from the melting pot. But the evidence is here.

We will continue to write about strategies to be more proactive in our cultural approaches to climate change. Significantly we have no regional or local comprehensive Climate Change Action Plan. And even if we did it will take a lot of arm twisting to convince anyone with any thoughts or capacity to work through this to incorporate conservation and biodiversity into what are almost exclusively economic development dominated energy plans that play to our green energy and jobs sensibilities.  We need better local leadership. Without it we remain committed to trouble. Can we find our way home? What do you think?