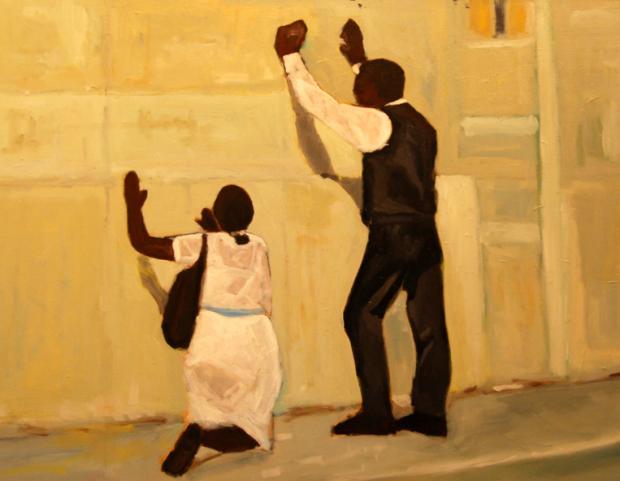 …I would like to pose a question: What is Black Art? I am black and an artist, so do I produce Black Art? Is art considered Black Art because the subject matter is urban, or ethnic, or because it has some black theme? Is it art that…depicts figures crying for freedom?

…Would my paintings of whales be Black Art because of the artist, or because whales swim in African waters? What if I painted landscapes of European countries, with only white subjects? Would you call it Black Art?

Diversity in theory and practice—in sociopolitical terms and artistic terms—in the current exhibit at Artists Group Gallery. Works by members of the Western New York Urban Arts Collective—an organization to promote the visibility and solidarity and support the professional development of artists particularly of color—though artists of all ethnicities and backgrounds are welcome to join—in a wide variety of modes and media, from sculptures of rocks and driftwood to visual art in a range from abstract to allegorical to poignant political.

Ray Robertson has the rocks and driftwood and other beach found materials sculptures. A stone and wood and metal items pillar entitled The Beach Comber, and a similar one entitled The Watcher of the Forest, with a French curves and curls bentwood crafted item among found natural materials. Also by Robertson, four energetic nature subject photos, stream rushing waters.

Betty Pitts-Foster has several abstract impressionist paintings, including two with the same basic title—Beauty from Ashes / Central Park—and numbers, 1 and 2. My first thought was Central Park, New York City, but then what was the beauty from ashes idea? And what to make of the rows of little yellow hut-like structures in the background of both works? Then I realized, not Central Park, New York City, but the Central Park Plaza, Buffalo. Finally—after decades of slow to rapid decrepitude, then merciful demise, then a decade or so more of urban wasteland abandonment, with a chain-link fence around it—showing signs of redevelopment. Into what, who knows for sure? Maybe something beautiful. (But no excuse for the temporary failure of recognition on my part. I live nearby and used to shop regularly in the Central Park Plaza when there were three large grocery stores there. Then there were two. Then one. Then none. Creating the Main and Amherst area food desert, which prevails up to the present moment.)

Phyllis I. Thompson some personal memories works in combinations of monotype, drawing, and collage techniques, and imagery ranging from wallpaper patterns to a chicken silhouette, to actual burlap-type fabric, to burlap-type fabric printwork.

Kerima Collier some bold-pattern abstract paintings with abstract conceptual or emotional event titles. Passion, an intricately multi-layered complex. Feminist, in swirls and eddies of shades of blue. And First Kiss, in a semi-lurid color spectrum around an emotional epicenter of intrepid red.

Iris M. Kirkwood six digitally created drawings in the form of playing card allegorical representations of conceptual subjects such as Spirituality and Intuition.

And Markenzy Cesar several large realist paintings, including one of a male dancer at rest, one of a female dancer in calisthenic pose and upside down, one called Le Mur, showing a black couple in grief meditational poses at the Wailing Wall in Jerusalem—or it appears at the Wailing Wall—and one called Girl with Matches, with reference to Hans Christian Anderson’s story The Match Girl.

Meanwhile, in the adjoining Art Dialogue Gallery, a show of a few dozen oil on paper paintings by Len Biszkont, called Stories Told. Which look at first glance like stories untold. But on further perusal, told all right, just that they’re extremely short stories. Often humorous, and sometimes a little strange. Like Emergence, one body seeming to step out of a former body, like a butterfly out of a cocoon. Or The Vanishing Man, portrait of an old guy, fading, right before our eyes. Or Cyril and Clyde, portrait of a man and his dog. What’s more to say? Or The Prized Pig, a man and his pig. Or Doubt, a man having second thoughts. Or The Park Bench, two old guys going nowhere. No problem.