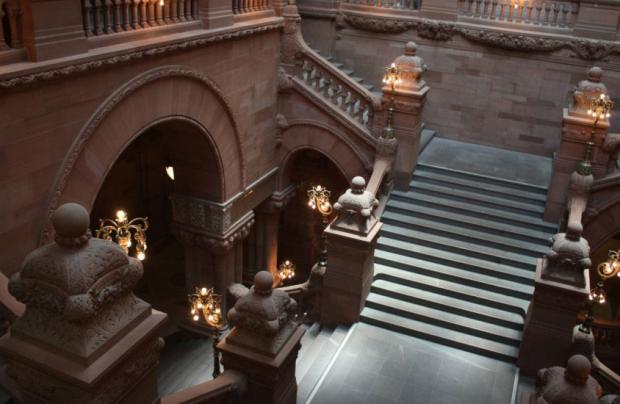 As the session winds down in Albany, Western New York lawmakers will be presenting constituents with a mixed bag of accomplishments and defeats.

In the turmoil and controversy resulting from the downfall of former Assembly Speaker Sheldon Silver and former Senate Majority Leader Dean Skelos, measures and initiatives pushed by lawmakers from Buffalo, Elma, North Tonawanda—and most of the rest of the state for that matter—were shoved to the back burner as issues important and timely for the epicenter of the state’s political universe, New York City, were placed front and center, Western New York lawmakers say.

Mayoral control of New York City schools was extended by a year while a bill pushed by Buffalo Assemblywoman Crystal Peoples-Stokes that would have given control of Buffalo’s school district to Mayor Byron Brown for two years in an effort to right the long-struggling system never even made it to the Assembly floor for a vote.

The $250 million allocation for mandate relief for private schools made it through, while the education investment tax credit, pushed by many upstate lawmakers, particularly Senate Republicans, as well as some downstate Democrats, and a $100 million pot for struggling upstate school districts promised by Gov. Andrew Cuomo both seem to have been lost in the shuffle.

Also failing to get through the Legislature was a push for reforms to the criminal justice system by Republican state Sen. Patrick Gallivan. Notably, the “Raise the Age” campaign didn’t gain traction in the GOP-controlled Senate, which had called for a more limited alternative.

State Sen. Marc Panepinto, a Buffalo Democrat and a freshman legislator, said that at times felt like he was a “spectator,” because there was so much attention being paid to New York City issues like rent regulation.

“In the last two to three weeks everything has been New York City-centric,” he said.

Peoples-Stokes, while disappointed that her mayoral intervention bill and other education-centric bills did not become law, said that many of the New York City-centric bills passed were important, even if they did not directly affect her constituents.

In particular, Peoples-Stokes said the extension of rent regulations for four years in New York City will have a significant impact on the quality of life of those who live there.

“Quite frankly, even though I don’t represent the area, I have a very high interest in it as well,” Peoples-Stokes said. “People could be left homeless, as if we don’t already have enough homeless people in this state.”

Peoples-Stokes pointed to the fight over rent regulations as the key element that held up discussion of other issues, because it was a hard sell in the Republican-controlled Senate.

“Something needed to be done with that and, unfortunately, because of the politics, it takes time to work out the details of it,” she said.

Peoples-Stokes said the Senate’s desire for the education investment tax credit bill, a measure that she would have supported in her chamber, also proved a significant drain on political and temporal resources.

“There was not enough support in the Democratic conference for that so things had to be banged out around that,” she said.

Still, a few measures seen as wins for Western New York and upstate made into the omnibus bill often referred to as the “Big Ugly” in the Capitol that some lakefront legislators are hailing as victories as the session comes to a close, including the property tax cap extension and a property tax rebate.

But while Peoples-Stokes acknowledged that the tax cap extension and rebate will likely be popular with constituents, as they will get checks in the mail as a result, she said the money could have been spent on other worthwhile initiatives or the taxes should have never been collected in the first place.

In addition, while many Western New York lawmakers were touting the tax rebate as a win, she was quick to point out that people in the surrounding suburbs of New York City, including in Long Island districts like Senate Majority Leader John Flanagan’s, will get much larger checks than most of the rest of upstate.

Gallivan, one of the Western New York delegation’s more seasoned legislators, viewed the session as productive despite the distractions.

The senator’s push to create a separate prison system for people jailed under the age of 18—currently 16- and 17-year-old inmates are housed with adults—did not make it through his chamber. Democrats had been pushing to also raise the age of criminal responsibility to 18, which would have brought New York in line with nearly every other state in the country.

Cuomo said he will issue an executive order to remove inmates under 18 from the general prison population, a move that Gallivan supports as a stopgap solution.

The governor’s executive order, while a step in the right direction, will not address the underlying issues with young offenders, something the senator said he will push to deal with again next session.

“There’s no doubt advocates, different advocacy groups, and no doubt members of the Assembly who have pushed it, will continue to push it,” he said.

While Gallivan acknowledged that this session was more turbulent than most, he felt that Western New York was able to bring home a few key deals that will help many of his constituents, particularly the extension of the property tax cap, progress on teacher evaluations and a review of Common Core requirements.

“I think those are things that our constituents in Western New York are asking for,” Gallivan said.

Panepinto expressed disappointment that many of the things on his agenda—minimum wage, paid family leave—didn’t even come up for discussion in his chamber, saying that the amount of time dedicated to dealing with leadership issues was a contributing factor.

“I think those types of things fell to the wayside in the wake of the leadership changes,” Panepinto said.

Still, he felt as though Western New York issues were not completely ignored, with the property tax cap extension and rebates being passed, though he would have liked to have seen changes to those bills as well.

Of greater concern to Panepinto is the absence of $100 million in aid for struggling schools.

Cuomo and leadership did announce a $250 million pot of money for private schools to help relieve what they have described as unfunded mandates, but the public school funding proposed by the governor last week is not included in the deal, Panepinto said.

“It’s a little disturbing to me when we’re giving away $250 million over two years to private schools for so-called unfunded mandates,” Panepinto said. “I’m a little concerned that upstate might have been left out of the mix if the governor forgot to get us that $100 million he promised us 10 days ago.”

Justin Sondel appears courtesy of a content-sharing agreement in place between The Public and City & State.