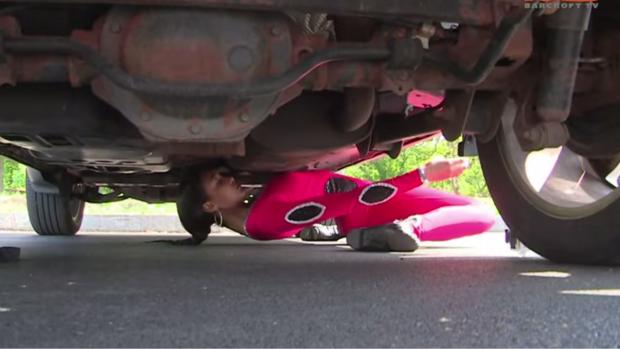 Buffalo native Shemika Charles has raised, or rather, lowered the bar as low as it can go when it comes to limbo dancing. The limbo queen achieved her most recent world record this month after folding herself up to limbo underneath a car, which is measured at about nine inches from the ground. While this height is higher than her previous record, this effort brought on different challenges. Charles claimed her first spot in the Guinness World Records book after completing the lowest limbo by a female when she appeared on “Live! With Regis and Kelly” in 2010. She stunned the crowd, swooping down to limbo eight and a half inches off the ground, which is the height of a beer bottle. The 22-year-old, who has been practicing the art of limbo since she was 14, trains at least six hours a day. At such a young age, her relentless dedication and discipline in perfecting her craft has paid off, as she has now holds two world records.

“The clearance is around nine inches but certain parts are lower than others so it took a lot of concentration and controlled breathing,” Charles told Barcroft TV. “I want to do it again.”

In addition to her ability to get low under the limbo bar, she also has other tricks up her sleeve, such as holding spinning circus plates in her hands and from her mouth or being blindfolded while holding other items, all while limboing. Charles works hard to stay in top-notch shape in order to make each performance appear effortless with her strict training regimen. To help her stay limber she also visits a chiropractor once a week to have her hips realigned.

“She really is amazing—like a freak of nature,” said Dr. John Przybylak. Though he continues to remind her if she fails to stick to her training schedule she could experience painful physical problems later in life. From the looks of it nothing will slow Charles down, especially due to her plans for the future, as she hopes to complete the world records for backwards limbo and distance traveled while limboing. Charles regularly travels around the U.S. performing at NBA halftime shows with the help of her family.