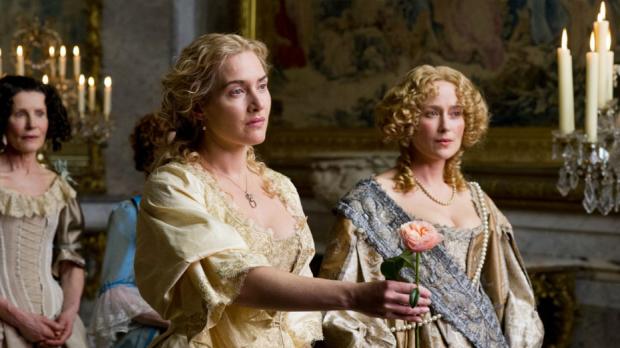 If ever there was a time to appreciate Buffalo’s independent movie theaters, midsummer is it. That may seem a strange thing to say in the time of year when Hollywood cranks up its blockbuster machinery to 11. But given the way that the big studios have sliced up the summer calendar so that only one or two films are released each week, think how awful it would be to live in a place where there were no alternatives to Ted 2 and Max.

The title notwithstanding, A Little Chaos is exactly the kind of historical costume drama that will appeal to moviegoers who would rather sit in the mall parking lot for two hours than witness the reproductive problems of a profane teddy bear.

Alan Rickman, who also directed and co-wrote the script, plays Louis XIV, the Sun King of France. His new palace at Versailles, under construction for years, is nearly ready to be occupied, and he’s eager to move his court there away from grimy Paris. Among the final touches is the gardens, which he tells his landscape architect Andre Le Notre (Matthias Schoenaerts) should be heaven on earth. Looking for someone to design a rockwork garden as part of it, Le Notre makes a choice that surprises even himself: a woman of little reputation, Sabine de Barra (Kate Winslet), whose ideas are most unconventional. Rather than stick to the usual Greek or Roman models, she wants to design something that speaks to the French soul, something with “a little chaos.”

Of course, the provincial Sabine also introduces a measure of chaos into court life, which is orderly to a fault. These scenes, which ought to be the centerpiece of the film, unfortunately never quite gel, paling next to a scene-stealing performance by Stanley Tucci as Louis’s flamboyant brother, the Duke of Orleans.

If the film overall never quite works up a full head of steam, it still has enough to recommend it for viewing on a lazy summer’s day. There’s a lovely scene in which Sabine and Louis meet in his garden. Because he’s dressed down, she mistakes him for the royal gardener and speaks to him as an equal, which he enjoys and encourages even after she realizes who he really is. It makes you wish the two had more scenes together, or even that Rickman alone appeared more in his own film. And a charming dance sequence in the complete gardens ends the film on a high note. It opens Friday at the Amherst Theater.

If you’ve given up on Al Pacino in recent years, no one could blame you: too many big paycheck movies (though whatever he got paid to be in Adam Sandler’s Jack and Jill can’t have been enough), too many scene-chewing parts that exploit his abilities to no good end (the recent Danny Collins). His best recent films have barely made it into theaters, which is why you should give him one more chance with Manglehorn.

Pacino plays the title role, a locksmith who has secluded himself from the world.  If you’re thinking “locked away,” that’s just the kind of symbolism that the movie is awash in. We follow him through his days, running his business from a van and writing letters to someone he describes as the only woman he ever loved. (It wasn’t his wife, who divorced him because of the way he shut her out.)

It’s an episodic story in which some segments work better than others. The director is David Gordon Green, wearing his sensitive indie director hat (All the Real Girls, George Washington) rather than his crass comedy cap (Pineapple Express, Your Highness, The Sitter). He tries hard, maybe too hard, to couch his star’s performance, but the film is best when we just watch Pacino as a man consumed by old regrets. And if his scenes with Holly Hunter, as an age-appropriate bank teller with whom he has an uncomfortable date, don’t much push the central story along, you can hardly hold it against the movie for indulging them. Opens Friday at the North Park.

On the surface, Escobar: Paradise Lost sounds like it might be similar to The Last King of Scotland, in which we saw a larger-than-life historical figure (Ida Amin, in an Oscar-winning performance by Forest Whitaker) from the perspective of a fictional underling. Here it’s the Colombian drug lord Pablo Escobar, who at his peak was one of the wealthiest men in the world, worth billions of dollars. That he’s played by Benicio del Toro seems a perfect match of performer to character, a domineering but eccentric self-made man who dabbled in politics as a youth and was loved by the people in his hometown for the largesse he displayed.

But despite the fact that his name is shoehorned into the title, Escobar is not at the center of this movie, which as far as I can tell is completely fictional. The star is the rather less commanding Josh Hutcherson (from The Hunger Games films) as Nick, a Canadian surfer who falls in love with Escobar’s niece and is welcomed into the family. On the verge of going to prison as part of a deal with the Colombian government, Escobar plans to hide his fortune in a cave, and enlists Nick as part of the gang that will accomplish this.

That Nick will come away from this mission, in which he is expected to murder the peasant who has found the location, as the only person besides Escobar who will know where the treasure is, immediately clues the audience into something that Nick fails to realize. The last half of the film is a protracted chase in which Nick tries to get out of Colombia alive, and it’s sturdy B-movie stuff. If only we had a more believable hero, and weren’t feeling so disappointed at how little of the villain we get. Guess we’ll have to wait for Oliver Stone’s long-delayed movie about Escobar for that. Opens Friday at the Amherst Theater.

Victor Levin was previously a producer and occasional writer for Mad Men, Mad About You, and Dream On, three television shows that have one linking characteristic: a nostalgic, fantastical view of Manhattan, drawn more from movies than any reality of the recent past. He makes his solo debut as the writer-director of the romance 5 to 7, a film which looks like it was beamed in from another planet with only superficial similarities to the one where we live.

Chronicling the affair between an aspiring young writer (Anton Yelchin, who can be pleasant in supporting roles but is no one’s idea of a romantic lead) and a married Frenchwoman nearly a decade older than him (Bérénice Marlohe), Levin eschews reality without ever putting tongue in cheek or in any acknowledging the preposterousness of the situation. It plays like something that Billy Wilder might have made in the early 1960s, though at least then it would have had some tart dialogue to cut through the suffocating fluff.

Audiences who have a liking for this kind of thing may be more forgiving than I, and I won’t waste your time picking it apart bit by bit. But any fondness you might have for it is all but guaranteed to evaporate at the end, when after reaching its preordained conclusion it spends a full 20 minutes wallowing in unnecessary mawkishness. (One petty complaint: How can a movie that is so obsessed with differences between the French and Americans, in which the hero spends his time watching early Jean-Luc Godard films to get a clue about his new amour, be so clueless as to give itself a title so similar to the nouvelle vague classic Cleo from 5 to 7, which it in no way resembles?) It opens Friday at the North Park.