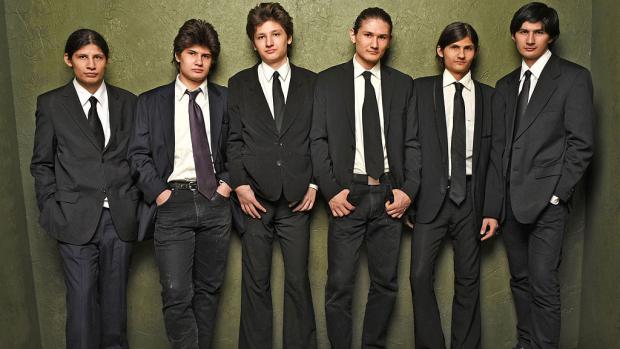 Binx, the narrator of Walker Percy’s 1961 novel The Moviegoer, resorts to watching motion pictures to relieve the oppressive, vulgar “everydayness” of middle-class American life. Binx is trying to at least periodically escape from his life.

The five Angulo brothers, the strikingly unusual, movie-infatuated, and very appealing subjects of Crystal Moselle’s engrossing, often disturbing documentary The Wolfpack, haven’t been using movies as a temporary deliverance from capitalist anomie. For years, they’ve been relying on them to create and sustain lives that were long spent in conditions of severe, gothic restriction.

The boys, along with their hapless mother Susanne, were mostly confined to their four-bedroom apartment in Manhattan’s East Village. Their Peruvian-born father Oscar kept the front door locked, and the keys to himself. The boys, now ranging in age from 16 to 23, were home-schooled by their mother and confined most of the time in these close quarters.

Oddly, Oscar—who comes off here as a delusional, mildly paranoid authoritarian—seems not only to have allowed but to have encouraged his sons to watch movies. Eventually, there were about 5,000 in the apartment. These the kids used as inspirations and guides in creating scenes from and whole copies of such favorites as The Dark Knight and Reservoir Dogs. These amusing and impressive recreative exercises, excerpts of which Moselle includes, were often based on meticulous transcriptions of dialogue. The remarkably faithful but imaginatively contrived restagings are replete with properties and costumes expertly produced from such adapted materials as cereal-box cardboard and yoga mats.

The movie engrossment and the elaborate dramatic efforts seem to have served as much more than an extreme-hobby diversion. They were an important, perhaps crucial means to investigate and attempt to process the world to which they were largely denied access, a way to compensate for social, intellectual and sensory deprivation. As one of the youths—I confess I sometimes had trouble distinguishing them—says, “It makes me feel like I’m living, sort of, cause it’s sort of magical.” It’s also clear that these activities nurtured the strong, protective bonding the brothers achieved.

The Wolfpack had its origins in Moselle’s chance observation and meeting with the conspicuously different-looking boys on a city street, and her curiosity about why she’d never seen them in her neighborhood before. How they came to be there is a dramatically involving part of their story, along with the consequences of their long-sequestered existence.

What may finally be the most notable aspect of this story, one Moselle gradually reveals, is the brothers’ extraordinary poise, intelligence and resilience, their apparent abilities to adapt to a world they had primarily experienced on a TV monitor and looking out an apartment window.

All this Moselle artfully documents, but here and there her inexperience is evinced. (This is her first feature.) On a minor level, there is, for example, a meaningless montage of shots near the end. More significantly, she skimps on important information. And she may have been naïve in too neatly tying things up in a predominantly optimistic, even roseate conclusion. There are a few darker notes evident. (In fairness, interviews with some of the kids also stress their resolve and adaptability.)

This movie constitutes something that’s often presented in cliche-encrusted terms: a testament to both the frequent oddness of humans and, perhaps, their capacity for change, generosity, and imaginative creation.