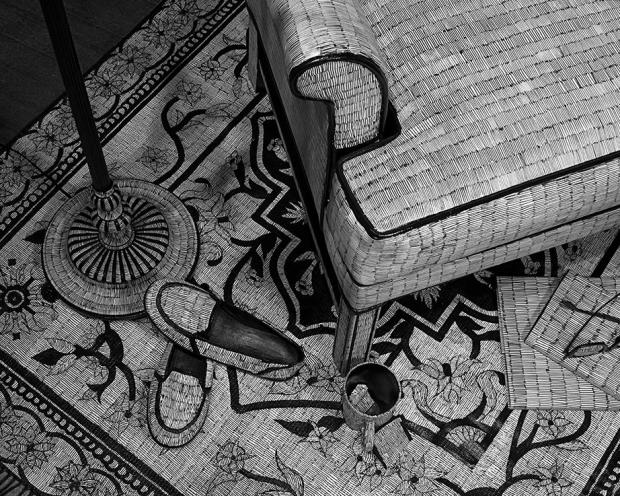 The exhibit consists of a whole house interior. A kind of stage set kitchen with sink and table and microwave oven, parlor with overstuffed easy chair and fireplace, and bedroom with bed and dresser. And most notably, everything in the exact same black-and-white hatch pattern motif. Table, chairs, sink, dishes, walls, doors, bed, rugs, quilt, even food, some apples in a dish, a bunch of grapes. All in the same black-and-white pattern, occasionally offset by some all-black contrast element or item, border beading on the overstuffed chair, quilt pattern segments, rug pattern segments, an all-black picture in an all-black frame. Simultaneously exotic and monotonous.

Like the distaff existence envisioned in the setting. Symbolized by the range of furnishings and accessories, from drudgery disesteem work items—the kitchen sink and adjacent ironing board—to moderate-esteem items—fabric work, the bed quilt, a handwork carpet—to symbolically specifically sexual, the bed. Unmade, as it happens. Rumpled. On the dresser are some enigmatic items that could have sexual significance. One of them for sure. A set of four carpentered wooden letters, f, u, c, and k. Both common senses of the word they spell out applicable in the installation context.

In a brief artist’s statement, Muntges cites Simone de Beauvoir, her book The Second Sex, as inspirational, and describes the installation as “a home I built that reflects the confidence and confusion of what it means to be a female.”

The recapitulation of the modernist art project inheres first and foremost in the tension between two and three dimensions. The stage set installation is literally three-dimensional, but the hatch pattern decorative motif acts precisely as camouflage, visually reducing three dimensions to two. (The principle of camouflage not coincidentally was discovered just prior to World War I, precisely when Picasso and Braque were inventing Cubism, the key modern art strategy, the main objective and effect of which was to problematize two and three dimensions.) But also in the occurrence of some modern art reference iconic items. Most prominently a skull, but also a plate of apples, evoking Cezanne, the beginnings of the modernist project. And the all-black painting, evoking Ad Reinhardt, whose black paintings were an effectual end of the modernist project. He called them “the last paintings” possible.

And simultaneously comical absurd and deadly serious. Comical absurd in the bizarre decorative scheme that perhaps not even the most imperious decorator would attempt to foist on his most gullible client. But deadly serious about a complex of issues with regard to personal freedom—including the freedom to be an artist—versus traditional feminine role domestic slavery. Signaled by various death symbols among the furnishings. The skull. The Ad Reinhardt all-black painting. An all-black doily on the overstuffed chair. (Like the bed quilt, more traditional women’s artwork than painting or sculpture, but moderate-esteem work, typically anonymous.)

In The Second Sex, de Beauvoir writes about the different significations of house/home for women, for men, and for artists. “The home’s champions are often women,” she writes, “since it is their task to assure the happiness of the familial group…their role is to be ‘mistress of the house.’” Whereas, “for men, [a house] is simply a place to live.” Whereas “artists are completely insensitive to the surroundings in which they live.” She quotes the poet Rilke writing about the sculptor Rodin. “‘When I first came to Rodin…I knew that his house was nothing to him, a paltry little necessity perhaps, a roof for a time of rain and sleep; and that it was no care to him and no weight upon his solitude and composure. Deep in himself he bore the darkness, shelter, and peace of a house, and he himself had become sky above it, and woods around it, and distance, and great stream flowing by.’”

Elsewhere in the same book she considers the matter in economic terms, referencing Friedrich Engels. “Engels shows that woman’s lot is closely linked to the history of private property; a catastrophe substituted patriarchy for matriarchy and enslaved women to the patrimony…[Engels] writes: ‘Woman cannot be emancipated unless she takes part in production on a large social scale, and is only incidentally bound to domestic work…’”

The Anne Muntges exhibit is entitled Skewed Perspective. It continues through August 9.