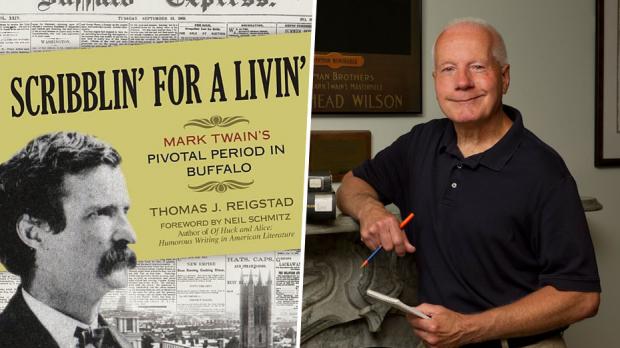 “Twain’s Buffalo experience was pivotal. He came to Buffalo as an unmarried man staking his career hopes on the grind of daily newspaper work. In Buffalo Twain held down a responsible job and launched a stable domestic life. But his commitment to a career in journalism wavered, and a relentless string of deaths and illnesses shook his idyllic, tranquil home life. Twain’s personality and behavior exhibited drastic contrasts, too. He displayed an abrasive side that repelled some people. Yet he managed to mingle easily with influential Buffalonians and to forge lifelong friendships. He departed Buffalo as a husband and father, intent on the lofty vocation of literary artist. After the Buffalo Morning Express, Mark Twain abandoned full-time journalism for good.”

So Tom Reigstad summarizes in Scribblin’ for a Livin’: Mark Twain’s Pivotal Period in Buffalo, his detailed and informative accounting of this iconic author’s 20-month stay here between 1869 and 1871.

(Note: In this column I use Samuel Clemens’s pen name, Mark Twain, as does Reigstad. His common name is honored in Clemens Hall on the University at Buffalo North Campus.)

Those months began well. His The Innocents Abroad had been published to critical acceptance and bestseller status. Twain’s prospective father-in-law, Jervis Langdon, helped him buy half interest in the Buffalo Evening Express. He contributed many pieces to the newspaper; however, much of his time those early months were spent on the lecture circuit. Between November 1, 1869 and the following January 21, he spoke to 50 audiences.

He was still developing the style that would serve him so well later, and a few of those talks did not go well. After one the Jamestown Journal suggested that “if his lecture weighed 225 pounds, then 224 pounds, 13 ½ ounces were nonsense.” He had walked into a local tiff between those who wanted serious talks and those who wanted simply to be entertained.

But unknown to Twain during this period, his fiance, Olivia Langdon, and his father-in-law were conspiring secretly to purchase and furnish a home for the couple at 472 Delaware Street. After their wedding on February 2, 1870 at the Langdon home in Elmira, the happy couple took the train to Buffalo where the bridegroom expected to move his wife into his boardinghouse apartment. Instead, to Twain’s surprise the couple was driven by sleigh on a ride which he later described as “all over America” to their new, completely furnished home staffed by a cook, maid and coachman and provided with a horse, sleigh and carriage as well as plenty of food and coal. Reigstad describes Twain as “bedazzled”; but the author couched the deception in his own language: “a first class swindle.”

Unfortunately the idyllic period that followed only lasted a few months. By May, Olivia’s father was ill and the couple shuttled to and from Elmira dozens of times before Jervis Langdon died on August 6, sending Olivia into deep grief and their home into a house of mourning: curtains drawn and furniture draped in black. To add to the suffering of this dark period Olivia’s visiting friend Emma Nye died in their home in September. Olivia herself nearly miscarried in October but finally in early November Twain’s first child was born a month premature. The pressures on Twain were so great during this period that he was able to make no progress on his book, Roughing It, about his early life in the west. With Olivia an invalid and the baby dying, the couple quit Buffalo for her parents’ home in Elmira. Just before they left, Twain wrote a friend that he had grown “at last to loathe Buffalo.”

Despite these final depressing months and his quite reasonable comment given the circumstances, Twain did not desert Buffalo. He maintained many friends here and returned over a dozen times.

Okay, that’s the history. Reigstad is not simply narrating a tragedy although that story alone is important in that it would certainly contribute some of the darker thoughts that color some of Twain’s later writing. Rather, like us, Reigstad is interested in the writing itself and he illustrates Twain’s early promise and growth with 70 pages of excerpts from his newspaper writing.

Most of us know Twain from his novels: Tom Sawyer, Huckleberry Finn, The Prince and the Pauper and A Connecticut Yankee in King Arthur’s Court; his pseudo-autobiographical stories: Life on the Mississippi and Roughing It; his travel narratives; and the lectures reworked by Hal Holbrook and other actors. All these, even including the lectures, are extended works, the stories carefully organized and usually concluding with a superb and often unexpected punch line. Here we see a different Twain, writing brief notes in “Police Court” and “People and Things” columns. Consider some excerpts to whet your appetite:

“Mark Twain hath spoken. The mountain hath heaved and opened, and the mouse hath come forth.”

“I borrowed Jenkins’ velocipede and tried the slack rope performance over Niagara, but it is only a partial success. I have got to the middle, two hundred and twenty feet above the river, as well as Jenkins or any other man could do it, but I cannot get any farther.”

“Chang and Eng, the Siamese twins, have an aggregate of seventeen children, but most of them belong to Chang, because Eng was absent part of the time.”

“The river Nile is lower than it has been for 150 years. This news will be chiefly interesting to parties who remember the former occasion.”

“A Mrs. Birney, living near Tippecanoe, Harrison County, Ohio, has for twenty years been in the habit of falling into a state of unconsciousness at about ten o’clock on Sunday mornings, during which she delivers ungrammatical religious discourses. Of course, when a woman does anything remarkable, it must be published far and wide, but acres and acres of poor clergymen can go on doing such things all their lives and a subsidized press takes no notice of it. A mean partiality ill becomes journalism.”

“The most wonderful comet the world has ever seen has been advertised to appear and remain visible during the months of July and August and September of this year, and grow constantly brighter until it has finished its engagement, when it will depart in the direction of Saturn to play an engagement in the provinces. The journalists of Wisconsin are observing it now, though why a comet should visit Wisconsin before it visits New York is another of those astronomical mysteries.”

“What goes with the worn-out bank notes, if there be such things, and what becomes of dead mules, if any?”

“Our gratitude in learning that Saint Beuve is recovering is only equaled by our ignorance in not knowing that he had been sick, and our entire indifference about the matter anyway.”

“Children in Iowa bite rattlesnakes in order to prevent the toothache. Probably the cure would be more permanent if the rattlesnakes bit the children.”

“Two travelers, stopping at a Des Moines hotel, came near losing their lives last week, by blowing out the gas on retiring to bed. One of them, when asked if he smelt anything wrong, said yes, but he thought it was the other fellow’s bad breath.”

“Mark Twain estimates the distance by rail from San Francisco to New York at 211 games of euchre, 173 drinks and 117 cigars, which shows him to be a very slow euchre player or a very rapid drinker and smoker.”

“Poor children in New York collect and sell peach kernels to the druggists at a cent a hundred. Adepts make as much as thirty cents a week at it sometimes. They are fast acquiring harmful luxurious habits through the influence of these sudden and violent accumulations of wealth.”

“John Wagner, the oldest man in Buffalo—104 years—recently walked a mile and a half in two weeks. He has never tasted a drop of liquor in his life, unless you count whiskey.”

I found this book informative, but in the end also highly entertaining.