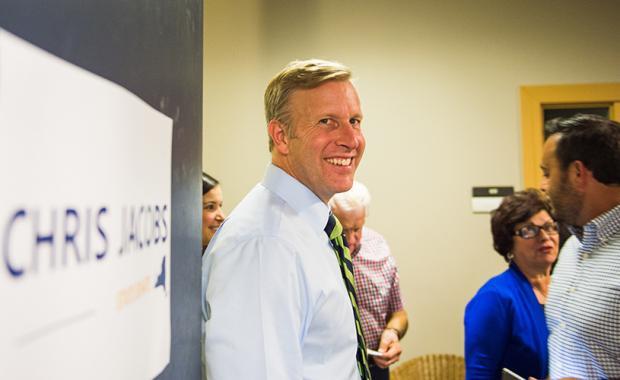 60th District State Senator Chris Jacobs, a Republican, faces a potentially strong challenge from Democrat Carima El-Behairy—but there are insurgent minor party candidates, too, who might influence the race. Photo by Joed Viera.
by
Justin Arney
/ Jun. 22, 2018 8am EST

Just as in New York State’s governor race, minor parties are threatening major party candidates here in Western New York.  With good reason, Liz Benjamin of Capitol Tonight fame (weekdays at 8 pm on channel 9) refers to the State Senate 60th District as “Beirut on the Lake,” because of its resemblance to the multifaceted civil war in Lebanon that never seemed to end with intra-party fighting and shifting alliances that made it a ceaseless free-for-all. Others in Albany and New York City simply refer to the 60th District as the “Wild Wild West”-ern New York district.

The 60th District seat is presently held by Republican Chris Jacobs who has endorsements and support of the Conservative, Independence, and Reform parties. He is being challenged by Democrat Carima El-Behairy, who will also get endorsements and support from the Working Families and Woman’s Equality Parties. But a race in the 60th District could never be as simple as that. Since the turn of the century the district’s elections have been chaos. The district has had seven different senators during the last 18 years. While it’s quite common for senators to serve for decades, the last senator to serve over six years was Anthony Masiello, who was first elected to the senate in 1980.

The problems for Republican Jacobs and Democrat El-Behairy come directly from the Independence and Green Parties. For Jacobs, an Independence Party revolt is being fueled by major league Democrats from New York City. Although there hasn’t been any reporting on it, it’s not a secret that State Senator Mike Gianaris, the head of the Democratic State Senate Campaign Committee, has been noticed in Buffalo, as well as operatives of New York City Mayor Bill de Blasio, at meetings that have taken place in Buffalo at a restaurant owned by George Soros. For El-Behairy, there’s the local Green Party; because they refuse to use fusion as a tool, they do nothing but pose a threat to any Democrat running for office, anywhere. El-Behairy will have to keep an eye out for Green candidate James DePasquale, who ran two years ago, despite the best efforts of the local Green Party’s leadership to remove him from the ballot.

In his 2016 State Senate race, DePasquale received more votes than Cuomo’s Women’s Equality Party and Paladino’s Reform Party combined, and received many votes from non-Greens, and that could make a difference if there are five names on the ballot in the general election. This year DePasquale’s campaign staff has grown and insist they will be able to double their number of votes. DePasquale has stated, “2018 is the year I could really give every political party exactly what they deserve.”