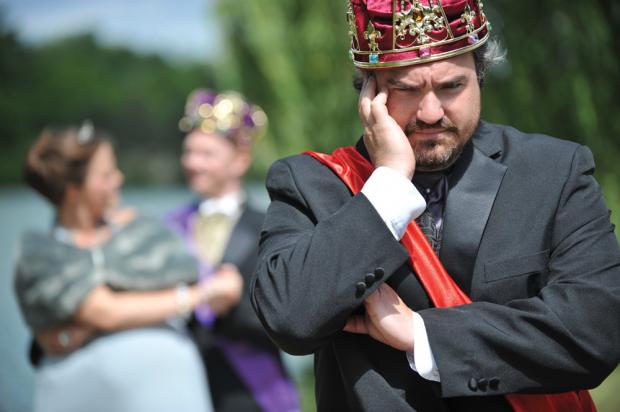 Recently, I have overheard several different conversations about the play The Winter’s Tale. Clearly, their comments anticipate the start of the 41st season of Shakespeare in Delaware Park. The comments wonder what The Winter’s Tale is about, that it is hard to understand. Some have misidentified it as a little known play. In the history of Shakespeare In Delaware Park, this script written late in Shakespeare’s career has been produced three times previously, in 1976, 1988 and in 2000. Even in Western New York there has been ample time for theatergoers to take in this show. Misjudged, but certainly not little known.

Scanning the content of The Winter’s Tale, one can see that Shakespeare’s story is no more confusing than the script for Disney’s Frozen. Central characters in both are royalty, since royals are more interesting than more familiar mortals: capable princesses with their authoritatively regal fathers. Even when these royal families do not get along, their dysfunctions in their castles are more intriguing than those at our kitchen tables. The locales for these stories are in foreign kingdoms are by design to further pique our interests.

And so, The Winter’s Tale begins in the court of Leontes, king of Sicilia. Leontes is married and his goodly queen is Hermione. Together they have produced an heir, a boy name Mamillius who is the joy of his father’s life, and Hermione is about to deliver their second child. The entire Sicilian court is celebrating a visit by King Polixenes of Bohemia. Polixenes and Leontes were childhood friends and their reunion is a happy occasion. But if you have even only a little knowledge of storytelling you can predict what will happen when the plot-line reaches the point of “and everything and everyone was happy…”

Polixenes promptly announces that since he has been away from Bohemia for nine months, he must immediately return to his own court and his own family. This upsets Leontes so he implores his wife to ask Polixenes to stay longer. At Hermione’s request, Polixenes agrees to stay longer, but this triggers suspicion and paranoia in the Sicilian king who begins to believe that Polixenes is the father to Hermione’s yet-to-be-born child. Secretly he commands Camillo, one of his attendants, to poison Polixenes. Instead, Camillo warns Polixenes and the two have escape to Bohemia. When Leontes hears of this news he publicly accuses Hermione of adultery and sends her to jail on charges that the unborn child to-be is Poliixenes’ bastard. The lords of the Sicilian court implore Leontes to be merciful so he sends two of the lords to an ancient temple for a divine pronouncement. In the meantime, Hermione gives birth in her jail cell to a daughter. Hermione’s trusted lady in waiting, Paulina, brings the infant to the king hoping the sight of the newborn will soften his heart. This only further angers Leontes.

To spare the infant from her father’s wrath, Paulina’s husband is instructed to sneak the baby out of court to a safe place. The lords return their mission with word that the gods declare that Hermione and Polixenes are innocent, and that Leontes will have no heir until his lost daughter is found. Leontes still refuses to believe it as the truth. Tragically, as this news is revealed, word comes that Leontes’ son, Mamillius, has died of a wasting sickness brought on by the accusations against his mother. Hermione, meanwhile, falls in a swoon, and is carried away by Paulina, who subsequently reports the queen’s death.

Leontes, repentant in the face of these deaths, vows to spend the rest of his days atoning for the loss of his son, his abandoned daughter, and his queen. Meanwhile, Paulina’s husband has carried the infant daughter to Bohemia. Stating that he was instructed by Hermione, who he has seen in a dream, to name the girl, Perdita or “little lost one.” He leaves with her a bundle containing gold and other trinkets which suggest that the foundling is of noble blood. A violent storm suddenly appears, wrecking the ship which results in one of Shakespeare’s most famous stage directions: “Exit, pursued by a bear.” Perdita is rescued by a shepherd and his son, also known as “Clown.”

All these twists and turns take us to the middle of The Winter’s Tale, the most likely point of the narrative when viewers begin scratching their heads and reach for their copy of Cliff Notes. The first half presents a network of problems all caused by bad human behavior. The dark nature of Leontes paranoiac jealousy has resulted in the destruction of his family, the ruination of trusted friendship and the fall of the court of Sicilia leaving much unanswered. The first thing audiences will want answered is what will become of Perdita. Thereafter, most pressing is how Leontes will transact reconciliation based upon the prophecy handed down to him.

And what about that bear? The bear in The Winter’s  Tale has been a matter of theatrical speculation for 400 years. There is no proof either way whether early productions of this play used an actual bear on stage, although bears and bear-fighting were rival entertainments in Elizabethan London. It also seems decidedly un-theatrical to have an actor in a bear costume chase after Antigonus in what should be the show’s great moment of suspense.

Theater, it must be remembered, is an art in which those presenting it do not just tell a story, but enable the audience to actually witness the story. Viewers deserve to see lovers falling in love, not just to hear about it. To see foes stab each other in the back. In order to make the reconciliations needed to complete The Winter’s Tale credible we need to see them in action rather than just hear about them. But how can Leontes apologize to a queen we’ve been told has died. It would seem that a little magic would be called for, or at least a bit of stage magic.

To everyone’s advantage, Shakespeare in Delaware Park will share with audiences $1.25 million worth of stage magic this summer, premiering with The Winter’s Tale. The company has been conducting a capital campaign to provide production and hospitality amenities on Shakespeare Hill.  This year, the company will unveil its new stage equipped with new lighting and sound equipment.

The primary advantage to the new stage is that it was designed to be assembled with greater ease that the home-created stage it is been using for the past 20 years. It comes together in about half the time needed for the stage it replaces. The new stage is both sturdier and lighter in weight than it’s predecessor so that it takes fewer laborers to put it together so that rehearsals can begin in the park at an earlier date than in previous years. With subtle changes, the space on the lawn is maximized for greater seating area.

Flexibility provides SDP and its audiences with three different stages. Depending on the needs of a particular show each summer there can be a different arrangement of towers, staircases and open spaces. Each summer one stage will be in use in the park while the other two will remain in storage.

The new stages are supported by an inventory of lighting and sound equipment. Shakespeare’s stage did not have the advantage of sophisticated stage trickery although there was interest in theater technology. A excavation at the site of an old London theater recently unearthed a specialty whistle to create the sounds of birds. It is fun to think this was used in Romeo And Juliet during the lovers’ post-coital debate whether they could hear a nightingale or a lark.

SDP’s supply of new lights will best be appreciated after sunset but the sound advantages should be immediately noticeable.