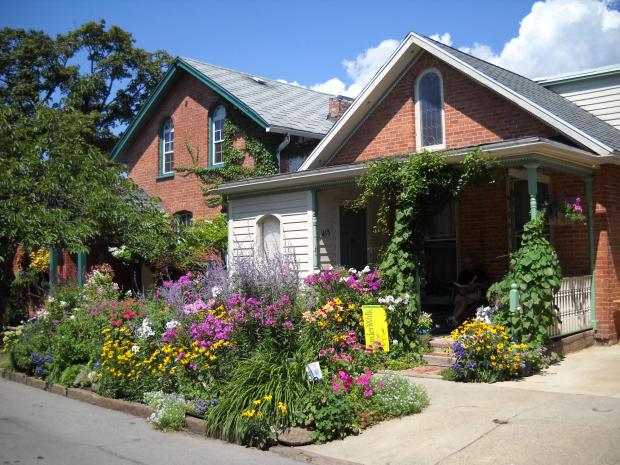 The Garden Walk, Canalside, the preservation of the Olmsted Parks: all the result of grassroots efforts that paved the way for public and private investments

Eight years ago, a former Cleveland public official and garden aficionado visited us in Buffalo during Garden Walk weekend. She’d heard good things about summer in Buffalo and was delighted by her visit—so delighted that she came back a year later, and brought a busload of Clevelanders to the 2010 Garden Walk.

Cleveland is a big Buffalo, or a small Detroit. It has pro baseball, the Rock and Roll Hall of Fame, a fabulous art museum, a fabulous symphony, literally world-class healthcare, a river as dirty as Buffalo’s, and a death spiral. Cleveland has experienced hollowing-out almost as complete as Detroit’s, losing fully 25 percent of its population between 2000 and 2010 (with a metro dropoff of 17 percent), while Buffalo has dipped only a few points in a stabilized (stagnant?) metro population. But Cleveland had also by 2010 seen a surge to 150 urban farms from a handful a few years before. And the Clevelanders who came to Buffalo in 2009 and 2010 were infected with our renaissance spirit and responded by starting their own garden walk in 2011, expressly modeled on Buffalo’s.

The Cleveland Garden Walk is back on schedule for July 8 and 9 in 2017, and is once again focused on four city neighborhoods. Despite Cleveland being more than twice the size of Buffalo (whether one measures city alone or metro), the Buffalo event is older (begun in 1995), has more gardens (400 compared to Cleveland’s 100), and is expected to draw more than 60,000 visitors compared to Cleveland’s 1,000. It’s impossible to measure the value of the word-of-mouth, but the lesson is clear: A bigger, richer community has decided to imitate Buffalo’s obvious success.

Cleveland is rather like the ruling class in Buffalo, which has decided to endorse a middle-class, grassroots, neighborhood-centered program of self-celebration because its monument-centered program of revival hasn’t quite done the trick of turning back the massive forces of deindustrialization, capital flight, middle-class abandonment, and racial centrifuging. Monuments like the Jake, the fortress-like Cleveland Clinic, the downtown casino, and the Flats haven’t brought the people back. The constituencies of the Darwin Martin House, the Albright-Knox, and even the Canalside diversions are, withal, local, and despite the aspirations of the cultural elite, mainly amenities for the already-resident.

Buffalo’s Garden Walk, however, has been a remarkable home-grown success that draws from far and wide—and because of that success, it has reshaped elite behavior.

Buffalo may have lost its homegrown industrial ownership class in the 1930s, and its unique leverage as the fulcrum of Great Lakes trade in the 1950s, and its university in the 1960s, and its international intellectual leadership in the arts, cancer research, and aeronautics in the 1970s—but Buffalo’s glory days, between 1860 and 1920, bequeathed it architecture, parks, and visual arts whose appreciation and revival are the cornerstones of its current renaissance.

For that, we can thank Buffalo’s middle-class pioneers in historic preservation and parks revival, and small groups of individuals who curiously persisted in fights against the forces of homogenization, suburban sprawl, and the pernicious financial mechanics of bankers who have thrived on relentless abandonment of the urban core that has created ever-greater opportunities from suburban sprawl.

These days, smart elites have joined the long-existing, homegrown, middle-class embrace of Buffalo’s oldest distinctive icons. That embrace was helped along by the 1999 publication of Classic Buffalo, a book of architectural photography that included monuments but also neighborhood vistas.

The most enduring autochthonous work has been in historic preservation. The Allentown Historic Preservation District has existed since 1978.  There has been a vernacular understanding since then that the mid-to-late-19th century housing stock in Allentown area was special zone, a destination for a relative handful of well-off attorneys, physicians, and business-owners, but also for a far greater number of artists, graduate students, and a diverse rental clientele that has sustained that housing stock precisely because its aesthetic character has ever been priced approximately at the same level as Cheektowaga’s—which is to say, higher than the largely African-American East Side, but lower overall than Amherst, Orchard Park, East Aurora, or even the city’s own Delaware and Parkside neighborhoods. Living in this preservation district has never had a high barrier to entry in Buffalo.

Generational conflict helped shape that district just a few years after downtown business leaders (ahem) made insane decisions, like demolishing Shelton Square, erecting the Main Place Mall and the Convention Center at the expense of old Pearl Street and of the hub-and-spoke design of Buffalo’s ancient renown.

The contempt that local elites had for rowdy preservationists was generational, but it was also rooted sturdily in class. Thus did penniless Boomer activists, and a few not-quite-penniless Boomer attorneys channelling the spirit of Nader’s Raiders in the post-Watergate era, thrive on the contempt of their elders.

So before the current “official” Buffalo renaissance began, there were the grassroots fights, led by educated middle-class Boomers, to preserve the downtown telephone building, but also the Olmsted Park system, crystallizing in 1982 with the founding of Friends of Olmsted Parks, the predecessor of the Olmsted Conservancy. Educated middle-class Boomers were consciously or unconsciously emulating the City Beautiful movement, but they were mainly rejecting suburbanization and Robert Moses and his epigones like Harry Quinn, chief engineer of the Kensington Expressway, which destroyed Frederick Law Olmsted’s Humboldt Parkway.

When the Preservation Coalition took on City Hall on its tendency to allow Friday-afternoon emergency demolitions of handsome sites like Ohio Street’s Harbor Inn, or the Squire Building at Main near Utica, it was guerrilla theatre. When activists met in Days Park in 1997 and gathered up rakes, snow shovels, and garden spades and took them down to the then-buried Commercial Slip to confront state officials with a threat to “dig history or we will,” it was class and generational rebellion—another assertion for the genuine, the unique, the irreplaceable, the local.

Nowadays, everyone celebrates the food and the extraordinary spaces at the magnificently restored Lafayette Hotel, with its Art Deco ornament, its intricate 1940s inlaid-wood murals of the Buffalo airport and of Buffalo harbor, and its restored trompe l’oeil ceilings—except, of course, when everyone is celebrating the extraordinary spaces of the magnificently re-imagined H. H. Richardson Buffalo Psychiatric Center, now home to the Hotel Henry, where the food is great, the drinks deep, the ceilings impossibly high, the light of late spring a revelation. The million-dollar donors and their followers all followed more than two decades of public investment in restoring the Darwin Martin House complex, which is now nearly complete in a Parkside neighborhood whose homeowners have enjoyed a sensible scale of life in homes that by any other measure than Frank Lloyd Wright’s would have been more than adequately, more than comfortably luxurious—but with all that public money and private philanthropy pouring in, the whole surround is even prettier than before.

The big donors followed the grassroots and the public money. The grassroots embraced the area west of Main Street until the officialized Olmsted Conservancy helped spread the wealth to Martin Luther King, Jr., Park, but the Garden Walk stretches eastward only as far as Main Street, and not past. The African-American middle-class homeowners and rental-property owners have not joined in. Nor have their counterparts in South Buffalo, Riverside, or North Buffalo.

Yet it is all a digestible portion.

Very modest-income households participate in this endeavor, because creating a pretty yard needn’t be a matter of earthworks, fountains, exotic cultivars, or ceramic faeries—just seeds, and watering, and sun, or shared hostas and shade.

The sense of place has taken root. The volunteers who set up model railroads in one of the houses of the Botanical Gardens have stepped up their game, thus: There are scale models of downtown Buffalo buildings, including Shea’s Buffalo theatre, and the building next door with the white glazed-tile facade that used to house Laube’s Old Spain restaurant, and George & Company costumes, and the Hippodrome billiard parlor. There’s the old Erie County Savings Bank in miniature with its gold dome, and the Liberty Building, and even the building that used to house the music store where young Al Boasberg sold jokes and routines to visiting performers like Jack Benny and Bob Hope, until the Buffalo jokester left home to write A Day at the Races and A Night at the Opera for the Marx Brothers.

The protesters of the 1970s fought back against their elders and rescued old buildings, Olmsted’s parks, and the Commercial Slip. They made it safe for the local plutocracy—which has not erected a single iconic office building, opera house, library, museum, or concert hall—to embrace a philanthropy of preservation, restoration, and of tax-credit-driven adaptive re-use of structures from Buffalo’s former great age.

Local vandals used to kick in windows at the Darwin Martin House. The Buffalo Psychiatric Center was largely abandoned. Bethune’s Lafayette Hotel was an SRO flophouse. Now, because of activists, Buffalo may yet conceive a re-use for the Central Terminal, the DL&W Terminal, and other sturdy stone and concrete bequests, probably with public funds, probably with preservationists’ litigation, and, eventually, when it’s socially safe, with philanthropy from those plutocrats who aren’t just taking tax credits or claiming that they’re donors when they’re actually just using their businesses’ advertising budgets.

In the meantime, there is Garden Walk, a very democratic event, a dramatic assertion of more than 20 years of the power of individual caring, in a general sort of collusion or conspiracy with similarly souled neighbors, nothing terribly complicated except of course for the formidably talented and the admirably committed—but withal, a very sane rebuke of the old idea, left over from the sad age of deindustrialization and suburbanization, that Buffalo isn’t a place worth tending. Given that there is still an aggregate of more than 1,500 acres of parcels that are assessed at under $10,000, there is precisely no quantifiable case that vernacular, popular efforts at aesthetic uplift are displacing low- or moderate-income households; and given that the overwhelming majority of real-property wealth in the region remains beyond city limits, there’s also no evidence that vernacular beautification, preservation, and adaptive re-use projects are making rehabbers and parks-promoters into tycoons.

But let’s not shrink from asserting what Clevelanders and other admirers have already figured out—which is that Buffalo’s activists have reclaimed, restored, and reinvigorated the built environment here, and have driven politicians from the late Daniel Patrick Moynihan to Andrew Cuomo to invest in unique structures and spaces, and that it’s citizen participation that has made it safe for the economic elite to pitch in. Of such embrace of ancient wealth, with new energy and new combativeness, is a renaissance made.