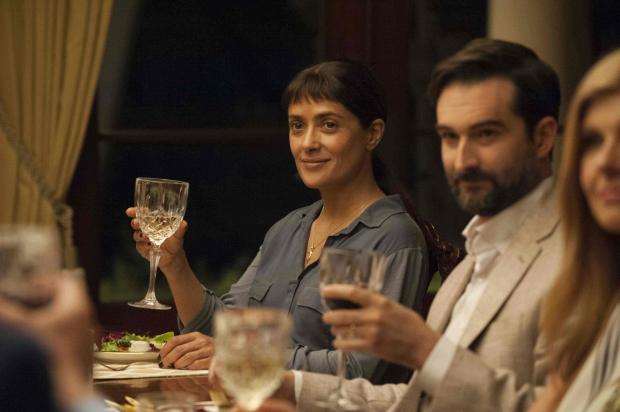 Miguel Arteta’s Beatriz at Dinner almost certainly wasn’t designed to reflect specific recent political events in the US, given the time it takes to complete a motion picture project, but it seems unmistakably apropos to the American condition in the Age of Trump. This intimate movie certainly tries to call attention to very unwholesome trends, especially our increasingly concentrated and dangerous economic and political advantage at the top. Its direct focus is mostly small bore, but there’s no reasonable doubt about the intentions and implications of the people behind this picture; they’re obvious. Unfortunately, they’re rather too obvious.

Beatriz (Salma Hayek) is a 40ish, Mexican-born masseuse and spiritual healer at a clinic in southern California.  At the beginning, she makes a special visit to a wealthy client whose leukemia-suffering daughter Beatriz treated years ago.

Beatriz is salt of the earth, but she’s also attuned to the goodness and power of nature, and seems to practice a personal sort of pantheistic faith. Her client, Kathy, the wife of a wealthy developer (Connie Britton), seems to regard Beatriz with genuine gratitude and admiration, and when her car won’t restart, she doesn’t hesitate to invite her to the small but important dinner party that’s shortly to start at her family’s gated mansion.

This setup isn’t entirely persuasive, but Arteta and his excellent cast handle it so capably, perhaps we can let that pass. Hayek acts her way through these scenes with an intriguing sense of emotional depth and curiosity. She approaches this turn of events with an air of inquisitive apprehension but innocent goodwill. The script will too soon let this gifted actress down.

The pretext for the little gathering is a celebration of a hotel construction deal Kathy’s husband Grant (David Warshofsky) has with a real estate nabob, a man quickly revealed as the aggressive exemplification of earth-destroying, society-endangering capital.  Chomping on a cigar, he advises Grant to start construction immediately before anyone files an environmental objective.  Spying the silent Beatriz standing alone nearby, he mistakes her for a Hispanic hireling and asks for another drink. At dinner has asks, “Did you come here legally?  I’m curious.”  Did I mention that this avatar of corporate dominance and despoliation—marvelously played by John Lithgow—is named Doug Strutt. (I mean, really!)

Since we can easily guess where this is going, it’s to the credit of Arteta and his cast that it holds our interest, and keeps our sympathy as long as it does. The movie’s smoothly directed and the visual scene setting is fluid and supportive. But Arteta and writer Mike White, long-time collaborators, have freighted the movie with simplistic assumptions and overdrawn conflict that comes across as self-righteously liberal and thin.  Beatriz’s naivete may be necessary to the emotionally pretentious resolution, but that’s part of the problem.

Arteta and White may have sensed the problem. There are a couple of notes of ambiguity in Doug’s behavior, although part of the effect is surely due to Lithgow’s performance.  And Britton’s Kathy is treated as decent if subject to a privileged innocence.  It’s not enough to justify the movie’s general strident tenor.