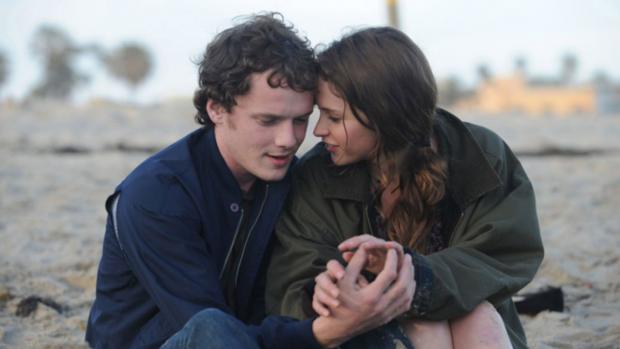 We first see Beatrice (Valeria Bruni Tedeschi) parading the grounds at this antique Tuscan location as if she owns the place, barking out suggestions and orders to the staff and other residents. In her endless chatter (whoever wrote her subtitles clearly had to do a lot of condensing) are dropped so many names that for awhile it’s hard to take her seriously. Enough of it proves to be true that maybe it all is, and so maybe this facility was a gift from her family. But Villa Biondi is now a psychiatric facility, and even though she has filled her quarters with all the clothing and perfume she could pack, her presence her is not voluntary.

New arrival Donatella (Micaela Ramazzotti) couldn’t be any more different. Scrawny, tattooed, with a haircut she clearly gave herself at a low moment, she has only the clothes she’s wearing and no possessions other than an old cel phone and a flashlight she uses to be able to sleep at night.

Maybe not in real life, but of course drama thrives on contrasts. Like Crazy (a clumsy but understandable substitute for the Italian title, La pazza gioia) was an official selection of last year’s Cannes Film festival and a winner of the Italy’s Donatello Awards for Best Picture, Best Director, and Best Actress.

It was directed by Paolo Virzì, whose Human Capital played here early in 2015. Looking to make a warmer film about characters struggling for their individualism, Virzi and co-writer Francesca Archibugi (a noted director in her own right) did research with psychiatrists and psychotherapists as a way of looking for characters from the outside in. Their story takes place in 2014, just before Italy’s Judicial Mental Hospitals—jails for the mentally incompetent where patients received little help—where legislatively abolished. While the facility in Like Crazy isn’t one of those, Italian viewers were meant to recognize that they were a threat held over the heads of these women.

But this is less an issues drama than a story of two characters bumping up against each other and growing in the process. Beatrice and Donatella end up on the road together after an unintentional escape. Beatrice’s ability to talk her way into and out of any difficult situation gets them out of as many tight scrapes as it gets them into, and over the course of a trip that leads them to a variety of locations, we learn that their personalities and the circumstances that led them to Villa Biondi.

Bruni Tedeschi, who was the trophy wife in Human Capital, has the showier role and makes the most of it. But her diva display doesn’t completely overshadow Ramazzotti (the director’s wife), whose story is the one that will have viewers clutching their handkerchiefs before the finale. The substantial variety of shooting locations and supporting characters (including actual mental patients at Villa Biondi) keep the film feeling much shorter than its nearly two-hour running time.