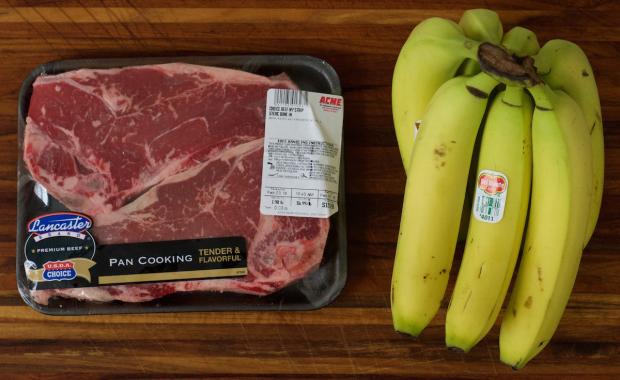 The ethics around veganism as it pertains to environmentally sustainable consumer practices has fascinated me for the better part of three decades. This topic is knotty and stubborn, but it can be rewarding. Unfortunately, I have found that today’s vegans are far less likely to entertain counter-arguments to their dietary philosophies than they were 30 years ago when I was one of them. As veganism gains mainstream acceptance (e.g., Martha Stewart regularly nods to the vegan lifestyle, and McDonalds offers “V” options), I’ve witnessed a simultaneous simplification of the ethics around the consumption of animal-based products. I blame social media for the evaporation of nuanced discussion of pretty much everything, and I blame the USA’s simplified two-party politics for having polarized American thinking in the extreme. I also blame vegan luminaries like DC hardcore musician Ian McKaye of Fugazi, who planted seeds of vegan righteousness in the fertile counter-cultural soil of the punk/hardcore scene I inhabited in the 1990s, and I blame those YouTube drone videos of industrialized farms in the Midwest which expose blatantly inhumane farming conditions (Bravo!), but which also have helped demote subtler discussions of ethical animal consumption to blasphemy (Boo, hiss.). I genuinely miss the nuanced ethical dialogue of yesteryear’s vegans, and I hope to maybe spark a bit of it here.

I was a vegan for close to 10 years. I started in 1985 at age 15. I sat on our kitchen counter one afternoon and told my mother that I was no longer eating anything with animals or their milks in it and that I was going to get rid of all my animal-derived stuff: wool, down, leather, etc… This was Buffalo, NY, then a hot bed of ultra-high-calorie working-class cuisine served in portions far larger than the national average. Vegetarians were hippies and wussies and worse; vegans were unheard of. There was no vegan culture available to me; no Google to turn to; no “V” options on menus; and only a handful of vegetarian cook books I could find that contained a few dairy-free recipes. So scarce was information about being vegan that I didn’t even learn the word “vegan” until nearly three years after becoming one.

My choice to stop consuming animal-based products was vaguely tied to my fascination with Rastafarianism (I soon grew dreadlocks, but smoked zero weed and denounced all religion) and to hardcore straightedge philosophies (this was before McKaye formed Fugazi). Punk geniuses like The Bad Brains (Rastas) and Black Flag (stoners + straightedge singer Henry Rollins) mattered deeply to me, and I cherry-picked from their hardcore philosophies and concocted my vegan stance.

More importantly, though, I loved animals, especially our family cat, Pippin, and all cats everywhere. Mine was an unusually deep cat-love, the kind that leads one to conclude that felines are a far superior species than our own, a notion to which I still mostly subscribe. Then I read Upton Sinclair’s 1906 novel The Jungle. Sinclair’s descriptions of Chicago’s crudely equipped slaughterhouses shocked me far more than any drone footage of modern slaughtering practices ever could. That book, my love of cats, and my punk/hardcore/Rasta concerns converged to form my vegan resolution. I had taken an Admirable Ethical Stance.

In hindsight, however, I can see that my veganism was a desperate attempt to gain control over my body and my life. Due to some tweaky experiences during my adolescence, I—like so many teenagers before and after me—felt out of control. Everything about my veganism smacked of an eating disorder, and it would likely have been flagged as such today. But in Buffalo in 1985 it was easy for me to shroud that disorder in an Admirable Ethical Stance—so easy, in fact, that my high school English teacher made my veganism the focal point of his college recommendation letter. He cited my diet as an indication of my critical capacities, independent spirit, and ethical integrity; he even mentioned my vinyl belt, plastic shoes, and polyester sport coat, as well as the first edition of Emerson’s Walden that I gave him because it had a leather cover. Weirdo colleges like Hampshire and Reed gobbled it up and recruited me hard (a totally unexpected reward of being vegan), but no one, including me, saw the eating disorder.

However, by age 22, I suffered a B12 and amino acid deficiency that got my muscles twitching so violently that I couldn’t sleep. My complexion was ashen, my bowels irritable, my fatigue levels troubling. A vegan friend fell asleep at the wheel and crashed his car. Another vegan friend’s triceps nearly disappeared. A nutritious vegan diet was a complete mystery to us. And then Fugazi (also bereft of triceps) played at Buffalo State College and preached their ethical code to an approving, like-minded crowd; this was the very antipathy of punk as I understood it, and that show inflicted lasting damage to the hardcore philosophies that had previously undergirded my veganism. As the 1990s raced along I was looking at veganism from new angles, and I didn’t like what I was seeing.

I broke my veganism at Alice’s Restaurant on top of a mountain in Santa Cruz, CA, my Volkswagon van parked outside as I sat alone in a booth and ordered a cheese burger, a milkshake, and apple pie with melted cheddar à la mode. Friends had warned me that my body would reject the reentry of animal-based foods, but the opposite was true. Neither before nor after have I felt nutrients course through my body the way I did that day. I moaned audibly with pleasure while tasting these foods, and I choked up with the long-forgotten feeling of practicing self-care. Then I drove down to the ocean and surfed with more strength, energy, and focus than ever before. The next day I snuck into the kitchen of a communal house on the Stanford campus where I was crashing and made an 8-egg omelette with a ½lb of cheddar inside, wolfed it down, drove to the shore and paddled into huge waves, loving the newfound horsepower in my replenished triceps. Within 24-hours I had successfully, joyously, and guiltlessly quit veganism.

Then I bought a wool sweater and a pair of all-leather Scarpa hiking boots. I still own and wear the sweater. My widening feet had me pass the boots on to a narrow-footed friend a few years ago, and he now wears them incessantly (they happen to be fashionable at the moment). Both of those purchases were (gulp) over 25 years ago, and both items are still totally functional. When that sweater and those boots do finally degrade back into the Earth, they will do so in under a decade and nourish worms and plants and trees.

As a vegan I purchased synthetic boots, all of which fell apart within a year, and are now about 25 years into what is likely a 10,000-year degradation. So, too, are the vinyl belt, rubber shoes, and the polyester sport coat. While bamboo and hemp and other durable plant-based fibers are being fashioned into vegan clothing today along with recycled plastics, there is little evidence to deny that animal fibers are, ultimately, superior to synthetics both in terms of environmental sustainability and performance. This is especially true when making garments that will keep us warm and dry. Most “technical fabrics” (Gortex, etc…) are doing their best to imitate breathable-yet-water-proof animal-based materials, and many companies (Patagonia, etc…) are now recognizing that leather, wool, and silk are far more sophisticated and effective in almost every way to synthetic fabrics.

Many synthetic fibers are derived from petroleum. The same stuff that shot out of a well into The Gulf of Mexico and decimated countless animals and their environment. That stuff that huffs and puffs into our air and water and soil and hurts every living plant and animal. That stuff over which wars are waged world-wide, killing humans, cultures, cities, landscapes, economies, and much more at horrific rates. That stuff that provides the raw materials of so many plastic vegan products.

Polyester is common in vegan clothing, especially as an insulation. Polyester is also known to contribute to environmental acidification, even via the shedding that happens when you wash it, let alone the countless tons of it sent into landfill each year as discarded “disposable fashion.” And then there’s Gortex, a Teflon product by DuPont, the chemical giant whose in-house environmental impact study found the fluorinated molecules that make up Teflon to be environmentally safe, while independent studies almost unanimously agree that fluoropolymers “…are virtually indestructible. A staggering prospect given their toxicity.” In other words, this stuff takes eons to biodegrade and is bad for the environment and every living thing in it while it does.

I could go on with the science of synthetics, but I think the point is obvious: natural fabrics are relatively environmentally benign as well as incredibly long-lasting, and that’s good for every living species, plant or animal. My personal rule of thumb is that if I wouldn’t be willing to mulch with something, I will do my best to avoid acquiring it. Cotton and hemp are great, but when I need to stay warm and dry I’m in leather, wool, silk, down, and bees-wax-soaked cotton whenever possible.

I am not out to condemn vegans. I am out to introduce the nuance of environmental science back into the discussion around the consumption of animal products. I adore all animals, and it makes total sense to not want to kill them. However, a broader look at ecological systems and our place in them reveals a complexity filled with counterintuitive evidence, especially for animal lovers and vegans. One of the more nuanced and simpatico conversations I’ve had with vegans lately is over the exponential growth of the human population globally and its impact on the environment and the animals in it. But too often this discussion stops short and grows illogical when I mention sustainable and humane animal consumption. The impasse often has to do with our differing definitions of “humane,” and I can count on one hand the number of vegans I’ve met in the past decade who will entertain my thoughts on that subject. My hope is to start counting on my other hand.