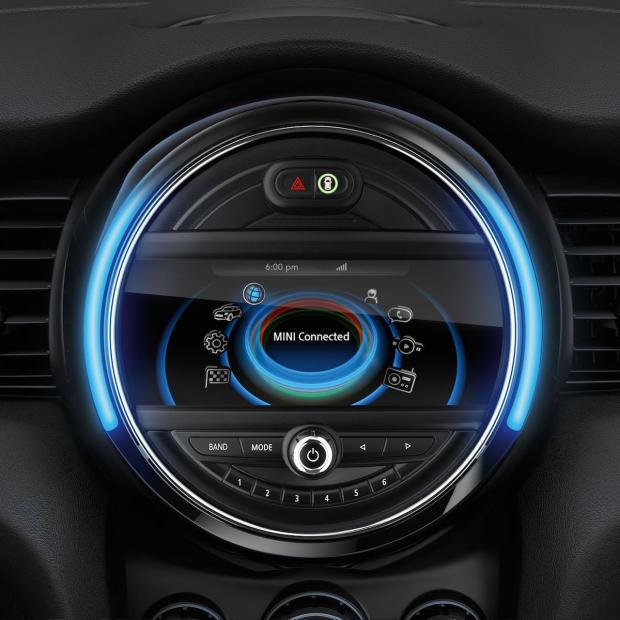 At the Tesla dealership I sat down in the new “affordable” $35,000 sedan and was immediately turned off by the giant iPad that is the center console. It wasn’t even on, just a black screen ready to connect me to a hundred things that I thought were illegal to fuss with while operating a vehicle. We bolted out of Tesla and hopped over to the MINI dealership for a spin in the new base model. The entire test drive consisted of my partner trying to coax a reaction out of the three cylinder engine while the salesman fiddled with the touchscreen. No discussion of safety features, or mileage, or anything we were actually shopping for. On the screen, the salesman showed me that all four tires were slightly off their target pressure, washer fluid level was good, oil fine, and then he showed off a list of nearby restaurant reviews and all kinds of things that any of our three phones could have shown us.

One thing our phones can’t do, however, is change the color of the LED accent lights throughout the car’s interior. The salesman seems genuinely excited about this as he twists a rotary knob located where the parking break aught to be. We’re scrolling through endless menus until he finds the one for the accent lights. Now he’s scrolling through the color options, and I think he chose Tropical, a magenta and blue combo that makes the car’s interior look like a sketchy nail salon. Now he’s scrolling over to “the music system,” scrolling through every genre known to man, now scrolling through decades, through artists, through albums, and finally he scrolls to an actual fucking song. Dude chose “Fly Like an Eagle” by the Steve Miller Band, a surreal pairing with the Tropical light scheme.

The Tesla gets 131 miles per gallon, but no one seems able to calculate real annual costs of running this car, let alone whether electric cars are actually better for the environment. I’m no scientist, but I grok the First Law of Thermodynamics well enough to know there’s no free lunch when it comes to powering engines capable of hurtling a 3,800lb car down the highway at 140 miles per hour. Today’s gas-powered cars get appalling mileage given the technology available. In the 1980s, one could buy a big heavy Mercedes Diesel 5-cylinder that got 33 miles per gallon or a BMW 528e mid sized 4-door sedan with a straight-six that got 34 miles per gallon, but that 3-cylinder MINI gets just 35 miles per gallon and tops out at 134 horsepower. What? I had a Honda Civic in the 1990s with a V-tech engine that got 56 miles per gallon and could put out 160 horsepower. What about a Prius? I’m not about to spend $25,000 to get 56 miles per gallon from a 4-wheeled iPad whose environmental impact remains mysterious in the hands of the Regional Power Grid Overlords. For all I know, driving a Prius generates nuclear waste.

Driving a great car can offer up a wonderful buzz. It doesn’t have to be a Porsche 911, and, in fact, despite being loaded with pant-shitting amounts power and performance, most modern high-performance cars are bereft of the kind of driving pleasure I seek. I took a friend’s 2017 BMW M4 out for a spin, went from 0-60 miles per hour in under 4 seconds with nary a glitch as launch mode did everything perfectly on my behalf. The Gs were impressive, but even with the top down and 493 horsepower at my disposal, this car felt virtual to me. I want to actively manage a machine, not play a video game.

What’s especially funny to me about modern cars is that they’re a pain in the ass to keep in the lane. The steering wheels are tiny, which increases sensitivity, and the front ends are so responsive as to feel twitchy. The sportier a car feels in a test drive, the better it sells. This is because you’ll imagine it’ll be safe, fun, and rewarding to own—until you’re 300 miles into a Thanksgiving trek only to find that your kids feel nauseous, your spouse keeps complaining about your driving, and your wrists hurt from having to tweak that little wheel every three seconds. Meanwhile the dude in the 1977 Cadillac El Dorado you parked next to at the rest stop looks refreshed as he smokes a cigar and points to his three kids passed out cold on the enormous back seat. “Works every time,” he says, and you wonder if he’s gloating or if you’re just cranky.

Before we became cybernetic organisms, our days often included long stretches of complete autonomy while driving alone. We were free of each other, largely free of surveillance, free of work, and blissfully ignorant of the fact that artificial intelligence systems would soon be interrupting our favorite song in order to instruct us to turn onto a road we’re already on. I remember driving home from work one day in my manual-steering VW Vanagon, age 19, and literally yelling “Woo-hoo!” because it just felt so damn good to be connected to the road through that enormous steering wheel, to be blasting music, singing along, totally free from everything but the laws governing traffic and physics. My fellow drivers were, I assume, similarly present in their moments, if not quite as enthralled to be on the road. Now we pay yoga teachers to twist us around until we become “present to ourselves and the moment we’re in,” but I was getting cosmically connected just driving home from work.

Most of my friends’ kids are putting off learning to drive. The first time I heard this, I thought the kid was emotionally troubled. I used to steal my Mom’s Mazda for joy rides as early as age 13, so eager was I to command the wheel, to feel that power, to take on that freedom and autonomy. Today’s teenagers don’t crave that? What the hell’s going on?

Apparently, having your driver’s license today means missing out on your social life rather than finally obtaining one. These digital natives have no incentive to get out and mingle because all their friends would still be parked on a couch at home texting each other. What do they do, park down the street and text each other from their cars? And for get autonomy; parents expect their kids to be constantly in touch via texting or, more commonly now, by tracking their kids’ phones with GPS. What incentive is there for giving up the parental chauffeurs? The cars aren’t even thrilling to drive.

I now understand that gluing their phones to their faces is how today’s teenagers achieve independence. Their lives are bereft of the physical autonomy I required, but they have access to endless channels of private, adult-free communication I never had. I’m sure it’s a lot for a kid to manage such a diffuse social life with two thumbs, but I still can’t fathom what couldn’t wait the ten minutes it takes to drive oneself to soccer practice, for example. Obviously kids are communicating about things that feel dire to them, just as I felt the dire need to arrive at the local 7-11 at exactly 6:30pm on a summer evening to find out if so-and-so had made out with so-and-so. Of course, making out required being in the same place, but I don’t know if that requirement holds today. Do kids somehow make out on their phones? I know sexy pics are a thing, but where does that get you, really? I have no idea what goes on, but I get the sense that if making out still exists it’s not happening in the back seat of a MINI.

Today’s kids are being conditioned to embrace self-driving cars, and maybe that’s the ultimate freedom. These kids won’t feel out of control in a self-driver because they’ll never have known control of a vehicle. They won’t miss the thrill of navigating a heavy machine through a tight corner. They won’t care about being surveilled because it’s normal for them. And they’ll probably be thrilled to learn that, indeed, their car is in all meaningful ways a virtual reality equipped smartphone on wheels. While the rest of the world is surfing The Matrix in their commuter pod, I’m hoping to keep my cranky old Land Rover going long enough to avoid that kind of connection entirely.