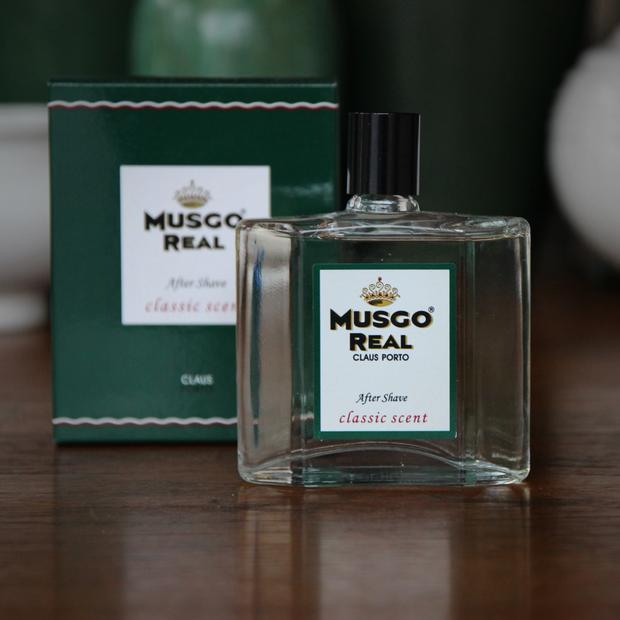 When my father succumbed to cancer and entered hospice, he was only able to fully bathe with the aid of a caretaker. To refresh him, I pulled out a bottle of Musgo Reale Classic Scent aftershave by Claus Porto (a Portugese brand dating back to 1920), dashed some on my hands, and offered my father a whiff. He swooned, said, “Go ahead,” and then audibly luxuriated as I applied it to his face and neck. Later, he discretely asked for his own bottle, which I Amazon Primed to him and then inherited only a few weeks later when he passed. In that short time, he’d used up nearly a quarter of the bottle.

Dad indulging Clause Porto’s Musgo Reale shows us the human side of luxury: a man simply enjoying the buzz of a great scent as mortality raced toward him. Dad and I should have been sharing that indulgence—and so many more—all along. Why do we so readily defer gratification?

Body Buzz explores the good things in life: luxury, fineries, pleasure, self-care, treats, special stuff. “Body” because these aren’t heady things. “Buzz” because why else? Body Buzz is about feeding our senses the finest. Dressing, drinking, dining, decorating, driving—doing anything—with discernment, delight, and a dose of defiance can bring the buzz.

Body Buzz champions total freedom in seeking the buzz. Too often, unwritten rules restrict us from freely indulging some of life’s greatest pleasures, so this is where a little defiance comes in. For example, potent and lasting men’s perfume (not the weak and fleeting cologne we slosh on today) dates back centuries as a sophisticated indulgence, but today it has evaporated into the rare-air of the global elite, such that, sadly, most men (and those within sniffing range of them) forgo one of the best nose-buzzes on Earth. Countless restrictions like these silently surround us, and for no good reason.

But Body Buzz is not focused on rule-breaking, or gender-bending, or being weird. Seeking oddball status would itself be too narrow and restrictive. The goal of Body Buzz is simply to unshackle ourselves, to grow more comfortable seeking pleasure, to luxuriate more readily, however we see fit. For some, the freedom to luxuriate might mean indulging in a vintage fragrance from Floris of London, for others it might mean splurging on a hand-made axe from Sweeden’s Gränsfors Bruk. Or, if you’re like me, it might mean smelling like a million bucks while splitting wood.

I’m relieved that we have matured beyond calling men who indulge luxury metrosexuals, a term that exudes homophobia and harsh restrictions on what constitutes manhood. Unfortunately, we now face the derogatory connotations of hipster, the double-whammy aging hipster (ouch), now gentrifier, and the scornful resurgence of dandy. All these terms point at fashion-conscious men (and women), many of whom help revitalize forlorn post-industrial urban settings—a prickly process in which forward-looking design, fashion, architecture, dining, and so on are integral. Generally, to assign labels like hipster and dandy is to scoff at those who indulge some measure of luxury. The echo of metrosexual is never far behind.

Beneath the negativity of these terms is the good old Protestant work ethic, a deep seated American attitude that evaluates manhood in terms of piety, productivity, and thrift while condemning any earthly gratification as Satan’s charm. To buzz is to sin, a temptation best kept out of reach by working long, hard hours for pay so low a man couldn’t afford to indulge anyways. Today, scoffing at men who indulge luxury rehashes this ancient, uptight, buzz-stomping condemnation.

Despite such restrictions, Americans have always worshiped at the altar of other people’s buzzes. We gaze up at a pantheon of rakish demi-gods: Fitzgerald, Capote, Hughes, Elvis, Sinatra, Prince, Clooney, Pitt, Jay-Z, JFK, Obama, and so on. We praise the promiscuity of the powerful, ogle the opulence of the oligarchy, fixate on the frivolity of the famous, applaud the fashions of the affluent, but typically we Americans toss flack at even the smallest indulgences of luxury in a dude’s own back yard. An American guy can sport a front-lawn campaign sign for a billionaire whose gravity-defying coiffure rivals Andy Warhol’s wig, but just imagine the same guy telling his neighbor over the back fence that he just dropped good money on his own sweet-ass hair-piece—or an inspiring scent, or hand-sewn shoes, or even a massage.

Body Buzz aims to cut through all these unwritten restrictions in order to help normalize luxury and pleasure. It’s time to bring luxury down to Earth, to embrace pleasure as self-care, to go ahead and indulge before we succumb.

Americans buy 7.5 pairs of shoes per person annually. Rather than tossing gazillions of pairs of suddenly-out-of-fashion, non-biodegradable junk-shoes into landfills, imagine each of us wearing a few pairs of beautifully hand-crafted shoes made of natural materials for decades, and then handing them down. (I own and adore my father’s ox-blood brogues, which he bought before I was born, oiled and shined regularly, and had re-soled every decade or so.) By rejecting junk—junk food, junk clothes, junk electronics, junk everything—we can aim toward a world in which obsolescence is not planned, and sustainable regional economies thrive again. Toppling junk-capitalism is a tall order for luxury goods, but hand-sewn shoes, locally-crafted booze, natural-fiber clothing, eco-friendly oysters, carbon-neutral coffee, generations-old watches, trend-immune clothing, farm-to-table dinners, hand-forged axes—all quality stuff—can bring the buzz while contributing to sustainable success stories, region by region.

Don’t let manhood be a cage; let it be a celebration of the senses, a means of ecological and economic transformation, a joy and a freedom. My job will be to lead the discussion.