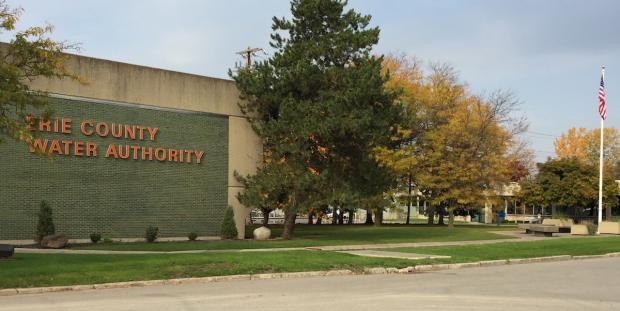 The Erie County Water Authority (ECWA) finds itself at the center of a political storm after the New York State Authority Budget Office (ABO) issued a damning review of their operations and recommended the removal of ECWA Commissioners. The issue began to come to a head with the County Legislature in late February 2018 when it was revealed that ECWA Executive Director Earl L. Jann Jr. had received a golden parachute employment contract from the Board’s Republican majority worth between $300,000 and $400,000, if he was ever fired. This scandal embarrassed the Erie County Legislature during the creation of their new code of ethics, eliciting demands for answers from both sides of the aisle. Most notability, County Legislator Thomas A. Loughran of Amherst (D) introduced a resolution calling for a countywide referendum to dissolve the Erie County Water Authority and to make county water services a department under the County Executive. Legislator Joseph C. Lorigo of West Seneca (C) joined Loughran at the end of May in his recent letter requesting time to air the topic of dissolution at the next Energy & Environment Committee on June 28th. As the Lorigo letter indicates, there is some debate over what authority the Erie County Legislature has to dissolve the ECWA.

In its review of ECWA operations, the first failure cited by the New York State Authority Budget Office is a failure to comply with Section 2824 of Public Authorities Law that requires all members of the board to sign an acknowledgement of their fiduciary duties to act within the law and mission of the water authority.  State ABO officials indicate that ECWA board members “told us that they rely on Authority staff to keep them compliant with the Law, and that staff did not provide the acknowledgement form for signature at the time of the members’ appointments to the Authority board.”

After Commissioner Mark S. Carney was appointed to the board in mid-March, it was also discovered that the ECWA had failed to ensure employees filed their ethics disclosures with the Erie County Board of Ethics in 2017, and that they would need a month extension to June 15 to file them for 2018. Margaret Murphy, council for ECWA met in private with Chair of the Board of Ethics, Steven Schwartz and Assistant County Attorney, Leslie Ortiz-Fogg to discuss the issue of oversight, and discussions got contentious. No public recording of the meeting exists, but public audio of both Margaret Murphy and Steven Schwartz reporting out on the heated discussion can be found online.

In the view of water authority council Margaret Murphy, the problem arose with Schwartz being “under the mistaken impression that their local law [Erie County Code of Ethics], which really dictates what the county does for county employees, is the only law that they follow.” Murphy added, “we tried to point out that the laws passed by the State Legislature set forth policy that they’re supposed to embrace, and by not looking at the public officer law and what our obligation is, that they’re missing a whole aspect of what our fiduciary duty is to their organization… We then left the meeting agreeing to disagree…”

For Chairman Schwartz the issue was that the ECWA “proposes to use our form for their use as well as ours, and to change the questions so they related to… conflicts between [a person’s] ECWA job, their personal life, and the ECWA. So, they were focusing on the water authority, not on the County that we are formed in.” He later added that “It was a bit contentious but finally there was an agreement that they would give two forms. That they would do one form that would say water authority on it, and they would have their staff file the form that we submitted.  So that they get something, we get something, I don’t care what they get for themselves, but they’ll file with us.” Implying that he sees the Erie County Board of Ethics as a board concerned with conflicts of interest internal to the County government and not all possible conflicts of interest under County oversight.

Schwartz’s interpretation of the situation runs counter to Section 2825(3) of Public Authorities Law that requires “Board members, officers, and employees of local public authority are to file annual financial disclosure statements with the appropriate local board of ethics (county or municipal) in which the local public authority has its primary office pursuant to Article 18 of the General Municipal Law.” This law also applies to all other local public authorities such as the Erie County Sewer Authority, Erie County Industrial Development Agency, and others.

The lack of clarity around the ethics process and jurisdiction underscores a failure of County Legislators to write a code of ethics that addresses the full scope of their oversight. An ABO Policy Guidance document from 2007, now posted on the Erie County Water Authority website, advises counties “to adopt a local law, ordinance or resolution setting forth the form of financial disclosure required and identifying the positions and offices to which this disclosure requirement applies. For purposes of financial disclosure, members, officers and employees of a local public authority are considered to be employees of the political subdivision.”  However, the Erie County Code of Ethics, passed in the middle of an ECWA scandal, does not address any of the local authorities considered to be under its ethical oversight by state law.

Another ethical question not addressed by the new ethics code is the influence of political contributions on Authority appointments. The political affiliation of the individuals appointed to board of the Erie County Water Authority is a qualification actually written into the law that created the Authority, and control over the water authority board has been part of the political spoils of winning the majority of the County Legislature since 1949. Control over the board of ECWA has been valuable to both Republicans and Democrats in the form of both appointing staff to Authority positions, and in collecting political donations from people placed in those positions.

Between 2011 and 2017 elected officials, candidates, and political committees of both parties collected more than $81,000 from the six individuals that served on the board, according to state contributions data. With roughly $63,000 contributed by Democrats and $18,000 contributed by Republicans, the board of the ECWA is worth nearly $1,000 a month in contributions to political parties.  Political control over the water authority also grants parties the ability to influence the appointment of “an attorney and an engineer and such additional officers and employees as it may require for the performance of its duties, fix and determine their qualifications, duties, and compensation,” and “from time to time contract for expert professional services” as described in the enabling statute of the water authority. Notable political figures among the water authority contracts are Michael Caputo’s Zeppelin Communications, LLC. and Carl Paladino’s Ellicott Square Court Corporation and 3279 Group, Inc.

The Erie County Legislature is set to debate the legality of dissolving the ECWA in the Energy and Environment Committee on June 28. Real reform of the Erie County Water Authority will require County Legislators to deny political bosses access to a 69 year old system of political spoils, and to amend the code of ethics to ensure the Erie County Board of Ethics provides meaningful review of conflicts of interest in local public authorities. A single hopeful voice stands out in this political storm, that of Board of Ethics member Rebecca Town: “I am just picturing this as an opportunity to provide transparency with authorities where meaningful disclosure is a bigger issue than with County departments.”