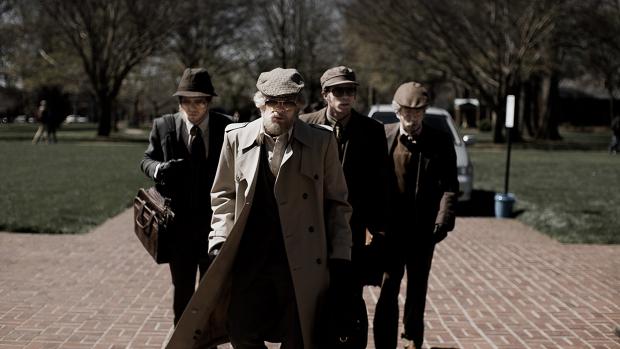 In 2004, a quartet of college students in Lexington, Kentucky decided to steal some valuable books from the rare books room of their university library. That ill-fated venture is the basis of American Animals, a film that opens with the onscreen statement, “This is not based on a true story: this is a true story.”

Of course, the very phrase “true story” is an oxymoron, and in the past few years more than a few documentarians have been taken to task for taking too many liberties with their subjects. Writer-director Bart Layton is not taking that chance, mixing documentary and re-creation not to reinforce each other but rather to do combat. His mostly fictional film includes footage of the people who are being portrayed, recalling the events but not always agreeing on what actually happened.

This is not an entirely new approach. The recent I, Tonya had dueling narrators, and using the real people being portrayed by the film’s actors to call “Bullshit!” on the movie was an element of 24 Hour Party People.

Layton’s other conceit is that these four young men, the promising but unformed children of “good” families, have substituted fiction for reality because they lack any real world experience. The decision to commit a robbery that will bring them fabulous wealth is based on watching too many movies like Oceans 11. (Layton was unable to get permission to use a clip from that film for a scene in which the boys watch movies for advice on how to plan a robbery; instead, he used a clip from Stanley Kubrick’s The Killing.) Their speech is littered with quotes from films like Jaws and The Matrix, and their plan takes way more than it needs to from Reservoir Dogs.

A little of this goes a long way, and Layton fortunately doesn’t let it take over the movie. American Animals gains unexpected emotional resonance in its second half, when (I trust I’m not spoiling anything here) the boys plan goes awry and they are left with the consequences of their actions. We see that despite their stupid actions these really are intelligent young men, and their commentary on what they did and what they have to live with is engrossing and moving. Most poignant for me was the fact that what troubles them the most is an incident of violence that would barely even be noticed in a fictional movie about such a “heist.” In the real world, a little pain goes a long, sad way.