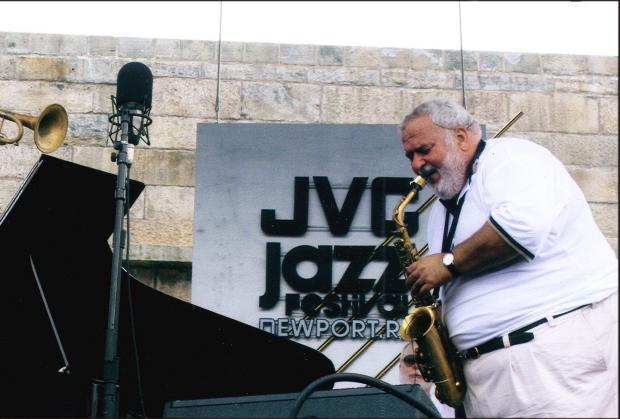 Great artists, regardless of how friendly or “normal” they may be, share a deep intensity. Despite a smiling presence and a laugh that is never far away, that intensity lives in both the playing and the speech of Buffalo saxophone legend Bobby Militello. And his ability to turn that inner fire into great music has led the West Side native all over the world and, most importantly, back.

Over a lengthy career, Militello has played brilliantly with many prominent bands and musicians, for as few as a handful of fans and for as many as 50,000. Regardless of the setting, the instrument he’s playing (mainly alto sax and flute), the other musicians on stage, the tunes that are called, or even the paycheck, Militello’s approach to a performance remains the same.

In a recent conversation, he made that point perfectly clear. “My job is to play, and to bring it wherever I go, to never bring less than my A game, and to surround myself with players who also do that,” he said. For 30 years, he brought his A game as a member of the legendary Dave Brubeck Quartet. Now Militello rolls with his strong and versatile presence on the Buffalo jazz scene, and everything he does is highly anticipated by music fans.

This Friday, June 23, at the Kenan Center’s Taylor Theater in Lockport, the Bobby Militello Quartet—featuring Bobby Jones on piano, Jim Coleman on bass, and John Bacon Jr. on drums—presents “Bobby Plays Brubeck—and More,” the anchor attraction of the inaugural Kenan Center Jazz Series. Tickets are $15 for Kenan Center members, $20 for the general public, and may be purchased online at Ticketleap, in person at the Kenan Center (433 Locust Street, Lockport), or charged by phone at 716-433-2617. Seats may be limited by the time this goes to press, so call or go to kenancenter.org for details.

This is Militello’s first time playing the Taylor Theater. The intimate and underutilized space has recently hosted a couple of jazz concerts featuring sax stalwart Kelly Bucheger and various friends, as well as a limited run of the A. R. Gurney play Love Letters. Response has been good, and the Kenan Center is making money every time the space is used, which means audiences can expect to see more programming in this quirky and versatile Lockport room.

Coming into his Taylor Theater debut, Militello is aware that everyone will expect to hear tunes like the ubiquitous “Take Five” or “Blue Rondo a la Turk,” from the 1959 smash jazz record Time Out that made Dave Brubeck a most unlikely household name. But there are dozens of tunes beyond Brubeck’s “greatest hits” that offer a chance for both the musicians and the audience to discover the breadth of Brubeck’s craft, and those are the pieces Militello will focus on for the Lockport concert. Regardless of a song’s popularity, his natural tendency is to put his own stamp on the music, and to make it about much more than the notes on paper.

“The best thing you can do is to not preconceive how you’re going to do something. Every time you play, you’re looking for a better way to express the music,” Militello said. “With [Brubeck)], he never played ‘Take Five’ the same way twice. I decided that I was going to play that tune my own way as well, and as time went on, I morphed it into me playing it, and I laid it back a little and brought a different approach [compared to the famous recorded solo by Paul Desmond].”

Despite having played some of those tunes hundreds of times, Militello insists that they can still be fresh for a thinking player. “You can give a speech once and say those words. Then the second time, you have a better feel for the content. Then by the third time, you do better still because you’ll find better ways to express yourself within the speech. It’s the same thing with tunes that you’ve played for a long time.”

Militello feels a duty to take the mantel of presenting Brubeck’s music, done in a way he thinks the legendary pianist would have liked. You do gain an understanding of someone after working together for 30 years. Militello’s arrangements are very similar to Brubeck’s, lending a unique authenticity, but Militello allows room for his current bandmates—consummate professionals all—to grow into the songs. “When you write out the charts, you first get their interpretation of reading the notes, but after a time, you get their interpretation of the music, and once it gets looser, that’s when magic starts to happen with the tunes.”

Militello works to develop a rapport with the audience, something he’s done since he started playing locally as a teenager. He said that the intimacy of the Taylor Theater should offer him a chance to really connect with the audience, which he says is “a conscious element of what good musicians do when they perform.”

It’s an important mindset for Militello, who consciously feels out the energy of the room when he is blowing. “I play with my eyes closed all the time, but I can feel whether they’re into me and what we’re doing or not. If I feel it, and if that feel is right, I can take them wherever I want to go and it’s going to groove.”

With 150 seats in a cozy U around the stage, the Taylor Theater is a great place to connect with the audience. Despite its versatility, it remains underutilized, according to Kathleen Rooney, who starred in Love Letters at the Taylor and produces the jazz series. She said the concert series was a “perfect storm,” noting the need for venues, the facility’s willingness to make better use of the theater, and Rooney’s past on Kenan’s board of directors and as a young actor and spectator, enjoying all kinds of performances in that theater.

Still, it took a happy accident to develop the concert series. When plans to use the space for a holiday play fell through, Rooney stayed committed to the holiday theme. She reached out to Bucheger as a jazz musician she’d seen perform, and someone who might adapt songs of the season to his musical style. That idea led to two well-received “Tidings of Comfort and Jazz” concerts late last year. Soon thereafter, the 2017 jazz series was born.

This week’s concert in Lockport is one of several summer bookings for Militello and his quartet, including being part of the Olcott Beach Jazz Trail on July 23. But the program for the Taylor Theater will have a more defined musical focus, and there is the added opportunity to strengthen the venue’s jazz credibility. Rooney has worked with Mark Filsinger, a local trumpeter and educator who heads up the Buffalo Jazz Collective, in programming the series, and they also agree that expanding into new facilities and communities is very important to the growth of the music and an audience.

Through Filsinger, the Buffalo Jazz Collective creates varying ensembles from within its member players to perform at a variety of locales. They have gotten into the Buffalo History Museum, MusicalFare Theatre, Flying Bison Brewery, and now the Kenan Center, handling this upcoming concert and two more—a 100th birthday tribute to Buffalo’s own legendary songwriter Harold Arlen by the Buffalo Jazztet on November 4, and a special holiday show on December 2. Filsinger is working to build a jazz listener’s culture in the area again, with these concerts being important to aficionados, families, or anybody seeking something different.

“When I was younger, there were more internationally known jazz artists and groups coming to Buffalo, with the Calumet Arts Cafe, and the chances to check all of those people out were really memorable moments for me,” Filsinger said. Militello, among others in the collective, is on that world-class level of musicianship, so the hope is that his presence will open even more doors to the music, literally and figuratively.

Filsinger said the planning of concerts and series is complicated, once you consider the venues, the different audiences in different places, finding the right mix of players and themes, and on and on. To keep his perspective fresh, he seeks input from fellow musical directors in the collective, including Militello, versatile pianist/composer George Caldwell, and John Hasselback Jr., whose trombone has been a mainstay of the scene for decades. They discuss the details for each booking that the Collective secures.

“We get to hear a lot of music when we’re planning, and we get to think of how things might fit upcoming gigs,” Filsinger said. “So it’s also a lot of fun.”

For future musical programs at the Taylor Theater, Rooney said that there are all kinds of styles and sub-genres of music that would work well in the space. But for now, it’s jazz, and she is excited to welcome Militello to the space.

For the local jazz fans who say that they can never find anything good to see, or that they don’t want to go “all the way downtown,” or whatever other excuse offered for not checking out the great array of Western New York talent to be heard on a regular basis, catch “Bobby Plays Brubeck—and More” on June 23. It will be a great start on the path to some amazing music.