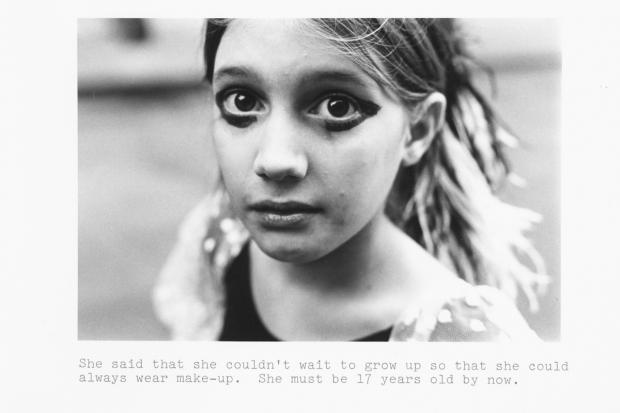 Participants in a symposium on the photography of Marion Faller in connection with a major show of her work currently at CEPA talked at length about how difficult it is to put a label on the work.

Filmmaker Lorna Lentini allowed it was documentary, but emphasized how with Faller “you get an extraordinary sense also of the documentarian, the artist doing the documentary. A sense of what’s different about Marion” from other photographers.

Whereas, “I don’t really think of it as documentary,” artist and exhibit curator David Mitchell offered. “But almost a jumping-off point for conceptual art. Or performance art.”

They talked about Faller’s Hey, Baby series. As a relatively novice photographer, strolling about New York City with her camera, looking for interesting subject matter to photograph—she has a series on Lower East Side kids in Halloween costumes—men she encountered along the way would frequently yell out to her, “Hey, baby, take my picture.” Seemingly—as it would often prove—less interested in having their picture taken than in making a casual—and possibly precarious for the young woman photographer—personal connection. A bit of sexist harassment, would be one way of putting it. Whereupon she would surprise them by complying, readily offering to take their picture. Their bluff called, many of the men would decline the offer. But some did pose for pictures, a score or so of which are included in the exhibit. Looks and attitudes ranging from credibly benign to awkward to affected macho.

“My idea about documentary, it’s as much about the photographer as the subject,” Georgiou put in, expanding on his original statement.

But for all that her photography is largely and variously of a documentary nature, that label seems finally inadequate. “Some of her photos in our collection are about light and shadow,” Burchfield Penney curator Nancy Weekly said. (Weekly curated a Burchfield Penney show of Faller’s photos a year or two ago.)

Maybe photographer anthropologist would be a more precise characterization. Much of what she documented related to social conventions and rituals, religious and secular. From trick-or-treating in monster costumes, to extravaganza front yard displays such as the Christmas flamingoes one, or one featuring an enormous Statue of Liberty, a huge Happy Birthday bear, multiple American flags amid flags of other nations and enterprises, and several toy trains pulling gondola cars full of miniature flags on poles stuck upright in Styrofoam cargo blocks, to a series entitled Rites of Passage, a collaborative project with spouse multifarious artist Hollis Frampton, consisting of multiple photos of a white wedding cake, each with different cake apex figurines or the like ornamentation, symbolizing different life stages or events, from birth to death, such as school, graduation, first car, marriage, babies, work, retirement.

Her practice was to knock on doors and ask people if she could photograph something of theirs she saw of interest, such as the garish yard displays, or a series she did during a rural upstate New York sojourn—she taught at Colgate University for a while—of deer carcasses hanging from tree branches—always in front yards—prior to butchering and processing. People usually welcomed her interest, and invited her into their homes, where she sometimes found and photographed other interesting subject matter. One photo is of a Vietnamese refugee family’s ancestor altar.

Or maybe she didn’t want any label. That is, other than photographer, artist.

She worked during the initial period of feminist consciousness-raising, but she was in no sense an ardent or militant feminist, and seems to have eschewed even the category female artist, declining to participate in exclusively female artist exhibitions when such were first organized after centuries or millennia of art world semi-official unawareness of the existence of women in the arts. (Nancy Weekly pointed out that the standard college art history course textbook of the latter half of the twentieth century—H.W. Janson—572 pages covering artworks and artists from the Stone Age to Jackson Pollock—lists not one woman artist.)

She did not ignore feminist issues, however. As implicit in the Hey, Baby series. Explicit in an appropriation art series—mostly advertisements from magazines, for merchandise ranging from feminine hair products to Scotch whiskey—about women photographers, but mainly about legs.

Occasionally she collaborated on projects with Frampton, the most famous of these the brilliant hilarious “Vegetation Locomotion” take-off series on photography and movie art pioneer Eadweard Muybridge’s rapid-photo-sequence documentations of human and animal movement. On which collaborations she tended to get secondary billing. Unfairly, on evidence of the current exhibit. Which includes a number of photos from her comical (non-collaborative) Zucchini Variations series, dated 1973 to 1975, surely a prelude and inspirational series to the Vegetation Locomotion series, dated 1975 (in the Burchfield Penney exhibit, which included multiple Vegetation Locomotion examples; there is just one in the present exhibit, in a vitrine, undated).

The exhibit is called The Unseen Marion Faller. It continues through July 8.