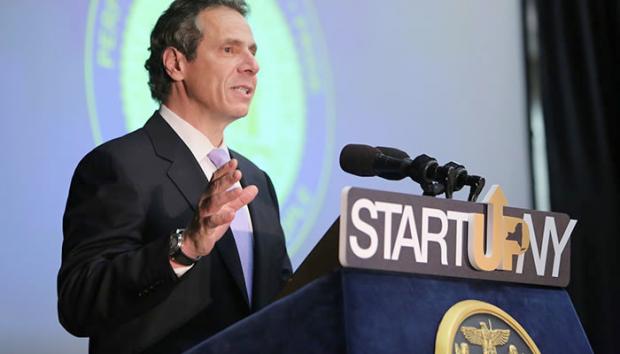 When Cuomo announced Start-Up NY in 2013, he claimed more than 2,000 jobs would be created in the first five years. But the program has drawn widespread criticism in recent weeks from pundits and politicians on both sides of the aisle, after it was revealed that only 76 jobs have been created in its first year. A scathing report released by state Comptroller Tom DiNapoli’s office in May found that the state spent $211 million on an advertising contract to promote Start-Up NY and other ecopnomic development programs; $53 million of that contract was spent directly on Start-Up NY.

Start-Up NY’s Executive Vice President Leslie Whatley shrugged off such criticism at the gathering in Buffalo, saying that critics were not looking at the program’s long-term potential.

“I think this program, it is unique to the country,” Whatley said. “It is new, it is innovative and people don’t understand it. But it has the elements, again, that are all about creating a sustainable economic recovery.”

Whatley, who has been traveling around New York to promote the program since early May, said the slow start can be attributed to the effort it has taken to implement the program and educate everyone involved on how it works.

“What we are really trying to do, and what we’ve done in the first year of this program, is put the building blocks in place to create this and make it sustainable for the long term,” she said.

Whatley, who was the global head of corporate real estate for Morgan Stanley before taking the job with the state, said New York also faces the challenge of shedding its image as a hostile business environment. Policy changes like the property tax cap are a start, she said, but the Cuomo administration must also inform the public about those changes and programs like Start-Up NY in order to change the perception that New York is bad for business.

Whatley called the marketing campaign “phenomenal,” claiming it drove significant interest to the program and others like it in the state.

The University at Buffalo has had the most success attracting investment in the program, accounting for 48 of the companies involved, or more than a third of the total. Those companies have promised to hire more than 1,500 people in the next five years.

Orsi said that the university can act as a hub for economic development growth, providing regional businesses with talent, technology, faculty and other resources.

“They’re leveraging our intellectual capital, which is, again, mutually beneficial for the companies and for the University at Buffalo,” Orsi said.

Despite the state’s assurances that the program will be a success, both liberal and conservative groups have called for the program to be shut down.

As far as Whatley is concerned, Start-Up NY’s unquantifiable benefits—like raising New York’s profile as a destination for businesses by highlighting many of the innovative companies that are moving to or expanding in New York—should not be discounted.

And the tangible benefits will soon follow, she added.

“Economic development does not happen over night,” she said. “People in this day and age seem to want instant gratification.”

Justin Sondel is the Buffalo reporter for The Public’s content partner City & State.