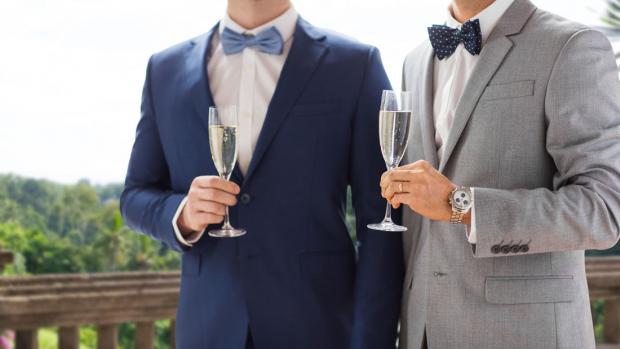 My mother was doing her best not to choke as she attempted to swallow my big news along with some of her favorite takeout tuna. “Well, um…congratulations…” And then after a pause, in a lower voice, “Are you sure this is what you want?”

It was late 1993 and I sure as hell thought so. Faced with our mutual dysfunctions, my boyfriend and I—12 years apart—had convinced ourselves that marriage would right all the wrongs in our relationship. Fail.

A few months after that fateful phone call home, Greg and I got married in front of about 50 guests at our Boston duplex. We hired a caterer. A retired Episcopalian priest oversaw the ceremony. We went for counseling from the co-rectors at the church he favored. At one point they’d told us in their faux-progressive voice that we’d be welcome to have the ceremony at their Cambridge church if the parish didn’t object. But when the husband announced his intention to run for bishop in the upcoming election, that offer was suddenly off the table. Never one to enjoy being told what he could and couldn’t do, this only fueled my ex’s determination to tie the knot.

As the Supreme Court drags its sagging ass to the finish line with a definitive decision about that fate of gay marriage in this country, we need to honestly examine our motivations: Why is this so goddamn important to us? I suspect there are plenty of folks out there today blindly adding their voices to the collective din without really looking deep within themselves to understand why the idea of getting married makes them tick.

Mind you, all I’d really wanted from Greg was a monogamous commitment. Sure, getting married was one way of handling that; the truth was that he was already striving to remain faithful. But that wasn’t enough for me. Why? Because I knew that gay monogamy had an unusually short shelf-life. See, I’d been raised with this “forever ideal” about romance just like most everyone else—you shopped around and found someone you thought was worthy of sticking it out. You loved them enough to compromise over personal differences. You’d fight it out until you worked it out. Plenty of my friends had parents who got divorced, but in my mind that was because they hadn’t tried hard enough.

Shortly after arriving in Boston, however, my idealistic romantic bubble had been popped with a big, pointy phallus.

Moving to the city after college, I saw how gays at large behaved. I was soon taught that this notion of “forever” was nothing more than a delusional heterosexual construction, and that we were free to exist outside that narrow standard. It was confusing. And it definitely didn’t jibe with the way I was raised. At the time, I failed to see the glory in it. But this was the reality of gay life, so I was told, and 20-plus years later, I still know it to be true. So, when I met someone I really liked and wanted to stay with for a while, panic set in—how do I keep him? The norm said I probably couldn’t. He responded by making this grandiose gesture of marriage in front of me, his god, and a few dozen guests, apparently thinking that by doing so he stood a greater chance of actually following through. In my hysteria, I bought into it. I wanted very much to believe it too.

My mom ended up not coming to the wedding. She’s always hated traveling, especially alone, and my dad seemed less than enthused, which neither surprised nor particularly bothered me. She decided to spend the travel money on some British china in a pattern my grandmother had owned that I’d loved as a little kid. It was a sweet gesture, and she’d probably have had a lousy time anyway. It was boring. Which isn’t surprising: Weddings are boring.

They’re also expensive and stressful. You invite the people closest to you to attend your wedding, thus forcing them to save-the-freakin’-date with unprecedented fervor. Quite often there’s traveling involved, maybe even plane tickets and a hotel room. People are usually expected to get dressed up and dump money on a gift—more than they’d give for a birthday. And it’s not as if you’re going to spend any quality time with your guests during the event. That’s a fantasy.

Those are the annoying little details. Less distinct and harder to discuss are the bigger issues brought to light in our quest for legalized marriage. Younger gays seem to feel that gay marriage is the primary issue on their socio-political timeline, but the why and how of its importance remain evasive. Most will tell you it’s a civil/human rights issue, pure and simple, as if to say, “They can, so why can’t we?”

And since when, exactly, have we wanted so badly to be like heterosexuals? Is that what all this boils down to?

Even Margaret Cho gave me a hilariously over-the-top response during a telephone interview some years back that conveniently dodged the issue. Denying gays the right to marry was, she said, “just bringing the government one step closer to shoving us all in a work camp.”

Apparently, some of us have wanted to live like suburban straight couples for ages. If that’s your vision of fulfillment, your ‘happy place,’ by all means. But making traditional heterosexual marriage a potentially expected facet—a social norm—of gay life (don’t think it’ll happen? Just give it time) signifies a troubling lack of acceptance regarding our queer selves. And rather than working at that, (admittedly, a difficult, sometimes life-long journey), we’re busy shaving our edges down so we can more easily squish ourselves into a widely accepted conceptual box. There’s no glory in that, folks.

Marriage is a mirage of safety. It says you’ve navigated the harsh waters of hooking up, dating, loving, and all the in betweens. Finally emerging victorious on the opposite bank, you’ve found “the one.” Young gays now daydream of this righteous sunset ride, leaving their less fortunate friends in a cloud of barroom sawdust as they gallop toward a white picket fence and two cars in the garage. Apparently, the only thing more boring than the wedding is the happily ever after that supposedly follows.

Parents that bristled upon discovering their child is homosexual are given a safe, familiar ideal to cling to as well: marriage makes the sexuality more palatable. I know there was an element of relief in my mother’s acquiescence since, in the wake of AIDS, I was off the market. In the end, her big exhale was unfounded since I was marrying a man with HIV, but that’s not something I disclosed to her until well after we’d split up.

Gays have never been great at monogamy. True, many heterosexuals struggle with it as well—it’s safe to say that human sexuality has a strong impulsive component regardless of what turns you on. But because we never before have sought to define our romantic liaisons on the same grand scale as heterosexuals do, we were let to live more akin to the way we’re naturally wired, drifting in and out of relationships that meant different things to us at different times. It’s a much more fluid sexual existence than traditional marriage allows.

For some, there are long term love affairs that define huge chunks of our lives, and that’s fantastic. My underwhelmed stance about same-sex marriage isn’t meant to imply that gays aren’t capable of long, loving romances. But especially for young gays, it now seems like this is the only type of relationship they imagine. Everything else is just hooking up. Rather than letting situations naturally progress (or not), all non-platonic interactions must be mentally categorized—are we dating or just screwing around? We’ve lost the grey areas that once made our collective lifestyle edgier, more exciting and—let us not forget—instilled jealousy in many of our tied-down straight friends. Gay dating will now, more than ever, be fraught with the looming question: is this “the one”?

Whereas we once ferociously sought to define our individualism, we now pine for completion from another. This is dangerously codependent. Granted, yearning for companionship is totally human and normal. But we’re now courting a hetero-normative method of pinning someone down and I can’t help but think that some are hoping it will cure them of their natural proclivities for anonymous sex and multiple partners. We’ve long enjoyed these freedoms, and while for some of us there’s palpable excitement at the prospect binding someone to us in legal terms…that’s another fantasy. Marriage is a contract, but it’s no guarantee. Good luck with all that.

Greg and I both cheated. The breakup was long and ugly. Eventually a friendship emerged, and hindsight says a low-key sexual friendship might have been the better route for us all along, but there’s no going back. I shudder to think just how much worse it would’ve been as a legally married couple with cars, bank accounts, mutually-owned property, and even (gulp) children to consider. After all, with the process of legal marriage comes the processes of legal separation and divorce. You thought it sucked when your former partner took the dog? Just wait until you have to watch them zipping around town in that Mini Cooper you’re still paying off.

When I was a teen, my mom found some gay pornography in my room. Once confronted, I copped to being bisexual because I felt like it would be easier for her to take (and actually, it’s what I believed at the time). She told me she thought I was choosing a hard road…a sad and difficult way of life. She was obviously misinformed about the perceived choice (and now gets the difference), but seen through the eyes of a woman brought up on the aforementioned romantic fairytale of forever, I now understand her point. Because while we may aspire to monogamous partnerships, our behavior generally dictates otherwise. If your eyes are set on the ‘forever’ prize, the heartbreaking reality is that it’s out of reach for many of us. But when we were content not to marry, before all this hubbub started, we’d accepted that. We enjoyed our relationships for as long as they lasted, and sometimes they lasted for a long time. Now we’re all caught up in some hetero marriage status quo—and to what end?