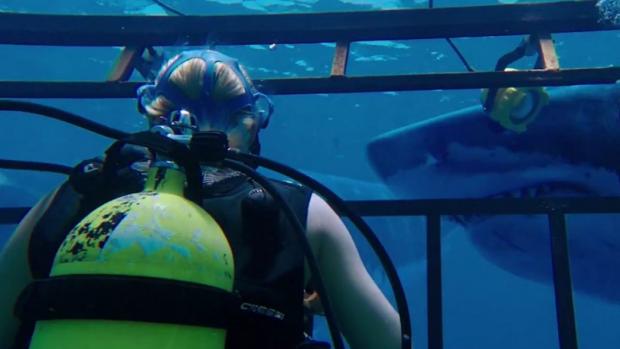 Robert Shaw’s query to Richard Dreyfuss in Jaws, the 1975 blockbuster that made shark movies a summer staple, sums up the premise of 47 Meters Down, the new nail-biter opening Friday. Mandy Moore and Claire Holt play two sisters vacationing in Mexico (really the Dominican Republic) coaxed by local romantic interests to descend into shark-infested waters in a protective cage just like the one that failed Dreyfuss.

The women spend the rest of the film on the ocean floor, trapped in the cage and surrounded by a school of Great Whites, waiting for their oxygen to run out. It’s primarily a two-character thriller, a souped-up version of Open Water that manages to be claustrophobic even in the expansive ocean. The dialogue lacks the bite of Spielberg’s classic, and is so shallow that whenever Matthew Modine (collecting a paycheck and a vacation) warns of some hypothetical danger, that scenario becomes fait accompli, but the direction and cinematography yield stunning visuals and the promised scares. Visual effects have come a long way since an uncooperative Bruce the shark forced Spielberg to fashion a more Hitchcockian thriller than he had planned, and these sharks are entirely convincing.

A film like this succeeds only if its audience is willing to go along with the increasingly preposterous situations the heroes face, and director Johannes Roberts, who co-wrote the screenplay with Ernest Riera, pushes all the right buttons.