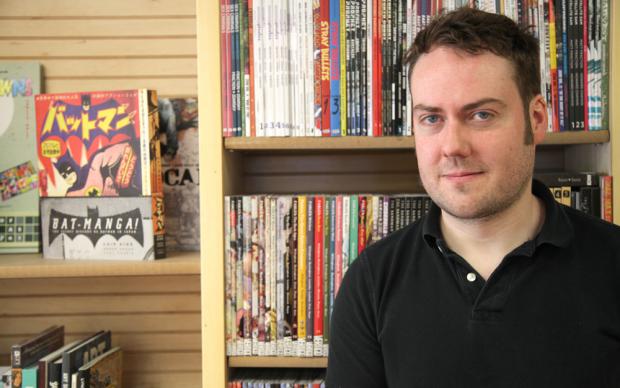 You’ve probably walked by this tiny storefront in the Elmwood Village a million times. It was once University Hots, then for a short period it was a vapor store, and then a cell phone store, and now maybe it has finally found its perfect use as the home of Gutter Pop Comics. The location, 1028 Elmwood Avenue, right on a major walking strip between Buffalo State and the meat of the Elmwood Village, is now painted white with a shade of pink and is ready to open its doors to the general public on June 18. “It’s been really encouraging so far. People have been knocking on the window asking when we’ll be open,” says 32-year-old Stephen Floyd, the proprietor of the business. Floyd, who moved to Buffalo from Atlanta in 2010, is also known in Buffalo as the man behind the small indie record label Drug Party Tapes and the indie comic publishing company One Percent Press. This week we talked to Floyd about his plan for the new comic book store, his favorite comics of all time, and why he still likes cassette tapes.

When did you decide you wanted to open a comic book shop? I’ve been doing a little small press company called One Percent Press for about 10 years, and it’s mostly like a slice-of-life comic book company. It’s all very understated stuff. For One Percent Press I’d travel and do comic book shows and then I started going to shows in Cleveland and Pittsburgh, and I noticed that there were comic book shops that weren’t just superhero-centric and it clicked in my head: Why can’t Buffalo have a shop like that? I love Talking Leaves, and they carry some really awesome stuff, but I felt like it would be really cool if there was a place in town that focused on the whole breadth of comics as a thing as opposed to either a niche thing like Talking Leaves or a mainstream thing like Queen City. I think the city is big enough to support a few comic book shops.

Why Buffalo? In 2007 I did an internship with a record label called Art of the Underground, run by Alex Kerns from Lemuria. So I spent a summer up here to try and learn how to put out records and comic books. I really liked it, and then in 2010 my partner at the time was looking for work, and kind of as a joke I said, “Ah well, I loved Buffalo, but there’s probably not any work there.” But the first place she applied she got the job. So I live on the West Side and I like it here a lot. Atlanta is a big, sprawling city but Buffalo I could get a handle on immediately. I started setting up basement DIY shows. There’s a really cool poetry scene here. There are a bunch of really cool, inspiring scenes. You can meet people really easily. Buffalo really helped me get a good handle on how to make stuff happen.

What does Gutter Pop refer to? That was a weird little journey. I was planning on doing a music zine called Gutter Pop, just sort of refering to my friends in the DIY scene that make kind of poppy music but it’s all underground, so I thought Gutter Pop was a fun play. And then I needed a name for the store and I thought it would be fun, because [in a comic book] in between the panels is called a gutter, and then the pop is like the pop of pop art.

What will the focus of Gutter Pop Comics be? I’m 32 so when I was a kid [comics were] all like white dude culture, that sort of thing. Now there are more and more people from different backgrounds doing all sorts of stuff because they have the opportunity to publish, too. One thing that’s really exciting now with all of the small press stuff is that there is a lot of queer-centric stuff. I’m trying to get a range of all of the different subcultures. I try and carry some classic cartoons; some of the original underground comics from the 1960s and 1970s. I grew up on comics like X Men, and as my tastes changes I noticed that my favorite moments were where they pulled back a little bit.

Tell me more about One Percent Press. I started it in 2005 with my best friend JP Coovert. We were just two 20-year-olds who met and we were, like, “Oh, our two favorite things are punk and comics.” I was making comics at the time and so was he, so we helped each other self-publish. We both had bands so we helped each other release those records. We still do it to this day. We do one or two books a year. It’s kind of hype-free. It occurred to me not too long ago that the stuff we publish loses its impact if it’s forced into someone’s face; they’re not boring but they’re not adventure comics. It’s more subtle, understated stuff, and a person needs to just be drawn to that kind of stuff.

You also run the Buffalo basement-punk record label Drug Party Tapes.  Drug Party Tapes, that was just sort of like, I wanted a fun project. The basement scene in Buffalo has been so important to me. We started it about five years ago. Daniel Carosa and Laura Sweat both helped get it going. It was a thing where it was clear that I couldn’t afford to put out records—it costs a lot of money to make an LP and a lot of the bands are only around for a year or two. So the idea was to do a free download label so that people from outside of Buffalo could hear it and take a chance on it for free. And now cassette stuff is just starting to come back—and I grew up on cassettes. I think it’s a format that’s got a charm to it, and we’re starting to do that. The other weird thing about doing the label is that there’s no real reason for me to do it. Like, any band can make a tape for $200 or put their stuff on Bandcamp, but I think what it does is, it’s like a little snapshot of like 25 bands from the past five years of Buffalo represented in that way. And then if people are interested they can look into the other bands and labels around here.

There must be a connection to you between punk music and comics. I’ve been trying to grapple with that my whole life because those two things hit me so hard, and I’ve kind of just been stuck with them my whole life. I read books with just words, and I watch movies and TV, but those two are the two that you can get together and make by yourself or with friends. I strongly believe that you don’t have to be able to draw to make a comic book. There are so many amazing comics that—I mean, Harvey Pekar is an inspiring example of a guy who couldn’t draw but made it work and made American Splendor, one of the greatest comic books of all time. So I think that’s what is inspiring to me about both things, that you can kind of just jump in.

What has been the biggest challenge so far? That’s just, like, me not knowing what I’m doing. The hardest part for me is having to admit that it’s going to be a lot of trial and error. As far as ordering stuff, I was really agonizing over it. Do I just order every Batman? What if nobody buys them? That’ll just come with running it—getting a sense of what people actually want or whatever. There’ll always be stuff that I’m always going to carry that I feel passionate about. There’s going to be an element of supply and demand. That’s caused of couple of sleepless nights, though, where I just wake up and I’m, like, “Wait, do people even want comic books? What am I doing? Is Amazon.com still a thing?” So maybe the biggest hurdle is just emotionally getting over that.