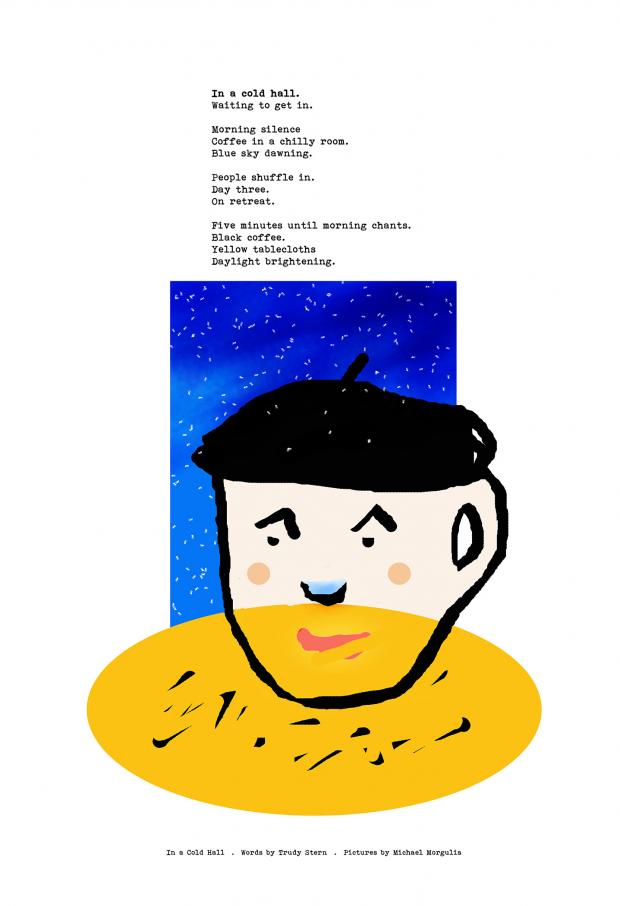 Recent collaborative works by artistic and marital partners Michael Morgulis—visual artist—and Trudy Stern—poet—are currently on view at the Western New York Book Arts Center. Recent work because, as the pair explains in a dialogue artists’ statement in an accompanying handout, forty or so years ago they used to collaborate, but found it difficult and abandoned the practice. Went their separate ways artistic ways. He making his visual images, she making her poems. So why attempt it again at this much later date? “Because now that we have spent forty years together, we’ve learned a few things about collaboration,” Stern says in the dialogue.

Computers—which of course weren’t in the picture 40 years ago—seem to have facilitated. Morgulis explains how in more recent times, while he’d be at work at his studio or gallery shop, Stern would send along a poem, maybe from her workplace as a nurse practitioner. He’d read the poem and “keep it on my desktop for as long as it takes for an image to appear on the blank page of the part of my brain that invents images and then, drawing on whatever design skills I’ve accumulated over the years, I transfer it to my computer to be turned into a print…Sometimes the magic works, and sometimes it doesn’t.”

An overview work consisting of a poem called “Scraps and Pieces” and very rough sketch depictions of the pair—each looking less than convinced of the wisdom of the collaborative process—explains more poignantly:

We fought about details.

Every crook and comma.

Every image and line.

That’s how we began

To build this funny life.

They grew, one died.

Not what I desired then.

What we got is now

Morgulis relates moreover that Stern “loves traveling as much as I don’t.” So many of the poems are in the form of actual or email postcards from distant lands. Several from Israel, several from what could be Buddhist retreats—Stern practices Shambhala Buddhism—in remote places and often seemingly Spartan conditions.

The accompanying images have an effectual children’s art look or otherwise playful computer manipulation and conglomeration of forms and colors character. Accompanying a poem about a fire drill, the image might be of a fireman, in a red uniform, and possibly dreadlocks. In conjunction with a poem called “Haifa,” about a mountaintop shrine “Where there is a lighthouse / Surrounded by barbed wire,” and some kind of holy fire, the visual suggests a mountain, belted with letter x’s for the barbed wire, and at the top, a reddish-yellow flame that looks like a bird until you read the poem.

Another piece is about a beloved Black Labrador from the pound that would shake hands and sit and lie down on command, but would not come when called or implored or even offered dog treats, not even to come in out of the cold, but would remain outside and look “as if / She is remembering a time or place / Where someone else first called.”

Also on display, some ostensibly non-collaborative images and text works by Morgulis solo, from his project in progress on the joys of bowling. The text segments this time from Google instructions on how to bowl. “Lightly edited,” Morgulis notes, with the result somehow that they read a little like instructions for a Buddhist ascetic exercise. (So indirectly collaborative with Stern, it would seem.)

“First, visualize the shot you are about to make…Breath in deeply through your nose and exhale through your mouth. You are now ready…Separate yourself from the bowling shot by thinking about something totally unrelated to bowling…”

The bowling works make regular reference to the Coen brothers’ film classic on the topic, The Big Lebowski. One of Morgulis’s images evokes the memorable scene in the movie where Walter and the Dude attempt to dispose of Donny’s ashes by throwing them over a cliff overlooking the ocean. When a sudden updraft gust of wind…

The Morgulis and Stern show continues through June 23.