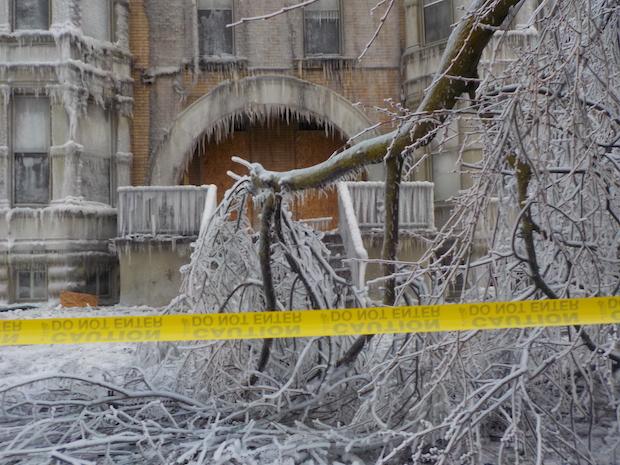 In March, 90 people were displaced after a fire was started in the early morning at the apartment complex at 117 Lafayette Avenue. Keanu Ares was one of the tenants. In the fire he lost everything, including his Coolpix point-and-shoot digital camera.

Over the course of the last school year he has been attending an after-school program at International Preparatory School at Grover located on the lower West Side of Buffalo. I-Prep is a fifth-through-12th-grade school with students from all over the city and all over the world. Its championship-grade soccer team was won renown not just for its accomplishments on the pitch but as an American melting-pot story where seemingly every athlete goes home to a different language being spoken.

Two days a week after school, starting in October, students involved would meet in art teacher Erin Kaminksi’s classroom to write poetry and learn photography. Students were given cameras to document their lives and learn the basics of photography as a tool for expression. During their meetings, students would spend an hour in writing exercises to produce poems and another hour taking pictures, then edit both and participate in teacher-led critiques. Approximately 20 high school-age students participated in the program at different parts of the year.

Educating Beyond the Borders of School is a  program in its second life, led by Dr. Craig Centrie, executive director for El Museo, an Allentown gallery dedicated to making space for underrepresented artists and communities. Teaching artists included Sherry Robbins, George Campos, Cheng Yang Lee, and program coordinator William Vogel. The overarching goal of the program is to provide an opportunity for students to share their worldview, to gain real life experience using art as a mode of communication, and to learn digital photography and real art studio-type modes of creative problem-solving.

Funded by a grant from the Community Foundation for Greater Buffalo, the program went so far as to provide snacks to the students in addition to printing costs, cameras for each participant (which in at the end of the program would become theirs), flash drives, compensation for all the teachers and artists involved, all the material tools needed to make a poem, and an exhibition to share their work with the community.

“We live in an increasingly diverse society, but recent events seem to suggest that intolerance is on the rise,” Centrie told The Public. ”A lot of this comes from a lack of multicultural awareness. While we can’t reach everyone, we hope to cultivate a group of ‘intercultural ambassadors’ that can spread the message of empathy, inclusion, and dialogue.”

A selection of photographs and poems made during the course of the program are currently on view at El Museo. The title of the exhibition is Where We’re At: Photos and Poetry by Young Artists.

The work hangs in El Museo’s gallery in a grid pattern: poem, then photograph, and so on. The photos are windows into the lives of people who might not have a voice at their age otherwise; the poems are an added layer of information helping viewers make connections between photographs and the stories they illustrate.“The photography and poetry class that was hosted at I-Prep was genuinely one of my favorite parts of the school year,” said Gabe Cohen, a participating student. ”It allowed me to embrace and explore a more artistic side of photography that I had previously paid no mind to.”

Cohen’s photograph shows 117 Lafayette Avenue after the devastating fire that has left the building just a facade of the original structure. In the foreground of the picture, you see yellow caution tape, beyond which are the layers of ice covering both the trees and what’s left of the building, with its doors boarded up. The story unfolds in the ice, how the water froze in place indiscriminately after being sprayed by fire hoses.  Cohen took the photograph for his friend Keanu Ares after he lost his camera and his home to the fire. This gesture seems to capture the goal of the project—a completely honest gesture toward another.

“The growth I’ve seen from my students is inspiring. They became so much more aware of their voice through this experience,” Kaminski said, who added that Ares didn’t want to tell her that he lost his camera in the fire. “The inspiring environment that the teaching artists created allowed this program to succeed. Students instantly felt validated and empowered to showcase just what is special about daily life.”

Where We’re At: Photos and Poetry by Young Artists will be on view through June 24.