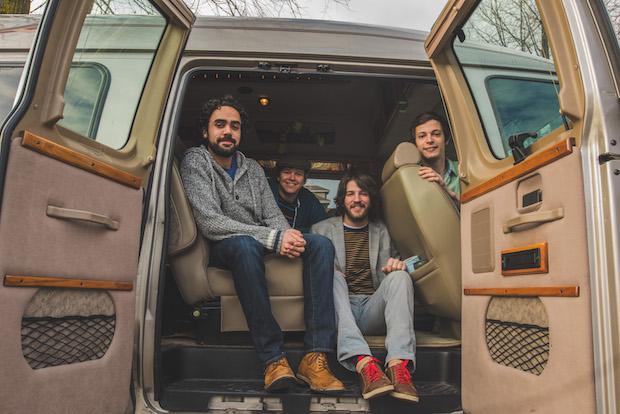 Carved out of the woods next to a creek there’s a hidden field in Alden where for the last few years an underground music festival has gone on. At first, the festival featured several bands, all paying tribute to the Grateful Dead. It was appropriately titled Dead Fest. But in recent years the festival has morphed into something else. The focus has shifted to another band, not quite as well known as the Grateful Dead, but deservedly gaining a higher profile in Western New York. The band, Intrepid Travelers—the name, a reference to one of Ken Kesey’s Merry Pranksters—has taken over the yearly festival, now called IT fest. They’re the sole band on the bill for what is now a two day festival. Over the course of the two days, the band plays six sets—around 8 hours of music. And they’re proud to say that there are not any repeats.

At the festival site on this cloudless, sunny day are RVs, tents, and a small hill with a white tent-covered stage at the top. Along the perimeter of the festival are vendors selling jewelry and nitro brew coffee—cold brewed coffee infused with nitrogen gas and served from a keg, giving it the frothiness of a beer like Guinness—among other items. Behind the vendors is a small village of campers hula hooping and drinking beers by the creek. The largest tent belongs to the Psychedelic Society of Western New York. The organization was invited to the festival to set up a comfort zone or safe space for the resident psychedelic travelers, or even the soberites who just want to chill.

I’m greeted by Intrepid Travelrs bassist David Neimanis, who quickly disappears to find the band’s unofficial fifth member, Tyler Dieckman, who runs sound for the band and has been fairly instrumental in setting up the festival. As we wait, a didgeridoo-playing attendee of the festival walks up to offer us some slices of “green peppers,” which turn out to be jalepeno peppers. I partake, and the fairly intense heat of the pepper alters my state of mind ever so slightly. Hopped up on heat, and with the whole band present—Neimanis, keyboard player Donny Frauenhofer, guitarist Brian Calisto, drummer Jon Fohl, and sound engineer, Dieckman—we chat about the band, the festival built for them, and their upcoming record, titled Everyday is Your Birthday.

The festival in its current form came together partly out of opportunity and partly out of a want to simplify the previous iteration of the festival. With only one band playing the entire festival, there’s very little management required; there’s only a need to set up one band’s equipment and only one band gets paid, so there’s little overhead and messy financial dealings. Dieckman works for a company that provides party tents, which also cuts down on overhead. But finding the right band for such a festival was the challenge. Not all bands have a repertoire that can cover six sets. A jam band like the Intrepid Travelers are ideal because the nature of their music lends itself to extended improvisational jams that can last for quite a while. Plus, the repertoire of Travelers is pretty diverse; an early afternoon set might consist of some laid back, chill tunes, while their night time set gets a bit wilder, with groovy crescendoing jams.

Josh Skowronski is the governor of the festival grounds—private property in Alden, which his family owns. “I’ve always wanted to have a festival that features original music, so I was like, let’s do it here, and let’s do it with this band. They’ve amassed quite a following. It’s cool because they have that jam band vibe, but they have the funk in there like Herbie Hancock, and kind of a proggy vibe to them too.”

Next to the side of the stage, there’s a large wooden IT sculpture set up. The band plans to burn it at the end of the night.

“It’s not the most original idea,” says Neimanis. “Last year a few drunk people here wouldn’t stop yelling ‘burn it down,’ so this year, we’re going to give the people what they want and burn it down.”

The guys have a variety of day jobs, a sales rep for construction equipment, a delivery guy for Grub Hub, a job at the Albright Knox, and one of them, Frauenhofer, is a full time musician.

Their favorite beverages range from vodka and iced tea, to a strong IPA. They also expound upon the importance of water. And coffee.

Though we’re in the rural outskirts of Alden today, all of the band members live in Buffalo, and three of them share a house in the Elmwood Village.

The guys, all in their mid 20s, met in high school. “We went to different colleges but always kinda knew that we were interested in playing together afterwards. It was always this thing in our head,” says Fohl.

The band formed gradually over time. The foundation of the band formed in a basement in Fredonia, where a few of the members would jam together. At the same time, Fohl and Neimanis left to study aboard in Italy, where they played together in a band, doing covers of the Ramones and the Strokes for American students. As they were all graduating from college, Frauenhofer and Calisto contacted Fohl and Neimanis and basically said it’s time to start a band; and that’s what they did four years ago, in the summer of 2013.

The Intrepid Travelers are a band built for the live stage, able to seamlessly improvise with each other. Surprisingly, the project started off as a recording project. They immediately recorded one or two songs, which they never performed live. They quickly realized, however, that the cornerstone of the band would be live music, especially improvisation.

“There’s no such thing as a fuck up,” says Fohl. “Sometimes a giant mistake turns into an opportunity. Maybe we missed a change, so we’ll just start improvising,” he says about the band’s live performance philosophy.

Their set lists, if you can call them that, are much of the time improvised rather than planned out ahead of time. They’ve even on occasion spontaneously broken out into a song that they’ve never played together before—in that case, generally something by Phish, a band that’s a pretty big inspiration for them.

“It’s their ability to create unique live shows, never playing the same show more than once. And also the whole creating a community around their music,” says Neimanis about Phish’s influence on the band. The Intrepid Travelers have done a good job on that end, as is evidenced by IT Fest.

Though they’re all trained musicians, they don’t take themselves too seriously. Their knowledge of musical theory is counterbalanced by their sense of humor.

“Although I’d like to do this, we’ve never really sat down and said, ‘let’s write an album.’ Anything we’ve come out with have been songs that we already have and have packaged together—and it’s like a snapshot of where we are in time,” says Calisto.

Their new album, Everyday is Your Birthday, was built in just this way. Many of the songs on the record have been marinating in their live set for years, which made it easy to cook them to perfection in the recording studio. Highlights from the six track EP include the psychedelic yet chill opening track, “Destinesia,” the more driving, peaking, “Funnel,” and the zig zagging, jazzy 10 minute finale, “Woolify.”

The band will release that record at their next show, at Buffalo Iron Works on Thursday, June 29.

After that, the next festival they’ll play will be pretty different than the rural IT Fest. Instead, it’ll be in Buffalo’s Cobblestone District, where the band will play as one of the featured local acts at the Cobblestone Live! Festival, alongside national acts like Real Estate, and hometown favorites Aqueous.

“I’m so excited that we’re finally going to have a music festival in the city of Buffalo, it needs to happen so bad,” says Neimanis.

Their manager, CJ Cook, who is also one of the main organizers of Cobblestone Live! has helped the band book some tours, including a tour of the Rust Belt, some Mid West dates, and a Northeast tour in 2015. They followed that up by doing some dates out in Colorado, Wyoming, and Montana.

The band is also gearing up for their next tour, which will take them all around the Northeast. The first leg of the tour begins with their EP release show at Ironworks, and ends with their slot at Cobblestone Live!

As we wrap up the interview, the magical digeridoo player returns for an impromptu solo. The band members take this as a cue to take the stage, where they jam out deep into the night, eventually burning their IT effgy to the ground.