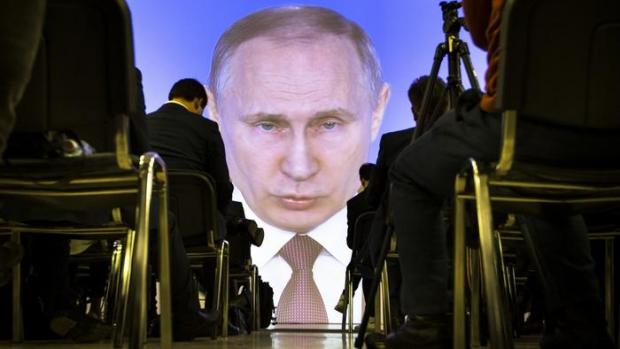 The gist of Tim Snyder’s new book is this: Vladimir Putin is running us. One wishes that Tim Snyder’s new The Road to Unfreedom were shorter, or at least that it had a 20-page executive summary up front so that wonks and intellectuals could go spelunking in his vast cavern of sources, but the whole presentation is an aide to clarity.

We Americans have never seen anything like this before.

As any rational person by now knows, Donald Trump is a relentless, effective, utterly amoral actor who has done and will do any deal with anyone that benefits him—mobsters, Russian spies and oligarchs, Chinese kleptocrats, Arab oil sheikhs—and he imagines that he is in the driver’s seat.

What Tim Snyder’s study shows is that Trump has no clue that he has been steered to implement another guy’s plan.

Because Tim Snyder reads the Russian-language sources that have been spelling it all out for the last decade, and because he both watched and reported on the huge change that Putin undertook when the Russians went to war with neighboring Ukraine, when they invested in right-wing politics in Europe, when they used social media and advertising in both the Scottish independence referendum and in the Brexit referendum in 2016, Snyder is able to show in great detail that the 2016 US presidential campaign was very far from the first Russian political disruption operation.

The KGB operative Vladimir Putin has invested in Trump, has had his guys pay Trump’s guys—including former Trump campaign manager Paul Manafort, who is under indictment—and he has an extensive record of acting on his deep grudge against the West for having undermined the former Soviet Union. Putin embraces a fascist ideology that has explicit contempt for liberal democracy, that has explicit anti-Semitism at its core, and he has actively and effectively worked with right-wingers all over Europe and the US to undermine the European Union and the trans-Atlantic alliance by backing Viktor Orban in Hungary, Marine Le Pen in France, the Brexit crew in the UK, and Donald Trump in the USA.

In short, what Snyder shows is that the rise of the populist Right is not a naturally-occurring phenomenon in the US or anywhere else: it is a studied, planned program of investment by Putin and his friends, and it involves American political consultants, social media, fund-transfers to groups including the National Rifle Association, and business relationships with Donald Trump’s businesses, Donald Trump’s family members, and Donald Trump’s business associates, among many many others.

Should the Democrats flub the 2018 congressional elections, Putin’s political achievement will be near-complete.

Meanwhile, educated Americans are buying in

As statistician Nate Silver showed in his post-election analysis, there was significant support for Trump among suburban middle and upper-middle class voters who are not the liberals caricature of Trump’s base. Even though Silver now has Trump’s approval at around 41.5 percent, and disapproval at 52.7 percent, the “wealth effect” may amplify the very effective ongoing messaging that will help Trump’s Republican allies.

Here’s how a Democratic loss in 2018 will play out: Putin’s factotum, the sitting US President, will continue to win applause from his base and silence from Republicans as he defies the rule of law (special counsel Robert Mueller’s indictments), and as a result of Democratic failure, Trump will never face impeachment, and will proceed on the plan he announced in Quebec City last week: his plan to remove the United States from its leadership roles in trade and defense alliances (NATO, the World Trading Organization, the G-7, etc.).

How is this even possible?

Answer: Even if the Russians are not currently as directly invested in American social media and political messaging as 17 US intelligence agencies said they were in 2016, the messaging continues. And Democrats unwittingly go along: the popular, income-focused social democratic policy advocacies of Bernie Sanders ($15 minimum wage, universal Medicare, free public-college tuition) get scant coverage, while New York Mayor Bill De Blasio gets national attention for his plan to end merit-based admissions to Stuyvesant High School, which Asian New Yorkers (whose kids are the overwhelming majority of the student body) and the middle class generally see as an attack on cherished notions of fair play.

Thus the more prosperous educated are fast becoming Trump supporters. They don’t know or can’t acknowledge that they are responding to the tremendously well-coordinated messaging beamed directly at them via major media and social media, messaging that is reinforced in the echo-chambers of social clubs and of neighborhoods that have for decades been segregated by income, doubling down in what they “know.”

The less-prosperous educated, including those who work in universities or in government, are so shocked and distressed about the daily message-stream that they are withdrawing or shielding themselves from politics—from conversation, from reading or otherwise keeping up with the news, very possibly also from voting in November—or are expressing their shock and distress at the constant barrage of messaging by mirroring the stridency that confronts them with every presidential Tweet.

Mirroring the stridency is pure Newton’s Third Law of Thermodynamics. It’s also precisely what the Trump/Putin message team needs most as it inches toward 40 percent approval, and thus, in a heavily gerrymandered Congressional map, a renewed hold on the Congress.

It’s hard to explain to someone with an MD, a JD, or a PhD that s/he “believes” what s/he is being moved to believe by a bunch of clever manipulators.

The educated, whether prosperous or scrambling, are generally quite clueless about the techniques used to manipulate their political views—because people are busy making a living, raising families, or tending to elders, or all three, and because they don’t run campaigns for a living.

For them, one wishes that Snyder’s book had a 40-page executive summary that left the other 300 pages of analysis, footnotes, and bibliography to those with more time.

Should the Democrats flub the 2018 midterm elections, blame the sense of prosperity that the practice of stock-share buybacks has created by pushing the prices of shares to historic highs. This “wealth effect” also involves rising real-estate values, but not rising wages, but no matter: As we’ve known for a long time, when the near-rich get happy about their stocks and their houses, they tend to conflate their interests with those of the genuinely rich.

The two electoral challenges that might thwart Putin/Trump in 2018 are the general and growing awareness that the Republicans have been far too nasty about healthcare, and the potential, unrealized since the 1992 “Year of the Woman,” that the Me Too movement might be meaningful. But if the Democrats can’t claw back support from educated voters, then look for the following consequences:

* To a much greater extent than is already the case, the plutocracy (and the about-to-be-born American version of the Russian criminal Oligarchy) will be utterly exempt from the rule of law;

* There will be no chance whatsoever of healthcare reform, while both Medicare and Social Security will continue to lurch toward a crisis that can easily be solved by lifting the cap on income subject to FICA tax, but that Republicans will never do;

* There will be an even more thorough reversal of the consumer and environmental protections that Americans have known since the 1970s;

* The looting of public education will kick into much higher gear because teachers’ unions will have been proven ineffective, and so will the Me Too movement (politically interconnected with teachers’ unions because they have so many educated women in their ranks);

* The table will have been set for local versions of what has overtaken Washington; and, not that it will matter much to the well-educated of a certain age,

* The USA will become a well-armed island full of angry white people with nobody to blame but the educated, which is already what Putin’s spin doctors are messaging with great vigor and precision.

What is also about to happen, should the Democrats lose in November, is a new vulnerability to a “black swan” event—such as the end of the US dollar as the international reserve currency.

But to the issue: Russian rules

Tim Snyder, the historian and linguist, explains how over the last decade, Vladimir Putin and his operatives have worked assiduously to keep themselves in power by learning from American political consultants, and then by engineering provocations and messaging to amplify their successes.

Some intellectuals have for years speculated that the “directed capitalism” of the Chinese or the Russian oligarchs is inevitable here.

It’s not like that, says Snyder. It’s a plan—a plan hatched by a Russian fascist a century ago, resurrected and tweaked by a Putin advisor, and recently set into motion by Putin’s team—and its friends including Paul Manafort and others now under indictment by Robert Mueller and all those members of grand juries who find his evidence credible.

Skip Snyder’s well-intentioned categories and stick to his reporting, even if the non-specialist’s eyes begin to glaze over at the complexities of European history.

What it comes down to is that Putin recognizes that Russia’s economy is not very big or very robust, that he’s not in charge of a Great Power like the former Soviet Union, but that he can neutralize the power of the USA, and bust up the European Union, by helping right-wing populists feed on resentments against arrogant financial, cultural, and political elites.

The elites are outraged at the rudeness of the populists, which is precisely part of their appeal—and because Democrats in the USA are as easily compromised as they are, undermining the USA is proving far easier than stealing France or Germany from the political moderates.

Snyder’s book is not alarmist, but both his evidence and his conclusions are alarming.

Tim Snyder was interviewed recently on an NPR talk show, amplifying his remarks on what the citizens of the USA need to do to combat Putin’s/Trump’s undermining of experts, science, law, all that sort of thing.

Local news in the USA is a dying industry even where, as in Buffalo, it is sustained by endless professional-sports commentary and lifestyle/soft news programming.

Despite Snyder’s hopes, the grim reality is that local news has seldom been effective in tackling corruption. Even with a $750 million bid-rigging case hanging over the head of a prominent local developer, the political economics of real-estate finance and development utterly dominate Buffalo…and every other American metro area, except those run by defense contractors, extractive industries (oil, gas, coal, timber, mining), or by finance itself.

That’s why there’s no actual Left opposition to Trump/Putin: all the opposition is coming from educated people who object to Trump’s style, especially to the provocative and upsetting nature of his messaging, a nature that is all artifice concocted by Roy Cohn, Roger Stone, and their Russian counterparts identified and described by Tim Snyder.

How do we cope?

Well, kids, it’s up to American voters to understand that there’s a war ahead.

The war is going to be over whether or not to abandon the idea that the President of the United States has to abide by the law.

Having run many campaigns, my best advice to Democrats is for 2018 is to focus on issues that the educated middle class is worried about, the cost of healthcare being the primary issue for the middle-aged, and the Republican threat to both Medicare and Social Security being the principal concern for the near-elderly and the elderly.

Stridency about identity politics, inclusion, race, the horrific treatment of asylum-seekers and of their minor children, or about Trump’s lawlessness won’t add a single voter to a Democratic column. Those voters are already there.