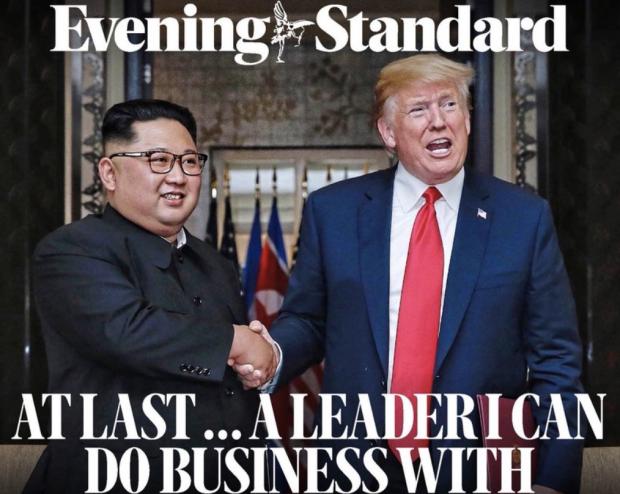 At an historic summit meeting, North Korean hereditary communist dictator Kim Jong Un won a massive concession, and in return, America got nothing. Not even a promise of future denuclearization; just some pablum while Trump called the military exercises we conduct with our South Korean allies “provocative”.

This whole affair is one giant concession to DPRK. A handshake between impoverished, brutal client state dynast tween and the leader of the free world against this backdrop is a coup for Kim. The USA and North Korea are not peers. pic.twitter.com/8Yh0u2ltet

The Singapore summit gave Donald Trump the pomp and circumstance he seemingly craves — far more so than what he experienced with America’s historic allies last weekend in Charlevoix, Quebec — but all of the show was a win for North Korea, which got everything, and in exchange gave up nothing. Trump claimed that the cost savings from halting the war games was some sort of “win”.

Kim gets to go home to his brainwashed and subjugated population and show them pictures of KIm and Trump together on the world stage — an elected president and a hereditary dictator treated as equally legitimate. Equals. When Nixon met Mao in 1972, they put the flags away. There’s no doubt that North Korea insisted on the bank of American and North Korean flags, and the Trump team acquiesced, apparently without realizing what a propaganda coup it was to put these symbols on equal footing. Equals.

I’m all for peace and diplomacy, but I’m not in favor of blind obsequience to regimes like Kim’s — not without some major concessions, anyway. For Kim, the meeting itself was the win — his father agitated for years to get a summit with an American President, and the closest he got was Bill Clinton in return for halting his nuclear ambitions. The meeting didn’t happen, and North Korea kept building nukes. Kim won by securing the meeting; Kim won through the symbolic framing of the imagery of the leaders from the summit; Kim won by getting a massive concession from the US in exchange for nothing.

I’ll withhold judgment until this whole process is played out, but I don’t get how this advances much at all, but certainly it doesn’t seem to be in line with “America First”. What it does is weaken an historic military and political alliance for free. I haven’t seen Trump’s “Art of the Deal” yet.