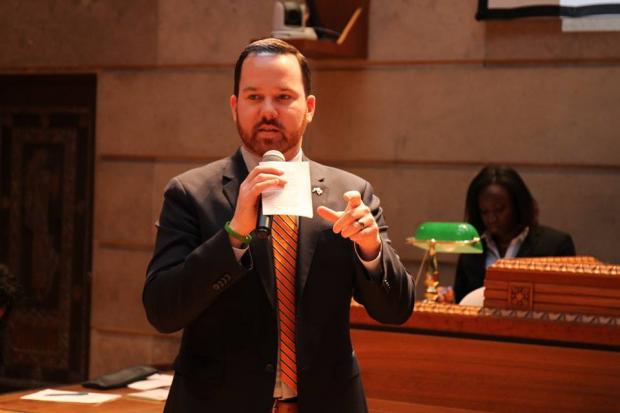 South District Common Councilman Chris Scanlon has supported Ellicott Development's proposed expansion of WNY Maritime Charter School, despite neighbors's concerns about scale and environmental impacts.
by
Art Giacalone
/ Jun. 13, 2018 1pm EST
Fact: On at least 16 occasions between August 2012 and February 2016, entities with the same address as the corporate headquarters of Carl P. Paladino’s Ellicott Development Company have made political contributions to “Friends of Christopher P. Scanlon.” The donations—from contributors with names such as Turning Albany Upside Down P.A.C., Seneca Street Properties, Ellicott Development, and 2468 Group, Inc.—have ranged from $100 to $500 apiece. William A. Paladino, the current CEO of the company founded by his father Carl, has also donated to Scanlon’s campaign. [See Scanlon contributions from Ellicott Development 2012-2016.]

Question: Do these political contributions explain why Christopher P. Scanlon, the South District representative on the City of Buffalo’s Common Council, has failed to publicly acknowledge or address the legitimate concerns of residents in South Buffalo’s Buffum Street area concerning Western New York Maritime Charter School’s plans for their tranquil, historic neighborhood?  [Full disclosure: I live less than 800 feet from the project site, and oppose the charter school’s proposal. See Giacalone Letter to Common Council re Special Use Permit 06-05-18.]

The elementary school site is encircled by residences—nearly all of which are one- and two-family homes. The residences immediately east of the school pre-date the 1915 construction of former School No. 70. The homes across the street from the project site on Buffum Street, and on Indian Orchard Place and Silverdale Place (one-block long dead-end streets) were built during or prior to the 1920s. The scale of the two-story elementary school building is in harmony with theneighboring residences.

In October 2016, Buffalo’s Common Council—including Mr. Scanlon—approved the sale of the then-vacant school building (along with vacant land to the rear of 102 Buffum Street) to an affiliate of Ellicott Development for $975,600. According to City of Buffalo documents, it was the developer’s intentions to renovate the property for an estimated $390,000, lease it to an existing charter school, and construct a new 45,000 sq. ft. building which would include a gym. No mention was made of a plan to construct a high school building at the site.

WNY Maritime Charter School began operating its “middle school” at 102 Buffum Street in September 2017. The middle school has approximately 81 students and 24 faculty members. Buffalo’s online property information website identifies the charter school as the current owner of the property, and also indicates that the facility is fully exempt from taxes as an education institution.

Current Proposal: On May 1, 2018, William Paladino, as CEO of Ellicott Development Company, submitted a packet to the City of Buffalo on behalf of its “client”—WNY Maritime Charter School. The October 2016 plan to construct “a new building including a gym (45,000 sq. ft.) and an athletic field” has transformed into a proposal “to construct a new 3-story classroom building” (64,913 sq. ft.) and “athletic facility addition” (24,050 sq. ft.) including “3 full size basketball courts.” [See Charter school Special Use Permit packet 05-10-18.]

Neighborhood concerns: Ellicott Development’s new proposal represents a significant increase in both the scale of development and the intensity of land use at the 102 Buffum Street site:

As expressed during a June 5, 2018 public hearing before the Common Council’s Legislation Committee (with Mr. Scanlon in attendance), the proposed Maritime charter school expansion threatens to adversely impact several aspects of the environment protected by the State Environmental Quality Review Act (SEQRA):

Impact on land: SEQRA’s  regulations expressly include “a substantial change in the intensity of use of land” as one of the “indicators of significant adverse impacts on the environment.” The stark contrasts between existing conditions at the site and the proposed addition of a high school building, athletic facility, and parking area reflect—in quantifiable terms—a substantial increase in both the scale of development and the intensity of use of the site.

Impact on traffic: Although the City Planning Board casually spoke of road capacity “adequate to service any increase in traffic,” Buffum Street is not Seneca Street or a busy commercial thoroughfare. To the contrary, 102 Buffum is located three blocks from Seneca, in the heart of a residential neighborhood, where t

he principal public street is only 20 feet wide, cars purposely park over the curb because of the narrowness of the thoroughfare, and two of the adjacent streets (Indian Orchard and Silverdale) are one-block long dead ends. Traveling on Buffum Street becomes more difficult, even treacherous, during the winter months. School buses—with only 81 students currently attending the school—already have a difficult time maneuvering around each other as they approach and depart the school. Note: The developer’s unsupported premise that 90% of the high school students will be using public transportation to get to and from the school seems unrealistic and self-serving. And, no consideration has been given to the capacity of either the on-site parking spaces, or adjacent residential streets, to safely handle added traffic when the Maritime high school functions as “home team” for its basketball and other varsity games.

Impact of existing neighborhood/community character: The above-noted substantial increase in the scale of development and the intensity of use of the site will also have a significant adverse impact on the existing character of the surrounding neighborhood of modest one-

and two-family residences. [See 6 NYCRR 617.2(l), 617.7(c)(1)(v).] Their scale and architectural features are in harmony with the two-story existing school building, and are incompatible with the size and sterile façade proposed for the three-story new classroom building. Additionally, the existing character of the surrounding residential neighborhood will be adversely impacted by the sheer number of students and faculty that would be coming to the site daily—estimated at a combined 525 individuals—starting at approximately 7:15am when the buses and autos begin to arrive.

Impact on historical, archeological, and aesthetic resources: The mature trees and green lawn east of the existing school building are a significant aesthetic resource to this neighborhood, enjoyed by the residents who live across the street from the school property, passers-by, and, presumably, the staff and students at the Maritime middle school. This important aesthetic resource—which took generations

to reach its current state—would be eliminated in-a-blink-of-an-eye if the proposed project is approved, replaced by a large, noise-producing, exhaust-creating parking lot.  Note: Although the Planning Board meekly attached as a condition to its site plan approval the following, “All mature trees must be saved where possible,” it is inconceivable that the developer would not claim that the vast majority of the majestic trees (with their extensive root systems) must be removed to ensure a safe, efficient movement of vehicles into and out of the new parking lot.   The project site is located within a couple hundred feet of the Seneca Indian Park, a site deemed sacred and part of a much larger area used historically as a burial ground by the Seneca Nation and others. Historians believe that in 1819 the first Seneca Mission house was built by Christian missionaries at the site of the former School No. 70—that is, the subject parcel. While the developer and the Planning Board acknowledge that the proposed action is in an “archeologically sensitive area,” a “Phase 1” archeological survey has not been conducted.

Scanlon’s response: The South District’s Common Council member sat passively throughout the comments made by the public on June 5, showing neither interest, nor concern. But Mr. Scanlon made certain that he expressed support, on the record, for Ellicott Development’s proposed project at the close of the hearing. As reported by WBFO:

“… South Buffalo Common Councilmember Chris Scanlon says the project would be a good addition, especially saving the long-closed School 70. ‘If it continued that way, it would eventually have fallen into a state of disrepair,’ says Scanlon. ‘Here we have a[n] entity, a school, which has a wonderful reputation, which is bringing life back to that building and which will inject the South Buffalo community with a couple hundred bodies each and every day, and they’re further investing between $10-$15 million in that location, which will further revitalize the Seneca Street Corridor.’”

Scanlon’s comments ignore several relevant facts. The presence of the middle school students and faculty has already brought “life back to that building”—life commensurate with the scale of both the century-old building and surrounding residential neighborhood. The building was not in significant disrepair when purchased by the Maritime school, and would almost certainly have been an attractive target for conversion into apartments or condominiums given the current momentum by developers to breathe life into Seneca Street. Also, whatever purported benefit “a couple hundred bodies each and every day” would have on the broader South Buffalo community, it is disingenuous, at best, to imply that attracting over 500 individuals a day, every day, would improve the quality of life for the human beings—homeowners and renters—who call the adjacent streets “home.”

One last point needs to be made. Scanlon not only ignored the concerns of his constituents who will bear the burden of placing a high school in their midst, he disregarded the questionable process used by his political contributors—I mean—Ellicott Development, and its client, WNY Maritime Charter School:

It appears to me that Councilmember Scanlon is more interested in protecting the interests of the developer (who also happens to be an early and faithful campaign contributor), than preserving the quality of life and existing character and historical significance of the surrounding residential neighborhood.