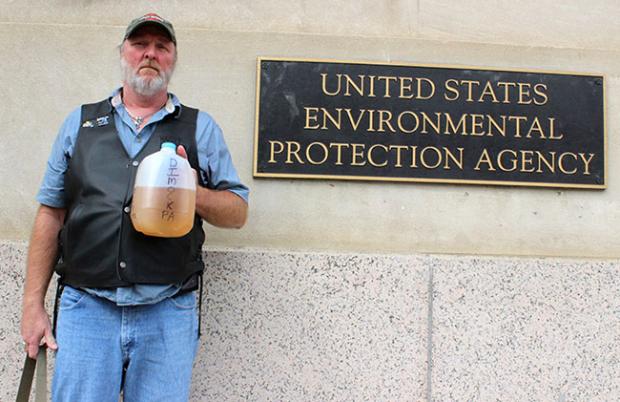 Dimock, Pennsylvania resident Ray Kemble holds a jug of discolored water from his well, contaminated by nearby fracking operations while standing outside of the U.S. EPA building in Washington, DC. Photo credit: Food & Water Watch
by
Jay Burney
/ Jun. 12, 2015 11am EST

You may have read or heard the headlines last week: “New EPA Report Finds that Fracking does not Contaminate Drinking Water.” These headlines are a part of the spin that the oil and gas industry wanted you to hear and that most of the main stream media outlets carried, you know, to “inform” you. Of course the headline on the EPA Press Release helped to enable these miscreants by touting “…fracturing activities have not led to widespread systematic impact to drinking water resources.”  These press pelease headlines are brought to you by the same Agency that while purporting to protect human health have legalized pollution including unbridled chemical releases, and by allowing the use of our waters as dumps. It is important to know that this study and its release is more about opinion making than it is about science.

The headlines are both misleading and damnable. Much of the media seems to either support or turn a blind eye on the realities of contamination and pollution under our accepted energy development and economic growth strategies. This follows us into our conversations and activities.  It helps to inform our habits. For years Oil and Gas industry spokespeople and spinners and opinion makers have pushed out the industry talking points that “there has never been one proven case of water contamination by the fracking process known as high-volume horizontal hydrologic fracking.”

The real news beyond the deceptively simplistic headlines is that this long awaited study overthrows that aggressively shouted carnival bark by the public relations emoticon robots in and out of the newsrooms and boardrooms. It does in fact reveal that fracking contaminates groundwater. It shows that pollution of water due to fracking  has occurred across the continent. The study identifies specific cases and explores vulnerabilities to drinking water resources. It identifies that 25 to 36 percent of water wells in northeastern Pennsylvania are contaminated by fracking operations.

This study takes a look at the fracking process water lifecycle including water used in wells, chemical mixing at the wells, injection of fluids, and the collection and disposal of wastewater. At least it has that going for it. It could lay the groundwork for better science.

The new report reverses the findings of a 2004 report that found no risk is posed to groundwater by the technologies involved with fracking. This is news.

However and fundamentally the new EPA study is weak. It is narrowly focused and reflects extreme pressures put on the agency by Oil and Gas industry lobbies. This is how these things work. Lobbies lobby, and reports get issued and publicized according to where the money comes from. The weakness in this report includes such things as the design of the study and the theoretical modeling by consultants related to the oil and gas industry instead of allowing direct gathering of data and monitoring of real field operations. But it does reveal the secret that there has been a fair amount of water contamination linked to fracking practices and lists concrete examples. Whether or not it is widespread is a issue of context and definition.

According to this article by anti-fracking activists Josh Fox and Lee Ziesche published at EcoWatch, “Our Map, (posted in the article and which shows a dataset of 969 Determination Letters issued by the PA DEP) shows widespread, systematic contamination.” The article states that if the EPA is looking for proof of “widespread contamination” they only have to look at the industries own data that shows that 5 percent of all fracking wells leak upon drilling and that that number grows as the wells grow older.

According to an article, published in the Pulitzer Prize winning Inside Climate News, “the EPA has been unable to collect the data it needs from the multibillion-dollar oil and gas sector, which has stymied a five-year federal study.”

Geoffry Thyne, a geochemist and member of the EPA’s 2011 Science Advisory Board wrote inthis article  that “This was supposed to be the gold standard. But they went through a long bureaucratic process of trying to develop a study that is not going to produce a meaningful result.”

The article goes on to say ”More than a half-dozen former high-ranking EPA, administration and congressional staff members echoed Thyne’s opinion, as did scientists and environmentalists. Nearly all the former government employees asked not to be identified because of ongoing dealings with government and industry. Two hundred pages of EPA emails and other documents about the study point to the same conclusions. The documents were acquired by Greenpeace under the Freedom of Information Act and shared with Inside Climate News.”

It is meaningful that the EPA has revealed water contamination due to fracking. But we must critically think through the irruptive dyspepsia created by the wordsmiths and opinon creators that spin this stuff.  The shallow nature of the report, the industry influence, continues to  open the cages at set loose the headline-grabbing connoisseurs bought and owned by the industry.  Our own Congressman Chris Collins was quoted in the Buffalo News as saying “ I fully expect Gov. Cuomo to reverse his previous decision to ban fracking, which was based on controversial scientific studies and made to appease far-left environmentalists.” The New York Business Council, a far right Zeitgist  organization designed to underwrite the collapse of the middle and working class (Thanks for reminding us of the importance of language Congressman Collins), also called on NYS to rescind the ban enacted by Gov. Cuomo and the NYSDEC last December.

Lets try to stay smart enough to understand who is trying to let the dogs out. woof woof.

Jay Burney is environment and ecology editor for The Public and a founder of Greenwatch, a collaborative project of the Learning Sustainability Campaign, Western New York ClimateWatch, and The Public.